If you liked the Republican nominee in 2008, you'll love Miz Lindsey Graham in 2016.

For those who follow congressional politics, Graham and McCain have been inseparable — and practically indistinguishable — from each other for more than a decade, since Graham arrived to the Senate in 2003. Graham is often spotted just feet from the Senate floor, barking into a flip phone to a staffer about coordinating press strategy with McCain, meaning that “Statement by Senators John McCain and Lindsey Graham on [foreign policy issue X]” is a frequent refrain in reporters’ mailboxes. A search of McCain’s Senate website, for example , found 239 press releases mentioning “Lindsey Graham” since 2005, many of which are from the past two years.


"Invading Iraq after 9/11and capturing Saddam Hussein was the greatest foreign policy success of the last fifty years".  "The surge worked".  All your favorite hits from the Aughties plus this decade's remix: we need ten thousand troops' boots back on the ground in Iraq to fix the mess Obama made when he pulled them out.


The Iraq War, and McCain’s unwavering support of it, hurt him with a war-weary electorate in 2008. Graham, along with former Sen. Rick Santorum of Pennsylvania , will be the only Republicans in the 2016 primary field who actually voted for the Iraq War. (Democratic frontrunner Hillary Clinton also voted for the war.)

But perhaps more relevant to the current moment, Graham is currently calling for thousands more U.S. troops to be deployed to Iraq to fight the Islamic State, and the burden will be on the South Carolina Republican to articulate to GOP primary voters what makes him different from McCain and what distinguishes this political moment from the immediate post-9/11 years, when such interventionist fervor and support for the fight in Iraq were at their peak.

Essentially Sen. Huckleberry J. Butchmeup -- he's never been married, can't imagine why -- is running for president so that he can take shots at Rand Paul.  And to be clear, he's not calling Paul a non-interventionist or even a pacifist.  He's calling him a pussy.


... Graham called Paul weak on foreign policy, saying that his Senate colleague has “been more wrong than right” and that “even Obama is more aggressive.” Similarly, McCain told Fox and Friends (in April): “He just doesn’t understand. He has displayed this kind of naiveté since he came to the Senate.”


When Lindsey Graham says you're a pantywaist... it might be time to send somebody around to whip somebody else's ass.  That is, before he tries to put wood on yours.  I'm. Just. Sayin'.


Paul and Graham clashed most recently in a debate over whether to extend the domestic surveillance provisions of the USA Patriot Act, which coincidentally were set to expire on the very day Graham launched his presidential campaign. C-SPAN cameras even caught Graham rolling his eyes, as Paul, standing behind him, decried a Big Brother-like federal government on the Senate floor.

But that made-for-“The-Daily-Show” moment obscured a much larger division, as previously reported by Yahoo News, between the two politicians and the libertarian-leaning and establishment sides of the Republican Party over what Americans should fear most: government encroachment on civil liberties or uncontrollable insurgent growth in the Middle East that could lead to an attack on the homeland.


While the GOP figures out where they are on spying on the American people -- thank goodness it stopped last night, but here it comes again this morning -- it's still on Graham to determine a broader vision for his being commander-in-chief than just more war.

South Carolina’s importance as an early primary state — the first in the South —could make Graham’s presence in the field a disruptive force for other conservatives, although recent polling from the state suggests that even though voters there have overwhelmingly elected Graham to Congress, on multiple occasions, they’re not too keen on his presidential run.


Palmetto bugs, greasy biscuits, mosquitoes as big as drones, and shrimp and grits.  Those Low Country hillbillies will certainly be separating the GOP sugar from the cane next spring. 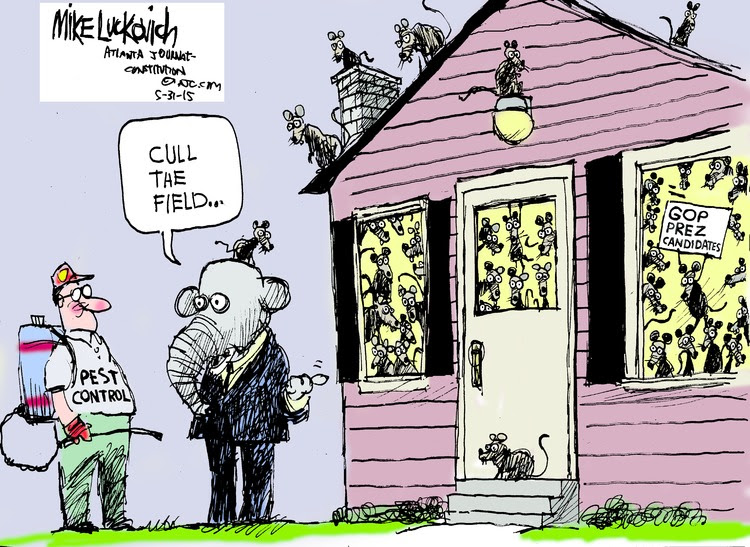 Which one will be the last rat standing?  Your guess is as good as mine.
Posted by PDiddie at Monday, June 01, 2015

Graham is the perfect candidate for anyone who thinks that the U.S. ought to set a goal of one foreign invasion a week for the next 4 years.

As I said on Twitter last night, I think the "dreamy" Don Huffines would be a great Veep for him.