In order to form a more perfect Union...

Amy Howe and others at SCOTUSblog:

The opinion seems to go out of its way not to state a standard of scrutiny. Instead, it says, "It is now clear that the challenged laws burden the liberty of same-sex couples, and it must be further acknowledged that they abridge central precepts of equality . . . Especially against a long history of disapproval of their relationships, this denial to same-sex couples of the right to marry works a grave and continuing harm. The imposition of this disability on gays and lesbians serves to disrespect and subordinate them. And the Equal Protection Clause, like the Due Process Clause, prohibits this unjustified infringement of the fundamental right to marry." That's page 22.


The Chief Justice has the principal dissent, which is 31 29 pages long. Toward the end of it, he says, "If you are among the many Americans--of whatever sexual orientation--who favor expanding same-sex marriage, by all means celebrate today's decision. Celebrate the achievement of a desired goal. Celebrate the opportunity for a new expression of commitment to a partner. Celebrate the availability of new benefits. But do not Celebrate the Constitution. It had nothing to do with it."


From the concluding paragraph of the majority opinion: "No union is more profound than marriage, for it embodies the highest ideals of love, fidelity, devotion, sacrifice, and family. ... [The challengers] ask for equal dignity in the eyes of the law. The Constitution grants them that right."


From the majority opinion, addressing the role of history in the constitutional analysis: "The nature of injustice is that we may not always see it in our own times. The generations that wrote and ratified the Bill of Rights and the Fourteenth Amendment did not presume to know the extent of freedom in all of its dimensions, and so they entrusted to future generations a character protecting the right of all persons to enjoy liberty as we learn its meaning."


Now-expected sneering contempt in the usage of the word 'pride' in Scalia's dissent.

(Scalia) leads off by saying that the decision is a "threat to American democracy." He concludes by saying that "Hubris is sometimes defined as o'erweening pride; and pride, we know, goeth before a fall ... With each decision of ours that takes from the People a question properly left to them -- with each decision that is unabashedly not based on law, but on the 'reasoned judgment' of a bare majority of this Court -- we move one step closer to our own impotence".


The majority bases its conclusion that same-sex marriage is a fundamental right on "four principles and traditions": (1) right to person choice in marriage is "inherent in the concept of individual autonomy"; (2) "two-person union unlike any other in its importance to the committed individuals"; (3) marriage safeguards children and families; (4) marriage is a keystone to our social order. "The majority finds that these principles and traditions apply with equal force to same-sex couples."


Yes, Antonin Scalia is a toad, a troll, and an execrable human being.

Scalia's dissent has an awesome footnote on page 7 (note 22): he says, "If, even as the price to be paid for a fifth vote, I ever joined an opinion for the Court that began: ‘The Constitution promises liberty to all within its reach, a liberty that includes certain specific rights that allow persons, within a lawful realm, to define and express their identity,’ I would hide my head in a bag. The Supreme Court of the United States has descended from the disciplined legal reasoning of John Marshall and Joseph Story to the mystical aphorisms of the fortune cookie." He is not happy with Justice Kennedy.


(T)he majority opinion rejects the claim that marriage is about procreation, even while saying that protecting children of same-sex couples supports the Court's ruling: "This is not to say that the right to marry is less meaningful for those who do not or cannot have children. An ability, desire, or promise to procreate is not and has not been a prerequisite for a valid marriage in any State."


That's all I'll roll out from the live-blog. Here's some MSM coverage.  First, CNN:


The 5-4 ruling had Justice Anthony Kennedy writing for the majority with the four liberal justices. Each of the four conservative justices wrote their own dissent.

The far-reaching decision settles one of the major civil rights fights of this era -- one that has rapidly evolved in the minds of the American pubic and its leaders, including President Barack Obama. He struggled publicly with the issue and ultimately embraced same-sex marriage in the months before his 2012 re-election.

"No union is more profound than marriage, for it embodies the highest ideals of love, fidelity, devotion, sacrifice and family," Kennedy wrote. "In forming a marital union, two people become something greater than they once were."

In a dissent, Justice Antonin Scalia blasted the Court's "threat to American democracy."

"The substance of today's decree is not of immense personal importance to me," he wrote. "But what really astounds is the hubris reflected in today's judicial Putsch."

This dude needs his medication. 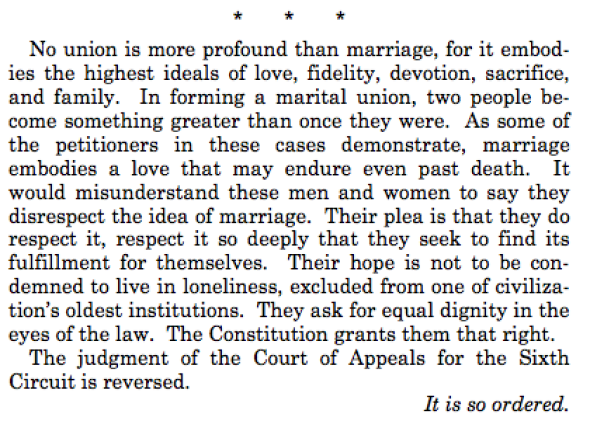