This news is a week old, and I don't follow this race as closely as others do, so I just want to mark these developments for the record.  Some people are reading tea leaves down I-10 to the west that look ominous for the former state senator/lieutenant governor candidate in her runoff against "Poison" Ivy Taylor.

First, an out-of-focus screen grab from FB from a local. 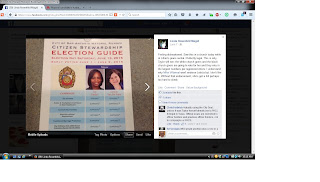 On the left is a flyer being circulated at some San Antonio churches comparing the positions of Van de Putte and Taylor on things like 'abortion without restrictions'.  No need to ask what that issue has to do with the Santonio mayor's office; everybody knows it's a trigger for the RWNJs to twist on and turn out to vote against.  The comment from the person who posted it reads as follows:

Feeling disheartened. Saw this in a church today while at Lillian's piano recital. Perfectly legal. This is why Taylor will win: the white church goers and the black church goers are going to vote for her and they vote in the largest numbers per registered voters. I understand why Mike Villarreal won't endorse Leticia but I don't like it. Without that endorsement, she's got a hill perhaps too hard to climb.


So that might be just one person's opinion, but then you have this SA blogger and a political consultant saying essentially the same thing.  If your FB settings don't let you see that...

Colin Strother called it before it started. It's looking a lot like 2005. What that means, looking back on that race, is that conservative voters will lift the second place candidate past the first place candidate in the runoff. I'm saying this from both an analytical POV and as a reminder to those supporting LVP that you cannot take this race for granted. If GOTV efforts aren't in overdrive with that campaign, the wrong people are at the helm.

After reviewing 4 days of EV I'm seeing about 11% of early voters who are e day voters coming out earlier and about 25% new voters.The race is getting negative (which tends to suppress turnout), but it is also getting salacious (which jacks up turnout) so I'm still not settled on a final count.
[...] VdP is on the rise with a steep climb ahead. The nonendorsement from Mike may throw this thing to the bigoted candidate by 2-3 points unless folks get out and get engaged.


Turnout is up, (but still low) as of the end of EV last week.  Election Day is tomorrow, Saturday the 13th.  Per Randy Bear's FB page this morning, Strother is now apparently condemning Mike Villarreal -- who was his supporter in the general -- for "being on the wrong side of history" in witholding his endorsement from LVDP.

All that follows on the heels of this (which also appeared during the EV period).

The husband of San Antonio mayoral candidate Leticia Van de Putte has acknowledged falling behind on federal, state and local taxes, but said he's all caught up now.

Pete Van de Putte's business, Dixie Flag Manufacturing Co., had more than $100,000 in federal and state tax liens over the past five years, and until last week he owed $13,000 in Bexar County levies that were due in January.

"If we still owed, if we weren't paying it, if we never made an effort," then his tax history should be campaign fodder, Pete Van de Putte said last week.

"The only thing I can say is we're current with the IRS. Yes, we've owed them money, and yes, we've paid them," Van de Putte said.


Also for the record, Houston Democratic field operative Erik Vidor, who's been assisting LVDP's campaign, remains encouraged.  (I'm guessing he comes right back to H-Town to help Adrian Garcia as soon as he catches his breath.)  As with most every election in Texas, high turnout aids the Democrat -- in this case, the liberal, as LVDP can be defined compared to homophobe Taylor, busily seeking the votes of bigots socially conservative Democrats and Republicans.

For some historical perspective, note that soon-to-be Vice President Julian Castro lost his first bid to be Alamo City mayor -- to "Republican" Phil Hardberger in 2005 -- by a close margin.  Update: I edited this sentence with quotation marks around Hardberger's political affiliation just for Noah, in the comments.

So if several of these people are wrong and Van de Putte wins, we can pop a cork and mop our brow and move on to the next.  If not, we may have an ominous signal for the Houston mayor's contest, which is that homophobia and anti-choice are success strategies.

Phil Hardberger was definitely a Democrat

Republicans elected him. Ivy Taylor is the same kind of Democrat.