The Texas Progressive Alliance is happy there's no hint of any special sessions to come, no rain for the past week, and no biker gang-police confrontations (except for this one) as it brings you this week's roundup of the best lefty blog posts from last week. 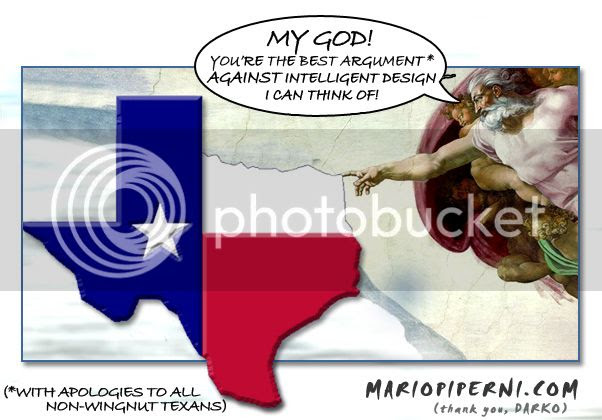 Off the Kuff notes that while Travis County is ready for the Supreme Court to legalize same-sex marriage, there's likely to be no small amount of chaos in the state once they do.

Letters from Texas explains how a recent ruling in a North Carolina redistricting case may bode well for Texas' plaintiffs.

LightSeeker at Texas Kaos calls "ethics reform" in Texas for what it is. Government is for, by and of the highest bidder. Texas leads the pack. Texas Ethical Reform - DOA.

SocraticGadfly, reading about a new study that claims classical psychological conditioning during sleep can reduce racist tendencies, has two thoughts: it's either too good to be true, or, if it has real and lasting change, it's probably got an element of Clockwork Orange.

CouldBeTrue of South Texas Chisme is glad the McAllen ISD and others are taking care to feed children during the summer.

Do you think Greg Abbott's first legislative session as governor was a success or a failure? PDiddie at Brains and Eggs wants to know.

WCNews at Eye on Williamson thinks the threat was enough for the clandestine video scheme that may have changed the game on the budget and taxes in 84th Texas Legislature: Timing is everything.

TXsharon at Bluedaze details the cost of the Texas Railroad Commission's denial of the existence of frackquakes.

Egberto Willies thinks we need more than a 'listening' and 'learning' tour from Hillary Clinton at this stage of her political career. Policies, please. (And he got a response from her, this past week in Houston, on voting rights.)

nonsequiteuse missed the mayoral arts and culture forum, but it got her thinking about getting arts organizations out of their silos and engaged as advocates for progressive change.

On her long road seeking the presidency, one of Hillary Clinton's greatest challenges will be to re-create the infamous coalition of 2008. This week at Texas Southern University, she worked hard to mend some fences, and shared some important views on voting rights.

Neil at All People Have Value offered a framework about how to live our lives. APHV is part of NeilAquino.com.

Texas Watch celebrated its victories from the legislative session.

Grits for Breakfast can't wait to see if the state's new junk science writ will be interpreted broadly or not.

The Texas Election Law Blog asks if our government is supposed to represent everyone, or just everyone who is allowed to vote.

The Texas Living Waters Project warns of a new environmental danger to the Brazos River.

Paradise in Hell is not impressed by Rick Perry 2016.

Texas Vox managed to find a few small rays of hope from the legislative session.

Equality Texas produced its report card for the 84th Legislature.

And Fascist Dyke Motors got stranded in the future.
Posted by PDiddie at Monday, June 08, 2015

The bikers should remember the old Texas phrase: You dance with them what brung you.

And, the strip mall with the Twin Peaks is nice otherwise — stores include a World Market and a mini-Cabelas.