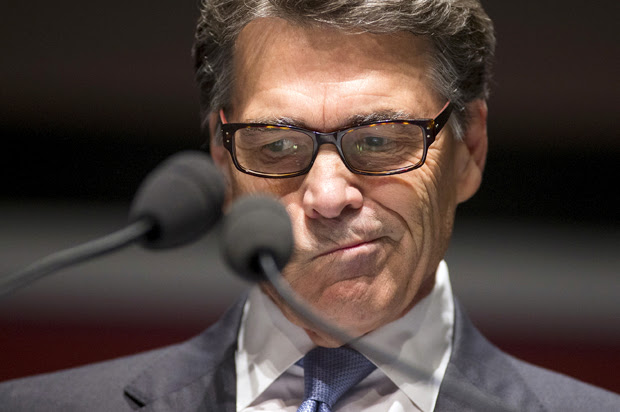 -- Rick Perry's up and running, as of 2 a.m. this morning and, formally later today, live from Addison.  Jeb Bush will be also -- after some pointed legal criticism -- in a couple of weeks.

-- Lincoln Chafee, in his announcement yesterday, wants Edward Snowden to come home, the US to convert its weights and measures to the metric system, and negotiations with the IS to be on the table.  There's bound to be a few people outside Rhode Island, where he was both senator and governor as a Republican, for which that platform represents hope and change.

-- Ted Cruz has been telling a weak joke about Joe Biden for some months now.  This time he told it just after Beau Biden passed, so it came off a little worse than previously.  The audience still laughed heartily.

Afterwards when he was asked about the appropriateness of the timing of the joke, he stalked off from the reporter who questioned him about it.  Crooks and Liars characterized his behavior as 'sociopathic'.  I wouldn't go that far -- his actions haven't resulted in people dying, like those of Rick Perry and Greg Abbott (denying Medicaid expansion) -- but Cruz is a turd and a massive jerk, and just because somebody died doesn't mean he's not going to make a joke about it.  He'll just make sure he does so when there aren't any cameras or microphones present.

-- The Duggars continue to make excuses for their son's child molestations.  Cringe-worthy.  Mike Huckabee wasn't available for comment after the Fox News interview with the family patriarch last night, by all indications.  If he still wants to be president, he should keep doing that.  Making himself unavailable for comment on this matter.

Update: State Rep. Bill Zedler of Arlington chimed in today, saying "The Left hates the Duggars because they have standards".  We were running on stupid fumes until this moment.  Now we have a full tank again.

"I don't need anybody crapping all over what I do for a living," the founder of $9.2 billion hedge fund firm Omega Advisors said.

"[She] hangs out with all these people in Martha's Vineyard and in the Hamptons and then the very first thing she has to say is to criticize hedge funds," he said.


It's all crap, Leon.  You should know this.  This crap coming out of her mouth is the full extent of what is being passed off as Hillary's progressivism.  Everybody in the whole wide world knows it except for you, Leon.  (And maybe Ted.)  So stop taking it personally.
Posted by PDiddie at Thursday, June 04, 2015

PDiddie said...
This comment has been removed by the author.
8:35 AM