The Texas Progressive Alliance thinks even Ted Cruz deserves affordable health insurance as it brings you this week's roundup. 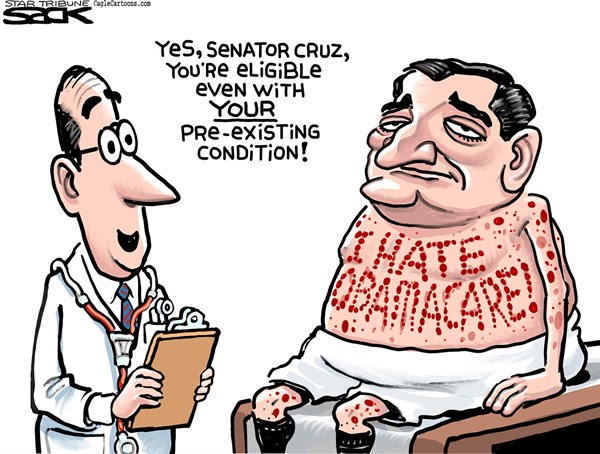 Off the Kuff hears the death rattle of the anti-gay forces.

Horwitz at Texpatriate makes an early pick and endorses Sylvester Turner for mayor of Houston.

Libby Shaw at Texas Kaos and contributing to Daily Kos is pleased to see the H-Town's daily newspaper called out Ted Cruz for being all about Ted, in The Houston Chronicle spanks Ted Cruz.

Houston's LyondellBasell refinery's management turned off an advance warning system near the front gates of the plant, where striking USW workers walk the picket line. PDiddie at Brains and Eggs says that if this is how they demonstrate their concerns for worker safety, it's no wonder they won't end a work stoppage despite the national settlement.

Neil at All People Have Value said you should make an effort with the people in your life as part of a complete outlook on life. APHV is part of NeilAquino.com.

From WCNews at Eye on Williamson: Bad things happen when a bunch of government haters try to run the government like a business. This is what happens when we turn government over to corporations.

Bluedaze logged all the Texas (and Oklahoma) frackquakes this past week.

Bay Area Houston offers a guide to the Texas legislators who are stealing campaign donations and taxpayer money.

Grits for Breakfast hopes the state loses that specialty license plate case, though not for the same reason as the plaintiffs.

HOUequality provided the latest update on the HERO petitions trial, noting that it comes down to 8,500 signatures that the judge has ruled illegible.

Purple City thinks the legislative attempt to kill the private high speed rail line may not amount to much.

The Texas Election Law Blog explains what recent SCOTUS decisions on voter ID and redistricting have to do with pending litigation over those issues here.

Raise Your Hand Texas testified against the voucher bills in the Senate.

And Fascist Dyke Motors has the second part of a family mystery, involving a talking tree and Charles Bronson.
Posted by PDiddie at Monday, March 30, 2015