Houston PD tracks your cellphone without a warrant, and that's okay by the DA 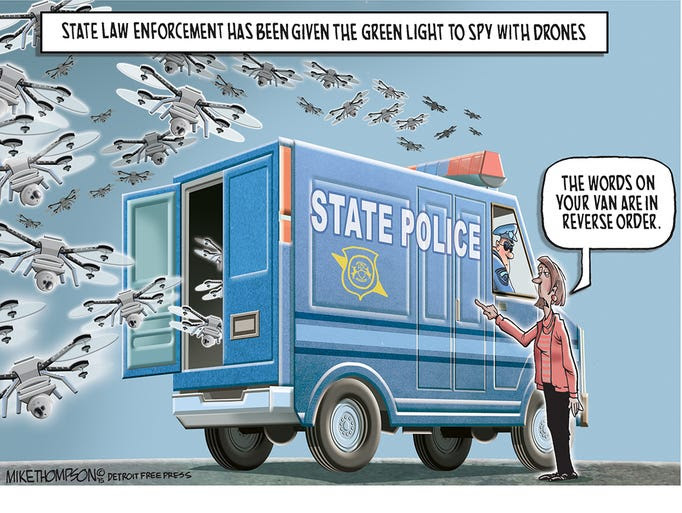 I don't know why these things shock me any more, but they do.  Maybe it's because they keep saying, "Don't worry; trust us".

Back in September, HPD officer James Taylor lamented how the Edward Snowden leaks had spooked the public into thinking that even local law enforcement agencies were part of a broad, indiscriminate surveillance dragnet that gathers data on unsuspecting Americans.

"We are not the NSA nor the federal government," the HPD officer told members of a Senate State Affairs Committee. A PowerPoint slide he'd prepared for the occasion flashed up on the screen: "STATE AND LOCAL LAW ENFORCEMENT DO NOT 'SNOOP!'"

Maybe, maybe not. The problem, privacy advocates say, is we don't know. What we do know -- actually, what we've known for quite some time -- is that HPD has the technology to sweep up cell phone data in real time, deploying a device that essentially mimics a cellphone tower and tricks your phone into communicating with it. And, according to local prosecutors -- who, it should be noted, admit they don't know how local cops are using the technology, either -- HPD doesn't need a warrant to use it.


So Stingray.  Which has been mentioned here and by others a few times in the recent past.

Careful going forward; this gets a little complicated.  Michael Barajas at the Houston Press has done an excellent job breaking it down, though, so I'm going to roll out a heavy excerpt from his piece.

In September, HPD officer Taylor and Bill Exley, an assistant prosecutor with the Harris County DA's office who works with local cops to help solve (in his words) "blood and guts cases," warned state lawmakers that, under their interpretation of state law, local cops do need a warrant to gather sensitive cell phone data from a phone company (not messages or call contents, but data showing where you've been and logs of your incoming and outgoing calls). This is despite virtually everyone else saying a state appeals court ruling from last summer called Ford v. State cemented the fact that cops don't need a warrant to get your metadata from a phone company.

It's unclear why the Harris County District Attorney's Office would take this rather unique stance -- the state prosecutors association, for instance, has said that, in light of the Ford case, metadata held by a phone company is most certainly not protected by the Fourth Amendment. Exley basically told lawmakers that the current law is complex and that no matter how they read it, cops always come away needing a warrant to get metadata from a phone company. Perhaps. The more skeptical among us might think Exley and Taylor were trying to scare legislators away from passing stricter privacy rules this session that would explicitly add a warrant-for-metadata protection to state law. (Taylor, for instance, told the committee that securing warrants for phone data "results in us not being able to investigate cases, which results in people dying.")

But if HPD wants to gather that data directly from the source, i.e. directly from your phone, no warrant is necessary, Exley says.


There's a whole lot more that you should read there, but let's finish here with this part.

As MuckRock first uncovered last year, police departments buying Stingray devices from Harris Corp. (the manufacturer of Stingray technology, no relation except as vendor to Harris County) must first sign a nondisclosure agreement with the FBI. And as the Houston Chronicle reiterated last week, that nondisclosure agreement means even local prosecutors don't know the specifics of how HPD is using its fake-cell-phone-tower devices.

That doesn't seem to bother Exley much. In emails last week, he told us that police using "historical data" gleaned from cell phone companies is a completely different issue than police tracking someone with "live data" sucked up by a Stingray. Exley says that, according to his understanding (again, this is all relatively speculative since HPD won't talk at all about how they use the devices), HPD only deploys Stingrays in a pretty narrow set of circumstances -- for instance, when police are trying to track down a fugitive with an arrest warrant.


I don't see much point in having a smartphone any longer, unless you just don't mind having NSA and CIA and HPD listen in as you take a dump.  You can probably guess that the nerdy kid down the block has also figured all this out and has mail-ordered the technology from Amazon, had it delivered via their drone, hacked into that and has it hovering outside your bedroom window.

With the news earlier this week that CIA has been working on cracking the security for Apple phones and tablets for years now, you can forget about that alleged security blanket as some protection of your privacy (let's note that this fellow calls bullshit on Jeremy Scahill, Josh Begley, and the Intercept, the first link in this graf).  In reference to the toon above... at the rate we're going, of what serviceable use will drones actually be?  Everybody already knows everything there is to know about you as it is.
Posted by PDiddie at Wednesday, March 11, 2015