So today, or maybe yesterday, is the day that Meerkat officially became the social media tool of the 2016 presidential election. The iPhone application, which allows Twitter users to stream live video footage to their followers, debuted at South By Southwest last week and has now firmly caught on with politicians and political reporters. It's not just the kids. Jeb Bush is meerkating. Dan Balz is meerkating. This is happening.

Dan Pfeiffer, the former senior Obama aide, was in Austin for South By Southwest this year and was quite smitten: "Everywhere I have gone here at South by Southwest... people are talking about Meerkat. And if that same discussion is not happening at every media outlet and presidential campaign around the country, they are making a huge mistake," he wrote on Wednesday. "If 2004 was about Meetup, 2008 was about Facebook, and 2012 was about Twitter, 2016 is going to be about Meerkat (or something just like it)."

Women are much more likely to be victims of intimate partner violence with 85 percent of domestic abuse victims being women and 15 percent men. Too many women have been held captive by domestic violence -- whether through physical abuse, financial abuse, emotional abuse or a combination of all three.

We are inundated with news stories about domestic violence , from athletes beating their significant others in public elevators or in their own homes to celebrities publicly abusing their girlfriends. This problem is not one that will go away quickly or quietly.

As Domestic Violence Awareness Month comes to an end, discussions about intimate partner abuse and its horrible repercussions should not. In an attempt to illustrate the gravity of abuse all genders (but largely women) face in the U.S., we rounded up 30 statistics on domestic violence.


I had to take my anti-nausea medication, but I got through the entire article.

-- More photos of our national moral stain are on the way.

A federal judge ruled on Friday that the U.S. government must release photographs showing the treatment of detainees in U.S. custody at the Abu Ghraib prison in Iraq and other sites.

Judge Alvin Hellerstein in Manhattan ruled that his order would not take effect for 60 days to give the U.S. Department of Defense time to decide whether to appeal.

The order is a victory for the American Civil Liberties Union, which filed a lawsuit against the government in 2004 seeking the release of the photographs.

"The photos are crucial to the public record," ACLU deputy legal director Jameel Jaffer said in a news release. "They're the best evidence of what took place in the military's detention centers, and their disclosure would help the public better understand the implications of some of the Bush administration's policies."

The Department of Defense did not immediately return an email seeking comment.


There are more than 2000 of these pictures, which means the ones we have seen before amount to less than one-tenth of the total.  And that's just the evidence of torture and abuse that was photographically documented.

US war criminals are still on the loose.

-- Bernie Sanders, who will make a "campaign" appearance in Austin on the last day of March, will offer to amend the Republican budget, calling for an income tax surcharge on the wealthiest among us -- millionaires -- in order to finance increases in defense spending and the next military aggression (read: Iran). 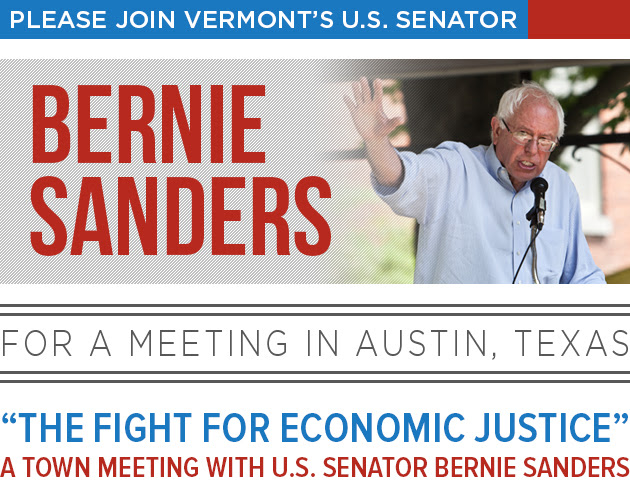 The “war tax” will be one of the first Sanders will introduce during the vote-a-rama next week. During the back-to-back votes, senators are allowed to submit an unlimited amount of amendments.


“The Republicans took us into protracted wars in Afghanistan and Iraq — and ran up our national debt by trillions because they chose not to pay for those wars. Instead, they put the cost of those wars on our national credit card,” Sanders said in a statement Friday.

“Wars are enormously expensive, not only in terms of human life and suffering, but in terms of the budget. If the Republicans want another war in the Mideast, they are going to have to tell the American people how much it will cost them and how it will be paid for,” he said.

You want a war, Louie?  Your credit is declined.  Cash in advance.

-- A Wisconsin federal judge has overturned the law there that requires doctors performing abortions to have hospital admitting privileges.  You may recall that in Texas, it's law now and remains so by virtue of the 5th Circuit.  So we have another American freedom -- that of a woman's right to choose whether or not she will give birth -- on its way, eventually, to the Supreme Court.

AMERICA FUCK YEAH! doesn't just apply to guns, after all.
Posted by PDiddie at Saturday, March 21, 2015