It's mutiny, not treason.

Here's where I need to say "IANAL", and that I know nothing about the Uniform Code of Military Justice (which applies more to Sen. Joni Ernst as a military reservist and signatory to Sen. Tom Cotton's letter than it does him), but it certainly seems as if someone who holds both a Bronze Star and a Harvard law degree should know better than to have stepped on the line of the Logan Act, or demonstrated what a US Army general refers to as mutiny.

“I would use the word mutinous,” said (retired Major Gen. Paul D.) Eaton, whose long career includes training Iraqi forces from 2003 to 2004. He is now a senior adviser to VoteVets.org. “I do not believe these senators were trying to sell out America. I do believe they defied the chain of command in what could be construed as an illegal act.” Eaton certainly had stern words for Cotton.

“What Senator Cotton did is a gross breach of discipline, and especially as a veteran of the Army, he should know better,” Eaton told me. “I have no issue with Senator Cotton, or others, voicing their opinion in opposition to any deal to halt Iran’s nuclear progress. Speaking out on these issues is clearly part of his job. But to directly engage a foreign entity, in this way, undermining the strategy and work of our diplomats and our Commander in Chief, strains the very discipline and structure that our foreign relations depend on to succeed.”

The consequences of Cotton’s missive were plainly apparent to Eaton. “The breach of discipline is extremely dangerous, because undermining our diplomatic efforts, at this moment, brings us another step closer to a very costly and perilous war with Iran,” he said.

“I think Senator Cotton recognizes this, and he simply does not care,” Eaton went on to say.


If you'd rather have it illustrated, then here you go. 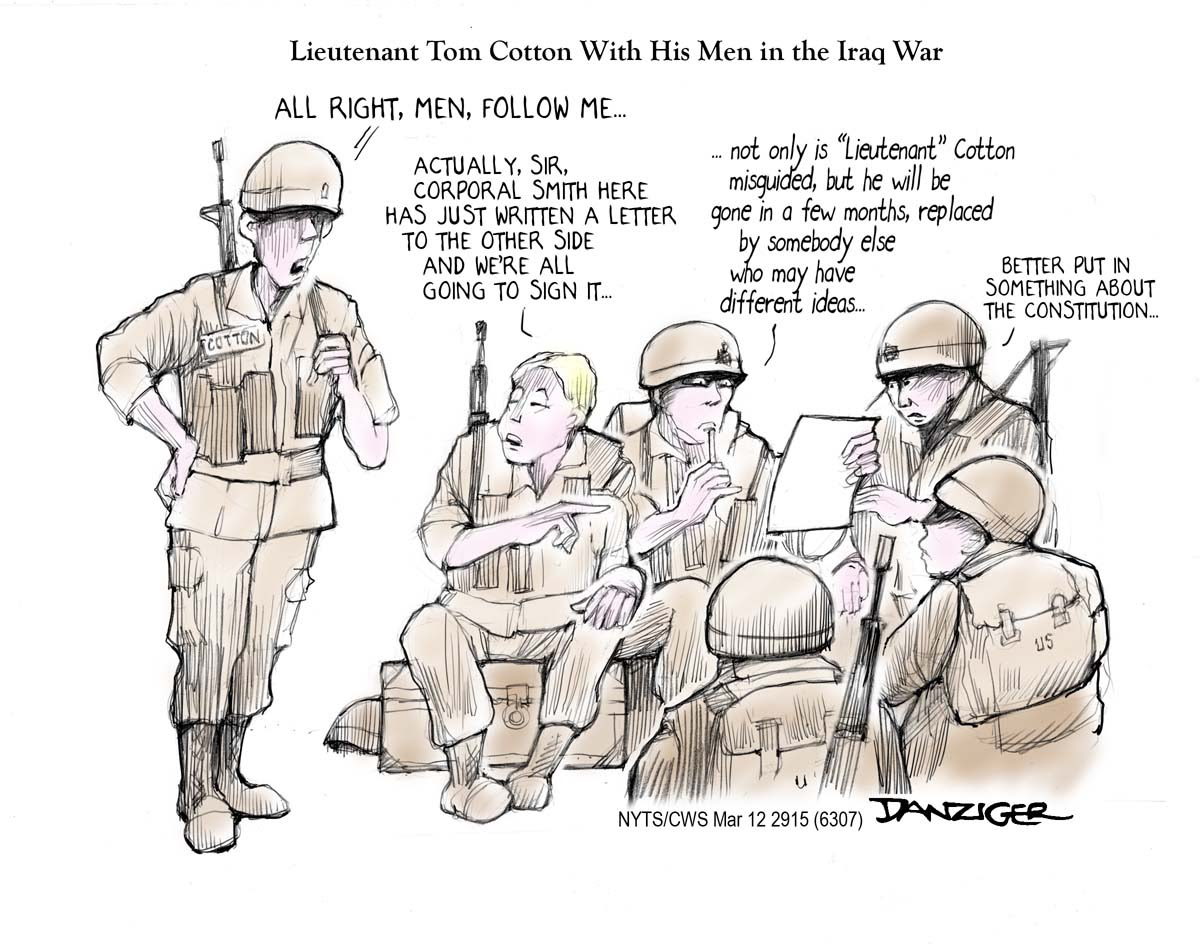 When in doubt, pull out your trusty pocket copy of the US Constitution -- every true conservative carries one, you know -- and turn to the 14th Amendment, Section 3.

"No person shall be a Senator or Representative in Congress, or elector of President and Vice President, or hold any office, civil or military, under the United States, or under any state, who, having previously taken an oath, as a member of Congress, or as an officer of the United States, or as a member of any state legislature, or as an executive or judicial officer of any state, to support the Constitution of the United States, shall have engaged in insurrection or rebellion against the same, or given aid or comfort to the enemies thereof. But Congress may by a vote of two-thirds of each House, remove such disability."


Cotton's letter and the 46 other senators who signed it aligned themselves with their counterparts in the Iranian government: hard-boiled, war-mongering conservative extremists.  Both of those wish to derail the nuclear non-proliferation proposal under discussion between Iran and the United States, negotiating on behalf of the United Nations Security Council.  Some critics want to call those talks 'aid and comfort to the enemy'.  Prosecutorial discretion aside (ham sandwiches and indictments, as they say), that charge really doesn't hold any water.  The letter's contents do not reveal anything resembling aid or comfort to the people of Iran, and that nation is not even quite our enemy, as they are our ally -- not just at the moment  but for some months now -- against ISIS/ISIL/Daesh/whatever we're calling them this week.

But that's where people get the idea that Cotton's letter is treasonous; that "aid and comfort to the enemy" phrase, which is also mentioned in Article 3, Section 3, Clause 1 of the Constitution.

"Treason against the United States, shall consist only in levying war against them, or in adhering to their enemies, giving them aid and comfort. No person shall be convicted of treason unless on the testimony of two witnesses to the same overt act, or on confession in open court."


If you're still asking, "WTF does all this mean, PDiddie?" then here's a good interpretation (of the 14th Amendment, Sec. 3):

This section is stating that no person who has previously taken an oath into office (Congress, presidential, vice presidential etc) is allowed to engage in activities against or in harm to the state (country). So if someone is found to have engaged in a rebellion or is found to have aided enemies of the United States they are not able to hold office. This can, however, be ignored by a two thirds vote in Congress. (Emphasis is mine.)


So even if someone in Congress were found to have committed mutiny -- or treason, for that matter -- US Senators and Representatives can nullify that by a 2/3rds vote.  That's what happened in the late 1970s, when Congress removed the ban of CSA president Jefferson Davis from serving his re-unified country in public office (a little late for him to take advantage, to be sure).

But the best example of why there will be no consequence to Cotton or the others is that there are accused international war criminals named George W. Bush, Donald Rumsfeld, Paul Wolfowitz, et. al., and a confessed war criminal and brazen, declared intentional recidivist named Dick Cheney who roam America wild and free today, more than a decade since they committed their war crimes.  Prosecutorial discretion, as they say.

Nothing of significance is going to come of Cotton and his in-Obama's-face disgrace beyond apoplectic indignation... with the exception of petitions and Democratic fundraising letters, of course.  And every political consultant worth his salt will tell you that you can't raise nearly as much money using the word 'mutiny' as you can 'treason'.

Update: Don't believe me?  Would you believe Sean Penn?
Posted by PDiddie at Sunday, March 15, 2015