Mittens is out of the clown car, but Miss Lindsey is in 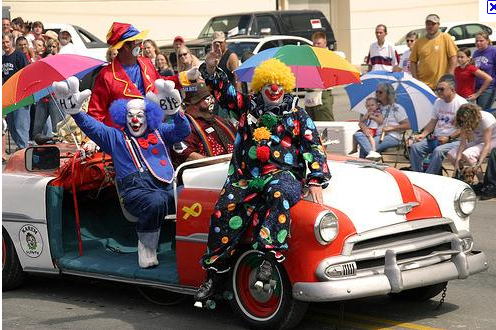 We don't need to link to Governor 47%'s withdrawal, do we?  How about Governor 39%'s clarity?  Let's excerpt it anyway just for the laughs.

During an appearance on Fox News on Wednesday, former Gov. Rick Perry told host Sean Hannity that he realized how unprepared he was to run for president in 2012.

He started an "intensive program" in late 2012, he said, with domestic policy, foreign policy and monetary policy, "so when I stand on the stage and debate this next time, you're going to see a person who is very, very well prepared and able to talk across the board about the issues that the president of the United States is going to have to deal with as we go into 2017."

Perry had gone on the program to discuss the recent developments on his pending indictments, calling the case "a badge of honor."


Video at the link.  He's going for the Dan Quayle bump, for all you millennials who don't have a clue about scorn worn as a fashion accessory.  I'm anxious to change my Twitter avatar to this, but nah gah do it until Zombie Governor Oops gets another stake driven through his heart.

The real news is the heretofore stealth candidate coming out, Madam Senatah from the Grate State a Sou' Cahalina.

The launch of the Security Through Strength committee enables Graham to raise money for a potential run. It’s the clearest sign yet that he is serious about entering the race, and comes as a flurry of White House aspirants are taking public and private steps toward entering what could be the most wide-open GOP primary in memory.

Graham is not regarded as a top-tier candidate by most Republicans and may run into problems because of some moderate views he holds.


'Moderate' once again being a relative term in this usage.

But he is known primarily as one of the GOP’s leading hawks on national security and represents an early nominating state, making him a potentially disruptive force in a fluid race. His positions on the use of U.S. force will probably put him at odds with at least one other prominent 2016 hopeful, Sen. Rand Paul (R-Ky.), who represents the growing libertarian wing of the party.


There we go: a faceoff between the Teabagging warmongerers and the Teabagging isolationists.  It's Chris Kyle's world now in Dumbfuckistan (also known as the Deep South) and Graham Cracker sees an opening to exploit.

Sen. Ted Cruz of Texas, another Republican making moves toward running, called Graham a “good man,” a “friend” and a “man of deep passions.”


Does it make anyone else's gaydar go off when sullen Republican white men talk about each other's passions?  Speaking of latent homosexuality, the thing to watch for at any GOP shindig over the next year -- and there will be one every other weekend, as we know -- is whether or not Rick Perry and Lindsey Graham are bunking in the same cabin.  (That link is probably NSF your W.)

Of course, Graham’s main problem is that he may have some skeletons rattling around in his, er, closet. His far-right opponents in last year’s GOP primary didn’t have any problems labeling him “ambiguously gay” and “a nancy boy.” Rumors about Graham on the verge of being outed pop up every once and a while, a phenomenon that will increase dramatically if he runs for president. Esquire political columnist Charles Pierce pointedly calls Graham Senator Huckleberry J. Butchmeup. (Graham’s official photo doesn’t do much to knock that nickname down.)

Needless to say, Graham insists he’s not gay. He’s done so by speculating about having a relationship with Ricky Martin, which is exactly the kind of thing that a red-blooded heterosexual would do.

Sounds as if... every "prominent" Republican i determined to get them some of that Koch money.

Hmm, if you want yet another avatar, maybe I'll do some Graham "together with" Perry photoshopping.