More than three-fifths of the Texas Progressive Alliance believe that the Seahawks should have handed off to Marshawn Lynch as it brings you this week's roundup. 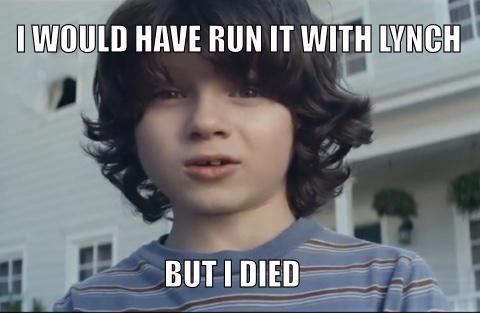 Off the Kuff writes about opposition to the Plano equal rights ordinance from transgender activists, who say it excludes their community.

WCNews at Eye on Williamson knows that Dan Patrick and the GOP are going to cut taxes no matter what, and need has nothing to do with it.

CouldBeTrue of South Texas Chisme is appalled at the racism coming from Texas Republican representatives to the US House and the Texas Legislature.

Bob Stein at Rice University's Baker Institute handicapped the Houston mayor's race much the same as PDiddie at Brains and Eggs did... two weeks ago.  And Dos Centavos posted the latest cheez.

Politicians love to talk about the economic skills gap -- where there are a lot of job opportunities out there, but not enough skilled workers to fill them. But thankfully as Texas Leftist learned, some Houston politicians are moving beyond the talk and working to actually address the issue. Plus, some big news for Texas musicians as we finally learn the fate of the Texas Music Office under Governor Abbott.

Neil at All People Have Value acknowledged the bad behavior of Texas conservatives inside and outside the Capitol last week, but also wondered when Texas Democrats would stand up in defense of justice and fairness.

Bluedaze documented the Texas earthquakes on Super Bowl Sunday.  Just the ones on that day.

Ted at jobsanger wanted to know if juvenile justice actually got better in Texas, or if that was just an illusion.

The TSTA Blog reminds us that "school choice" is not a choice for many families in Texas.

The Rivard Report predicts that driverless cars will not solve all of our traffic problems.

Mark Phariss implores the citizens of Plano not to reject its equal rights ordinance. Nell Gaither, on the other hand, argues that it excludes the transgender community.

Newsdesk explains how open carry advocates shot themselves in the foot.

Unfair Park reports that the city of Fort Worth has extended spousal benefits to same-sex couples.

Burnt Orange Report takes note of the Tea Party under way in the Texas Senate, but not (yet) in the House.

Socratic Gadfly points out to Bernie Sanders that he's taking the wrong fork in the political road.

State Impact Texas noted that the financial markets are now betting on the Keystone XL pipeline.

And the TPA welcomes Diary of a Mad Trial Lawyer, the occasional observations of former judge Susan Criss, to the Tex-blogosphere.
Posted by PDiddie at Monday, February 02, 2015