Co-opting "Green" by the media

No media was present last night -- despite about 150 who received the press release a week in advance -- for the Houston meeting of the Harris County Green Party, as about forty members and activists assembled to hear presidential candidate Jill Stein speak.  Arian Foster didn't make it either, though.

And neither did any of these people.  Thus the capitalized "Green leaders" is incorrect usage -- although Shelby Hodge, who thought she would reign on Maxine Mesinger's throne at the Houston Chronicle for the rest of her life, before the newspaper business went kaput -- did use it correctly in the body copy.

The actual Green leaders were all elsewhere.  These folks seem to be nice enough however, well-dressed in their fashionable green attire, and doing good work. 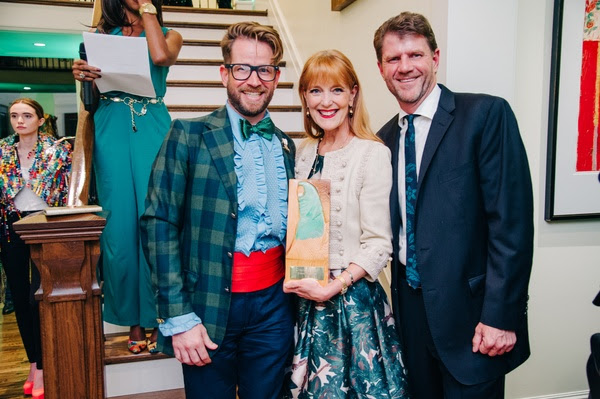 One of those pictured here is the wife of an oil company executive, author, occasional blogger, member of the board of directors for the Center for National Policy (a Democratic think tank), and formerly large Democratic Party donor.  Another is the former finance chair of the Harris County Democratic Party, now working for Lane Lewis and his campaign for Houston city council.

Again, they seem like nice folks, but I have never met either of them at a Democratic Party event, much less a Green Party one (to be fair to Baldwin, he's been present for several and even hosted a few at his combo office/swankienda, which I have missed).

The point I'm making here -- and I hope it isn't too pointed for these lovely people who attended the gala fundraiser Hodge reported on -- is that co-opting the Green Party message with green initiatives is quite a common thing.  Your recycling bin is verde-colored for a reason, after all.  There are literally millions of instances like these, and I didn't even Google that hard.

Shelby Hodge's article doesn't say how much money these green leaders raised for Recipe for Success, but we did pass the hat last night among our forty or so Greens and raised $762 for Stein's presidential campaign.

In plainer English: you can either be green or Green.  You can be both, of course.  You can even be -- as pictured above -- green and Blue.  But you can't be Green and Blue at the same time.  Unless you're me (and then everybody will be suspicious of your intentions).
Posted by PDiddie at Tuesday, February 24, 2015