-- The Democratic establishment is coalescing rapidly behind Hillary Clinton.  That's not just bad news for Bernie Sanders and (I suppose) Elizabeth Warren, but also Joe Biden.  According to Vox, she's already assembled a "murderer's row" of political consultants, advisers and strategists.  You should already know what I think about news like that.  Matt Bai's problems with the Clinton Death Star are also mine.


Witness the procession of Democratic boomers, liberals as unimpeachable as Howard Dean and Al Franken, who have lined up in recent months to endorse a candidate who isn’t even running yet and hasn’t offered a single reform one could endorse.

I’m not saying it’s all the fault of Clinton or her longtime acolytes that there aren’t other candidates coming forward to challenge her. The party’s ranks of up-and-coming politicians took a real hit during the wave elections of 2010 and 2014, and there just aren’t a ton of strong, natural contenders this time around. It’s not Clinton’s job to invent them.

But there are some potential rivals, including the more than able vice president of the United States and the well-regarded, former two-term governor of Maryland, Martin O’Malley. And at some point, if your goal is to rig this thing for Clinton, you have to look in the mirror and ask yourself if this is the kind of Democratic politics you really intended to create — the kind where the establishment decides who the nominee will be 18 months before the convention, without a single idea on the table or a single choice yet defined.

You have to ask yourself something else, too: Does trying so blatantly to steamroll the modern nominating process make it more likely that your candidate will avoid a bunch of bruising primary debates, or less so? If you got your start in Democratic politics 40-odd years ago, the answer to that one should be obvious. 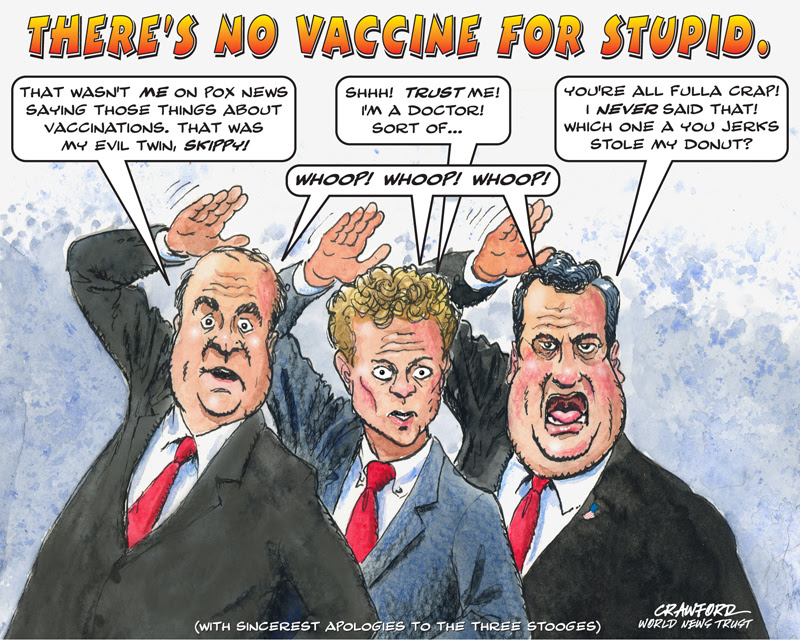 -- Rand Paul is having a bad week with both his vaccine shots and with the media, Chris Christie had a lousy week overall, and a bad week got worse for Scott Walker, as his state budget took incoming fire and forced him to retreat.  Mike Huckabee successfully navigated the vaccine minefield, but face-planted into a platter of bacon-wrapped shrimp in a Jewish deli.

Compared to these guys, the reports that Jeb Bush was a hash-smoking bully in high school count as a sunny day for the GOP field.

Update (2/6): Jon Stewart via Egberto has some fun with Hillary and the gaggle of Republicans.
Posted by PDiddie at Thursday, February 05, 2015

On Hillz, I've never seen Howard Dean as THAT liberal. I did see Franken that way, but he seems to be moderating himself with more Senate time.