According to a CNN/ORC poll taken February 12-15, the Republican field currently ranks in this order, top to bottom: Mike Huckabee (seriously?), Jeb Bush, Scott Walker, Rand Paul, Ben Carson, Chris Christie or None (tie), Marco Rubio, and Someone Else. Then there’s a four-way tie among Ted Cruz, Rick Perry, Rick Santorum and Unsure. Then comes John Kasich, and finally scraping the bottom at 1 percent each are Bobby Jindal, Lindsey Graham and Carly Fiorina. Note that Bush and Christie were numbers one and two a month ago.


Christie got roasted by the NYT a couple of days ago.


He does not return phone calls. He does not ask for support. He arrives late for meetings. And he acts as if he has all the time in the world.

The complaints have piled up for weeks, dismaying many longtime supporters of Gov. Chris Christie of New Jersey and sending others into the arms of his rivals for the presidential nomination, according to interviews with more than two dozen Republican donors and strategists.

As a half-dozen other candidates aggressively raise money and chase endorsements in Iowa and New Hampshire, friends and detractors alike say Christie’s view of his status and pre-eminence within the Republican field is increasingly at odds with the picture outside his inner circle.

Some supporters critical of the governor’s campaign blame what they call “the Christie bubble,” a tight-knit group of advisers who have known him for years and have worked for him through most of his tenure in Trenton. Virtually impenetrable to newcomers, this small group is seen as effective at home but also now as shielding him too closely from the realities of a competitive national campaign. Even after the George Washington Bridge lane closings and the resulting scandal, and amid a continuing federal investigation, Christie has not broadly expanded (the number of his closest advisers).


Saving you the click-over to the guy who made history by coining the term "Abortion Barbie", the rest of his top 10 go like this, from the top: Jeb, Walker, then Fat Bastard, Rand, Rubio (LOL), Huckabee, Poop Cruz in seventh, and then Piyush Jindal (LMAO), Carson, and in tenth, Oops Perry.

Wanna see some of the polling they aggregated?


Bush, Walker, Huckabee.  Looks like a trend somebody predicted a week ago.

Update (2/23): In the most recent TexTrib poll, Scott Walker is statistically tied with Ted Cruz at the lead. 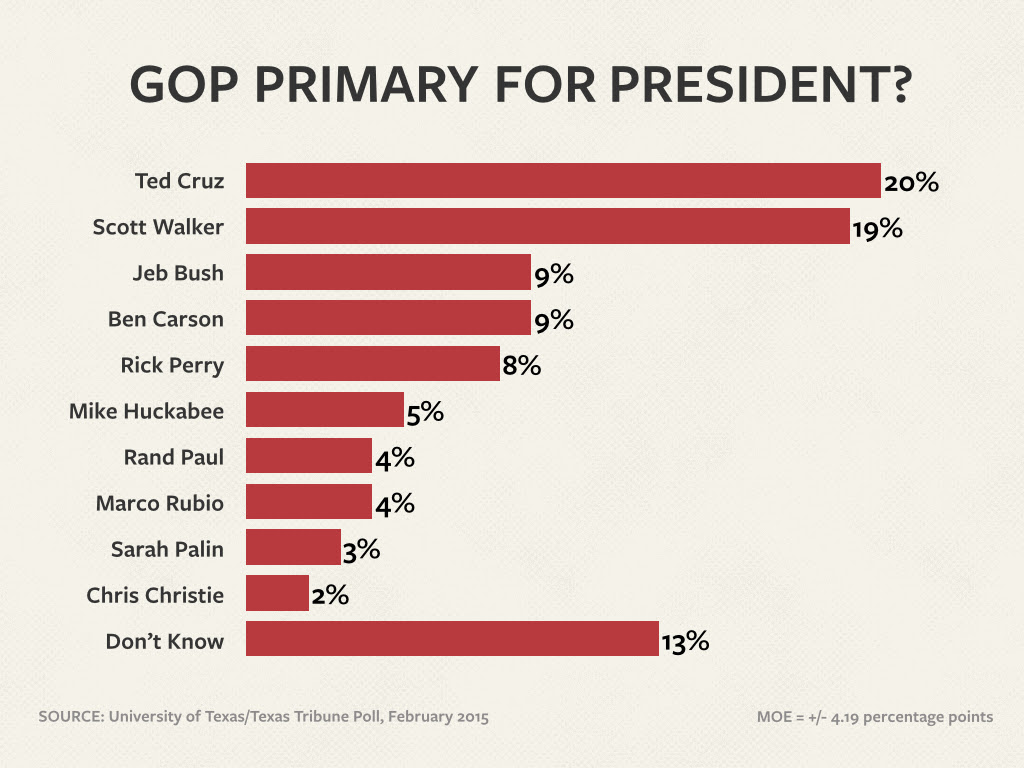