He has certainly peaked way too soon.

The question should've prompted an admission that many geopolitical problems are unavoidably thorny – that there often isn't a "big, bold, fresh idea" that would solve them.

Instead this exchange followed...


Just go read the back-and-forth between Martha Raddatz and Walker, and the analysis that follows.  It was as bad watching and listening to it as it is reading the transcript, indeed somewhat worse.  He was in completely over his head, and it was the shallow end of the pool.

Think ABC and Raddatz, or The Atlantic, is "librul media"?  How about Forbes?

When Raddatz asked, “What would you do about the 11 million undocumented who are still here?,” Walker responded, “We for sure need to secure the border. I think we need to enforce the legal system. I’m not for amnesty, I’m not an advocate of the plans that have been pushed here in Washington… we need to find a way for people to have a legitimate legal immigration system in this country, and that doesn’t mean amnesty.”

Wow…how is it possible that nobody else has thought of securing the border? This is a new and bold idea.

And while he bravely suggested that we need to ‘find a way for people to have a legitimate legal immigration system in this country,” the whole idea of having bold, fresh and new ideas is to actually propose these big solutions—not remind us that “somebody” needs to “find a way.”


I did something I never do any longer: tuned in a Sunday Morning Talking Head Show to watch a specific interview.  My motivation was to look again at Walker and see if I had missed something; has he overcome the Droopy-looking, putzy, Midwesterner-who-dropped-out-of-college bit for a fresh, smartened-up presidential contending one?  Has he gotten some sort of charisma infusion?

The answers remain 'no he hasn't', and 'no he hasn't'.  It's difficult for me to believe that the GOP is capable of nominating someone far more ignorant in every single way than George W. Bush.  As blogged previously, he should have some staying power just because the turf he's staked out is unoccupied by three other Republican wannabees.  And the first debate that includes him and Rick Perry is going to be an instant classic for the guffaws and Twitter memes alone.  This might develop into some significant problem for him, but even if it doesn't, Walker simply isn't bright enough -- JMHO, of course -- to be vice president.

Unless he's on a stage between a row of corn stalks and cornpones, he's out of his element.

Update: No More Mister Nice Blog will keep an eye on him for me. As befits a man of low intelligence, he's got a few things memorized, and when he gets knocked off his script, he's lost.

-- Stupid isn't Chris Christie's actual problem.  He knows exactly what he's doing, and doesn't care that you know.  A Dale Carnegie course won't save his campaign, and neither will Romney's exit.  Some digging produced another example of his grifting, pandering ways, and when you ladle some of his trademark arrogance over the top of that... well, let's just say that he's going to be fun in the debates too, but the South ain't gonna vote for no fatass Yankee asshole.

-- Rand Paul is going to make contempt for the media a thing again.  Unlike Walker's foreign policy depth and Christie's anger management issues, this could be of some benefit to his ambitions.  But the case for more libertarianism is failing with the emerging 'debate' over 'vaccine choice'. 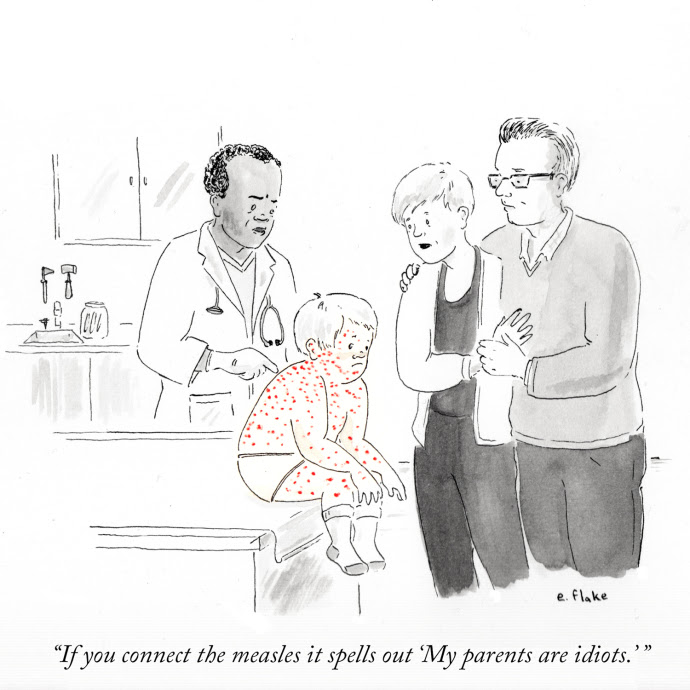 Even Rick Perry, for crying out loud, is smarter than this.  And Ben Carson, too.  The issue is still going to drop a few more aspiring presidential candidates into the hot, popping grease.  Hard for me to see how Paul avoids the fire as he eventually scrambles out of the frying pan.  The nostalgia of the conservatives for the 1950's does not extend to the understanding that childhood vaccines began to be mandated a hundred years earlier than that, and for obvious reasons.  The conservative base's contempt for science, logic, and facts notwithstanding -- and to be fair, an oddball collection of limousine neoliberals -- this nation isn't quite stupid enough yet (I think) to elect an anti-vaxxer.  If I'm wrong and it is, then we can stop worrying about climate change.  Contagion will cull the herd much faster.

-- The political consultant hot stove league has warmed up for Perry, and Ted Cruz as well.

The move raised eyebrows in Washington, because one of the firm's other founding partners, Terry Nelson, was part of a circle of advisers who aided Perry's effort at redemption after a lackluster 2012 presidential campaign, according to The Washington Post.

The positioning led some in the GOP consultant class to wonder if the firm would split alliances between the two camps.

That will not be the case, according to a statement from Nelson.

"We have great respect and admiration for Governor Rick Perry as a leader and as a person," Nelson said. "But FP1 has decided that our efforts going forward should be united in the event either Governors Perry or Bush decide to run.”

Nelson was an adviser to a nonprofit called Americans for Economic Freedom that is aligned with Perry advisers.


Here's a little about Rick Perry's money we should know.

Of the $103,537 that Rick PAC reported taking in between Nov. 25 and Dec. 31 of last year, a majority came from donors and their spouses who “maxed out,” or gave $5,000, the most federal law lets them donate to a PAC like Perry’s during a calendar year. Among those contributors are longtime Perry supporters such as Houston engineering executive James Dannenbaum, Houston investment adviser James Lee and former Astros owner Drayton McLane.


This is the only kind of TPS campaign finance reporting I have interest in: who's buying and who's selling whom.  (Ross Ramsey at the TexTrib is doing a bang-up job in this regard with respect to the Lege; more on that in a post to come.)  And here's the latest on the third Texas favorite son who wants to be president next year.

Cruz raised $100,000 for his PAC during the final five weeks of 2014 and spent just about as much to pay for its advisers, many of whom were hired in recent months as Cruz increased his travel to the country’s early-primary states. His joint fundraising committee, which gave about half of its proceeds to the PAC, collected $230,000 during that period.

This past summer, Cruz beefed up his political shop by hiring Lofstrom, communications adviser Jason Miller and strategist Jeff Roe, who runs a direct-mail firm in Kansas City.


Keeping track of the puppeteers and the money they require to keep our political system corrupted is going to remain the focus of my efforts going forward.
Posted by PDiddie at Tuesday, February 03, 2015