Your Bingo card for tonight's debate 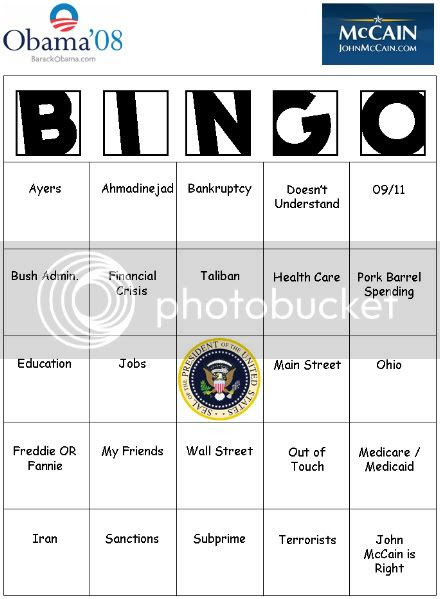 Update: What Obama should say tonight if the words 'Ayers' or 'Wright' fall out of McLame's mouth ...

John, your campaign has already said it intends to spend the last four weeks of this campaign mostly attacking me. And with the William Ayers thing, we have some idea of what kind of attacks to expect. But you folks at home, if you go to CNN's website -- and this is a bit of free advertising, I guess -- they have a thing called Campaign Fact Check. If you go there, and look up William Ayers, you'll see that they've called that attack FALSE, and you'll see exactly WHY it's false. And that's not my campaign saying that -- that's CNN! They're saying it's false.

That's why if it were just the two of us, if it were just Barack Obama and John McCain involved, and if there were nothing else at stake, I'd have no problem at all turning this election into a mudslinging battle. I've got plenty of mud for you, believe me.

But it's not just the two of us. The American people are also part of this, and if you drag this election down to that level, they're the ones who are gonna lose.

So John, will you come over here and shake my hand?