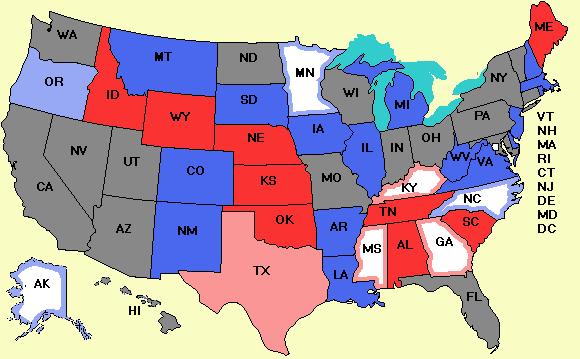 Let's show the map for US Senate races and the guess here for a filibuster-proof 60, which is coming up one vote short with a week to go.

Mark Begich over convicted Ted Stevens in AK, Mark Udall over Bob Schaffer in CO, Al Franken over Norm Coleman in MN, Kay Hagan over Liddy Dole in NC, Jeanne Shaheen over John Sununu in NH, Tom Udall over Steve Pearce in NM, Jeff Merkley over Gordon Smith in OR and Mark Warner over James Gilmore in VA are eight Democratic pickups, for the 59-41 spread I'm predicting.

That leaves one or two (so we can kick Joe Lieberman to the curb) to come from GA (Jim Martin v. Saxby Chambliss), KY (Bruce Lunsford v. Mitch McConnell), MS (Ronnie Musgrove v. Roger Wicker), and our very own Rick Noriega over John Cornyn.

I think you know which of those I'd wish for the most, but I won't be greedy; I'll take any one of them for the big-picture win.
Posted by PDiddie at Tuesday, October 28, 2008