"It used to be you'd ask your buddy, 'Where are you watching the game?' " said Armando Walle, Democratic state representative candidate in District 140. "Now it's, 'Where are you going to watch the debate?' " ...

(Last) Friday, an estimated 52.4 million Americans tuned in to watch the McCain-Obama debate — and Thursday night's crowd could be larger.

Traditionally, Thursday is a good night to watch TV; Friday is not. Besides, last week, nobody but McCain knew if he was even going to show up. Also, there's the allure of seeing a potential train wreck.

Ah yes. Train wreck or smackdown. Possibly both, and potentially for either player.

It may be the ugly side of human nature, but regular Americans, political pundits and academics who make their living dissecting just such media events can hardly wait.

"There was some underestimation of how much this election will become the mini-series of the season," said Robert Thompson, professor of television and popular culture at Syracuse University. "It's been the most exciting TV on, from the beginning of year till now."

He figures Palin will try to get through the debate by memorizing eight or nine mini-speeches. If she can do that successfully, he said, the 90 minutes will be as boring as some people deemed last Friday's debate. "The only chance for anything interesting is if the moderator, Gwen Ifill, can ask her questions that can't be answered with a push of the button and recitation," Thompson said.

"It's asking a tremendous amount from a former mayor of Wasilla and a governor of less than two years to get up to speed on foreign and domestic policies," Jillson said. "Even if she is really talented."

Thompson will be glued to his TV set, but with low expectations.

"Is Palin even competent to run for this office?" he asked. "She is making (former vice president) Dan Quayle sound like a Rhodes scholar."

The only thing that reverses the slide and gets the GOP back in the game is a gaffe-free Palin and a gaffe-filled Biden. What are the odds of that occurence? 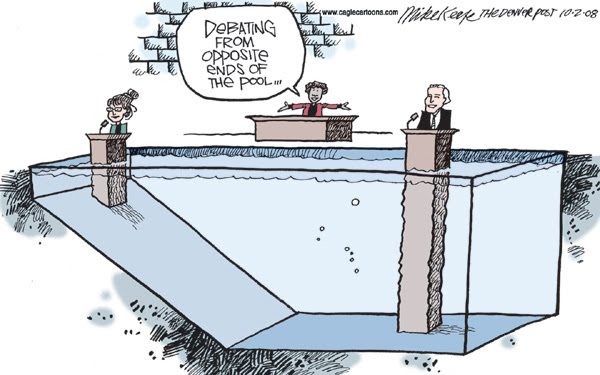 And what do our locals have to say?

City Councilwoman Anne Clutterbuck will be rooting for Palin.

"I think she's terrific, and I'm real excited about her," Clutterbuck said. "She's been involved and successful in local government, and I recognize the dedication and hard work that goes into that. ... You don't have to be in Washington all your career to be a competent leader."

Peggy Hamric, a former GOP state representative, will be rooting for Palin, too.

While Clutterbuck and Hamric hope they're wrong, Sissy Farenthold, a lifelong feminist, says she won't be voting her gender. She thinks not only that Palin has poor judgment, but that McCain exhibited poor judgment in selecting her as his VP. "He wanted to invigorate the conservative base, and he thought he might appeal to women," Farenthold said. "All I can believe is that he's not thinking about governance, he's not thinking about the issues. The whole thing is just amazing to me."

We're going out to watch it with a large group of people somewhere. I like to gauge the reaction of others, even those with whom I am simpatico. Last week I was increasingly incensed as Obama played nice to McLame's nasty, complimenting him, saying "Senator McCain is exactly right about ..." about four times too many, and generally not doing what I thought he should do, which was bust the old man in the mouth. He threw a few elbows and a couple of left jabs, yeah, but not nearly enough counter-punching to suit me. Turns out I was mistaken about how that would be perceived by the majority, however.

Biden cannot do anything aggressive at all toward his overmatched counterpart. He must be direct, deferential, keep the focus on the Republican standard-bearer's shortcomings, and when Ms. Palin trips and falls, stand quietly. Hell, maybe he should even help her up.

I just hope there aren't too many cringe-worthy moments. For either person.
Posted by PDiddie at Thursday, October 02, 2008