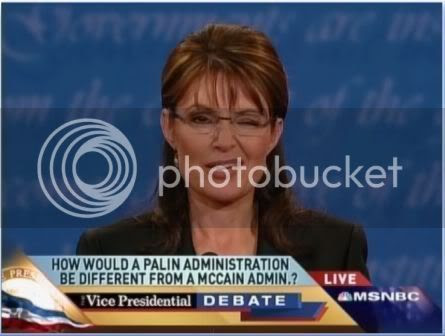 Palindrome n. Words or phrases so recited and generic in nature, they can be read in either direction without changing meaning or impact.

Josephine Six-Pack didn't fall down, so she won! Kinda. Gosh.

And hey you third-graders, you get extra credit for watching the debate.

Seriously, I thought the governor started off quite well, had a few actually good moments, got confused once or twice, studied her note cards for the most part, hurt my ears with "nukular", hurt my eyes with all that winky flirty stuff, threw some red meat to the conservative base and generally spoke in mostly complete sentences.

Biden as expected was erudite, on target, and finished the last fifteen minutes strongest with his emotional response, the smackdown of McMaverick, and his solid close.

So yeah, I suppose Ms. Moosechunks stopped the hemorrhaging for the Republican ticket, but as with vice-presidential debates past the result won't ultimately affect the final outcome (think Lloyd Bentsen and Dan Quayle, though this one was never that lopsided).
Posted by PDiddie at Thursday, October 02, 2008