As Pages of Victory noted last Thursday, his mail ballot is already in the can, no doubt alongside thousands of others across the state.  That's right; many Texans are voting at this moment, and the rest of us still have to wait one more week before we can cast an early ballot in person.  The Texas Progressive Alliance's weekly roundup of lefty blog posts and news collects the final arguments from the candidates -- and the opinions from the poiliticos -- as the end of the 2018 midterm cycle draws near.  You'll still have to look at Ted Cruz and Greg Abbott way too much on your teevee, unless you're better than Quick Draw McGraw with your remote than he was with his gun.

The McAllen Monitor caught up with Beto O'Rourke as he made his latest swing through the RGV, this trip with Rep. Joe Kennedy III, which prompted a predictably shitty joke from Ted Cruz.

PDiddie at Brains and Eggs had some unsolicited advice for O'Rourke on how he should be counter-punching the Zodiac Killer.

The San Antonio Express News joined the Houston Chronicle and the Dallas Morning News in endorsing Kim Olson for Agriculture Commissioner over the incumbent, Sid Miller.  (This is a low bar, considering Miller is hot garbage as both elected official and human being.)

DNC chief Tom Perez comes to Houston this afternoon for a schedule of events. 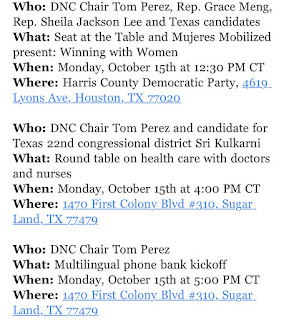 Stace at Dos Centavos was at the GOTV rally/concert with Little Joe y La Familia, hosted by Sylvia Garcia and attended by Lupe Valdez, Lina Hidalgo, Adrian Garcia, a throng of other Harris County candidates and electeds and about 200 voters and activists.  (Photo slideshow at the link.)

Progrexas links to Ross Ramsey at the TexTrib for his ten hottest state races. After the clusterf in Waller County last week regarding voter registrations and an arrest of Mike Siegel's campaign employee for complaining about it, everything turned out well in the end.


Great way to end the week: with a victory for voting rights at Prairie View A&M University.

We will continue to fight for the interests of every member of the Texas 10th Congressional District. Everyone deserves true representation! #TX10 #Maddowhttps://t.co/CnGDJexNdZ
— Mike Siegel for Congress (TX-10) (@SiegelForTexas) October 13, 2018


The debate between John Culberson and Lizzie Pannill Fletcher, originally slated for this evening, has been rescheduled for October 21 -- the night before early voting begins.

NYT's Upshot poll is back in the field surveying TX-23 (Will Hurd vs. Gina Ortiz Jones) and the early results are predicting a walk-off for the Republican incumbent.

After a two-week hiatus, Off the Kuff comes back to the Wrangle with a pair of interviews: Attorney General candidate Justin Nelson and Harris County Judge candidate Lina Hidalgo.

SocraticGadfly was at an education-related campaign forum for a group of statewide and Northeast Texas regional candidates and offers a few takes.

Jim Schutze at the Dallas Observer sees that with Dwain Caraway off to prison, the Dallas City Council is once again up for sale to the highest bidder.

Texas Vox blogged about the shocking news from the International Panel on Climate Change.  The Texas Tribune's collaboration with ProPublica, the Center for Public Integrity, and others was a long and disturbing read about the Permian Basin's contributions to the problem.  And the Houston Chronicle's piece about surging wind power generation forcing coal plants in Texas to close is a bright spot among the dark clouds.

Grits for Breakfast collated criminal justice developments for the week and led with the story from Huntsville about a prison guard who murdered a handcuffed inmate.  The correctional officer has been charged only with aggravated assault to this point.

The (guard) had been ordered by a supervisor to stay away from the inmate after a confrontation earlier in the day, but he allegedly violated orders, took the inmate into an empty shower area, and beat him to death.


Five death row exonerees will speak at this Saturday's March to Abolish the Death Penalty in Austin, reports the Texas Moratorium Network. David Collins wrote about Facebook and Twitter's censoring of progressive and anti-war websites.

Harry Hamid blogged about what he did on his summer vacation.

Finally, the TPA wishes Texas Leftist all the best as it transitions from blogging to podcasting.
Posted by PDiddie at Monday, October 15, 2018