On the whole I'd rather

... watch an Astros-Brewers World Series but I don't think that's going to happen.

[Long sidebar: When Jim Crane purchased the Houston franchise from Drayton McLane in 2011, he not only paid an inflated price (among other reasons, for reneging on a 2008 handshake deal to buy the team) and a small -- comparatively -- penalty to settle a racial discrimination case against his trucking company, he also had to agree to switch leagues with Bud Selig's franchise ... the Brew Crew.  Crane had already missed on buying the Texas Rangers in 2010 despite being the apparent high bidder because Bud didn't like him.  You can read about all of this here, except for the NL-AL flip-flop part, which you can find at Crane's Wiki page.  It says (original MLB.com link there is dead) McLane had agreed with Selig to do this before selling, but Crane wrangled $35 million back from Uncle Drayton and the league -- presumably the other owners -- to hold to that arrangement.

One more thing: Crane sued McLane a few years later because Comcast couldn't sign up cable and satellite carriers for the fees they wanted to charge for the games.  This was during the bad years, when the 'Stros lost 100 games in three consecutive seasons.  How the lawsuit eventually worked out is of little consequence -- just another quarrel over a few million dollars between two billionaires, after all -- but Comcast's sports network for Astros and Rockets games eventually went defunct and was replaced by ATT.  The team improved, people wanted to watch again, the rest is history.

So a Houston-Milwaukee Fall Classic would contain some elements of retribution -- or poetic justice if you prefer -- for the winner and the loser.] 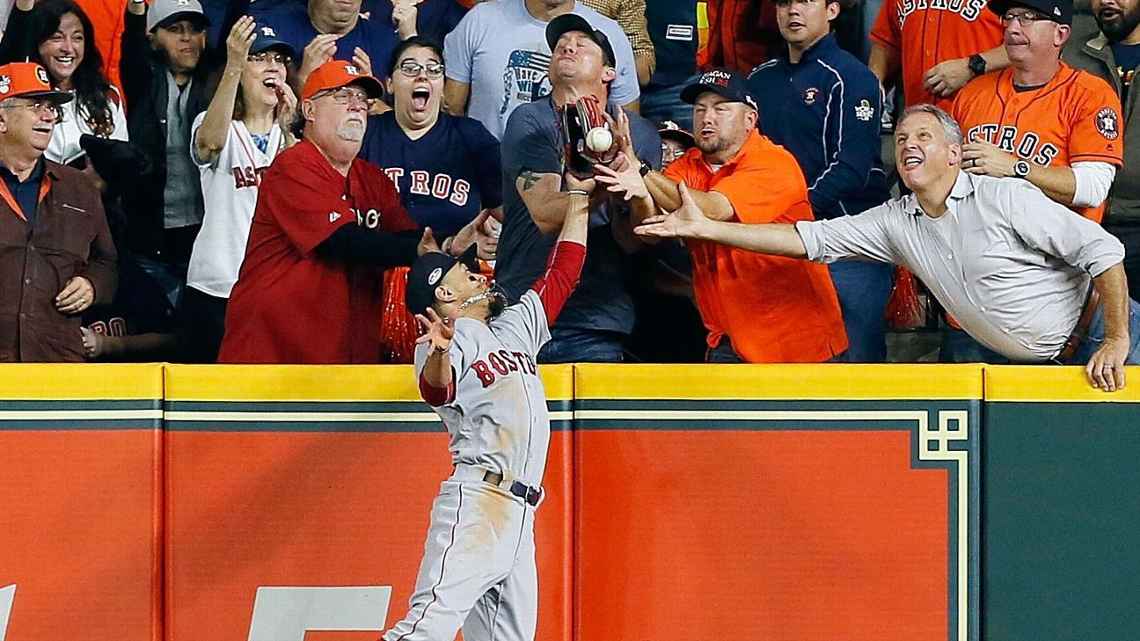 I'm not as mad about the blown Joe West/Altuve home run call as everybody else is.  That's a hard one to get right in real time.  Slow motion replay showed, to me, that Mookie closed his own glove before the ball got there (pick it up at 0:25); no fan interference.  Even if West gets it right the first time or it gets overturned, and all else being equal from there, Benintendi's bottom-of-the-9th grab sends the game into extras.  Point being: teams of destiny seem to get the breaks like that, as well as diving catches with the bases loaded for the final out, and the other stuff.

Verlander tonight, hopefully back to Boston with Gerrit Cole, who looked a little intimidated last time in Fenway, and then Keuchel, who's been no great shakes all season, but if it even gets to seven I'd be shocked.  As for the Dodgers, they will have Kershaw again in a seventh game should that be necessary, which I doubt.

Update: This best encapsulates the Astros' season, especially if you believe -- as I do -- that everything in life ultimately comes down to luck.
Posted by PDiddie at Thursday, October 18, 2018

MLB rules say you can't call interference when the ball is over the wall. Cowboy Joe blew that fucker; don't be kind to him.

And, hey, with the Stros playing, you got to avoid watching the Rockets get thumped.

Umps blow calls all the time. You can't blame losing on them. Now NBA refs? Hell to the yes you can. That zebra who got caught taking a duke a few years ago; Tim Donaghy. And what he said after he was out of the Association: this. And this.

West is old, fat, slow, had a bad angle, all of that. Yeah, he blew it. And the replay camera shooting down the wall was blocked. I don't really care for West ever since had that staring contest with MadBum a few years ago; not making excuses for him. The replay ump in NY should have gotten it right but it doesn't change the outcome unless, you know, the timeline of events from that moment in the first inning diverts to a different reality than the one we have now.

Fate. Karma. The baseball gods. All that shit you don't believe in.

I did watch Harden get his MVP trophy but nothing else.

Well, you don't believe in fate or karma or baseball gods either!

My take, noting that it wasn't the most egregious interference call in post-season history. (As a Cards fan, of course, Denkinger's crap wasn't about interference.)

Enjoy some 1970s, as well as modern, baseball history, on blown interference calls — against players, not fans.

And, karma aside, a blown call like that can change future strategery.