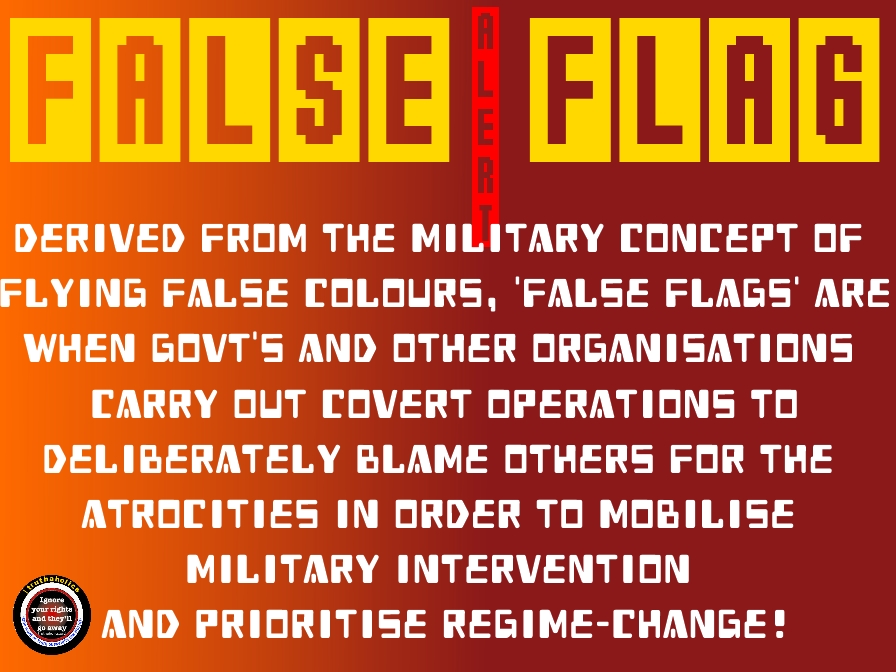 Twitter is where all the breaking news action continues to be, especially if you don't want to be spoon-fed the headlines from the teevee talking heads.  But it's important to avoid -- i.e., mute or block -- the trolls and cyberbullies.  Your personal data isn't going to be stolen and if you employ a good adblocker you won't see any spam.  Last I checked, only about 15% of the general pop had an account, so it's still somewhat of an insider's track.  Mrs. Diddie is telling me things every morning she's watching reported that I read last night.  Stay ahead of the curve.

But you also need to be able to recognize satire from serious, and disinformation, propaganda, and #FakeNews -- real fake news -- from truth.  And some good folks, like Buzzfeed here, don't enjoy having to separate the wheat from the chaff.

So with that ... I spent a little time yesterday morning false-flagging the false-flaggers.

One more #FalseFlag by the Libs to gain the Sympathy Vote for the midterms. Such an #AngryMob. #BuildTheWall around Democrats and stop them from voting #ByAnyMeansNecessary. #MigrantCaravan full of #IllEagles will try to #VoterFraud https://t.co/Q8WhonkGZY
— More Powerful Than Putin (@PDiddie) October 24, 2018


They're still hard at work this morning, though.

The usual suspects were first out of the gate; Rush Limbaugh and Michael Savage, followed closely by John Bolton butt buddy Frank Gaffney, and then MAGATwitter went rabid with it and eventually Fox News started working in the magic words, going from 'sympathy vote' to guests to Tucker Carlson laughing about the pipe sent to George Soros.

Oh yeah, the most powerful Democrat of them all, the man who was first on the mailing list, also got featured in a House GOP attack ad two days after the bomb at his home was discovered.

Ted Cruz, true to form, piled on. (video there)

(MSNBC's Chuck) Todd brought up the breaking news to the Texas senator, who claimed that the bombs were part of a Democrat scheme while blaming the media for focusing too much on Donald Trump.

“The media always focuses on the president,” Cruz said. “There are too many Democratic politicians that are actively encouraging this.”


The GOP appears to be terrified of the surging early sympathy vote.  That counter-prop machine the vast right-wing groupthink can deploy at a moment's notice is truly something to behold.  The Democrats quite obviously have neither the skill nor the will to fight like this in the realm of social media opinion-shaping.  Perhaps if they're not too scared of being shot or blown up they can manage their very own anti-Kavanaugh bump at the ballot box anyway.  #BumpVotesNotBumpStocks?  There's another weaponized boogeyman under the conservatives' collective bed, however; the swelling #MigrantCaravan of Hondurans headed for the southern border, slated to arrive on Election Day (according to Fox's Stuart Varney), ready to vote illegally.


If your news coverage of the caravan doesn't include a map like this, front and center, you're doing it wrong... pic.twitter.com/s026JJYoov
— Brian Stelter (@brianstelter) October 23, 2018


Oh wait, I got Varney wrong; he thinks that's "working FOR the president".

Yes, it's certainly hard to keep track of the daily conservative conspiracy theory.

Meanwhile, the NRA's Dana Loesch reminds you to take your gun(s) to the poll(s).  To protect yourself from all of these #AngryMob progressives... interrupting your meal at a public restaurant.

Trump said something about all of this last night, but it was about 'media hostility'.

In scripted remarks at a Wednesday night rally in Wisconsin, the president vowed to catch the perpetrator, while calling on the media to end "constant negative and oftentimes false attacks and stories".

(Trump) also called for more civility in public life, saying: "Those engaged in the political arena must stop treating political opponents as being morally defective.

"No one should carelessly compare political opponents to historic villains, which is done often."

However, the president made no specific reference to the intended recipients of the packages.