And just like that *snaps fingers* the campaigns re-focus for the sprint to the finish.

-- Besides the now-tentative TX07 debate on Monday (take note of the update) and the Beto-only CNN townhall next Thursday, there's a few more things going on in H-Town that merit comment.  First, Senator Sylvia -- soon to be Representative Sylvia -- does her part to get out the Latin@vote tomorrow.

(Click the image for a clear view; go here to RSVP for free)

Consistent readers of Brains will remember that I have written on a handful of occasions that 2018 should be a no-excuses year for Latino/a turnout.  And at least one of the times I blogged that was when the Trump administration had already declared war on immigrants, acting essentially as if all people of slightly brown pigmentation were an enemy of the state, and started sending them out of the country, whether they were legal citizens or not.

So there are circumstances under which historically low Latin@ turnout, due to the terrorism of the neo-Nazis currently in charge in Washington -- to say nothing (yet) of their junior partners in Waller County -- can be excused.

But I still don't think Stace's excuse is a good one.

And that shouldn't be interpreted as reneging on the advice that I gave everybody back here.

The simple fact, as reported now in repetitive fashion in corporate media and non-, in the mainstream and out, is that Latinxs probably cannot be turned out to vote in numbers that can sway elections in favor of Democrats.  Certainly some local elections in some states, but what these articles are telling me is that it is time to stop beating this semi-dead horse.  (No offense to the hard work of the excellent young folks of Jolt.)

There is ample evidence in Texas that it is a pretty red horse, anyway.


-- We have been reading for some time now that Beto O'Rourke's fate lies in the hands of these intractable non-voting, mostly RGV-dwelling brown voters.  But so does that of Gina Ortiz Jones, a little further up the Rio Grande along the Big Bend, and it appears she will suffer the same fate as Pete Gallegos did in SD-19's special election last month.

Yes, seemingly everybody except Charles Kuffner understands that it's not just a Latin@ problem ... it's a Texas Democratic Party problem.

-- On the bright side for Team Donkey, Harris County Judge Ed Emmett became the latest moderate (sic) Republican to endorse Democratic lieutenant governor challenger Mike Collier.  He did so in his interview with the Houston Chronicle op-ed board, which endorsed him.  I can't believe I'm agreeing with Campos; their comments are condescending and offensive.

Vote for Collier if you choose -- I cannot -- and vote for Lina Hidalgo over Emmett.  Still wondering if any of those local Republicans incensed at the incumbent over the Astrodome will betray him.

With respect to the Chronicle's endorsements generally ... disregard.  Yes, blind hogs find acorns like Diane Trautman, and you should be voting for Dem judges without me telling you to or them not.

For example, they endorsed James Horwitz's GOP opponent in the Harris County Probate Court #4 race, which made me laugh out loud.  I'm voting for neither in this contest; what's hilarious to me is thinking about how mad this must have made little Noah, who marks himself as making some progress in not voting for any Republicans this year (LMAO).

Note: If the Chronic has cut you off from seeing these articles by trying to force you to buy a subscription, I apologize.  Let me know in the comments if that's the case. 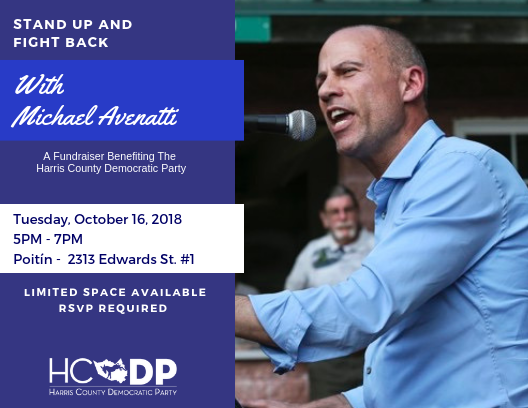 I sorta doubt whether any of the attendees are going to mention that there are some Democrats who hold him responsible for the Kavanaugh Comeback, and the subsequent Kavanaugh Bump in Republican enthusiasm that recent polling appears to reflect.

Brandon Rottinghaus, political science professor at the University of Houston, says the Kavanaugh confirmation fight has probably hardened the already deep divisions between Democrats and Republicans.

“That hardening is really translating into what we see in the Senate race in particular,” Rottinghaus says. “I think that right now, Ted Cruz has got a slight lead, and the likelihood is that’s going to continue.”


This has led to both RG Ratcliffe at Texas Monthly and Justin Miller at the Texas Observer performing Beto's last rites yesterday (something this reporter did on Monday).
Posted by PDiddie at Friday, October 12, 2018

I have written about his issue myself in-depth, starting here FIVE years ago. More and more Texas Hispanics, especially among recent entrants to the state, are evangelical Protestant, not Catholic, and they tilt GOP.

AFAIK, this is not the deal in California. It's certainly not the deal in NM, though many Hispanics there tilt GOP for other reasons and, of course, that's an even older Mexican-American community than Texas or California's.

In that piece, I said I don't expect a Dem to win a statewide piece before 2020. Still don't. Sorry, Beto.

I went further into the issue of Latin@ potential voters and "two social issues" a year later, in 2015

I updated some of this thought two years later, in 2015.

But, yeah, drive around Texas, especially smaller towns. You'll see a lot of "Primera Iglesia Bautista" churches. You'll even see Spanish-language Pentecostal churches. Dems, beyond the turnout issue, need to stop assuming that 3/4 of Hispanics in the state that do vote will vote Hispanic.

Especially next time Stace offers a Hispanic vote hot take, please feel free to pass along any of those links.

Per Campos, the Chronic's editorial board sounds about as douchey as the Snooze's.

Here are Avenatti's 20 presidential talking points. Better than Beto on M4A, but not quite a Conyers-level commitment. Not specific on what minimum wage hike is needed. Agrees w/Trump on trade, esp re China, but says better strategy needed.

If you attend the deal Tuesday, gives you some background.

What would lead you to think I would attend a fundraiser for the HCDP and pay ANY amount of money to see/hear this guy?!

Now, if I could crash, as a media member, I would, myself.

Maybe Kuff, as freelance online columnist for the Chronic, if he still has that honor, could?