It was a Q&A forum on the arts, affording little opportunity for scrapping among the seven, but Clifford Pugh provides the details anyway for those of us who track these items. 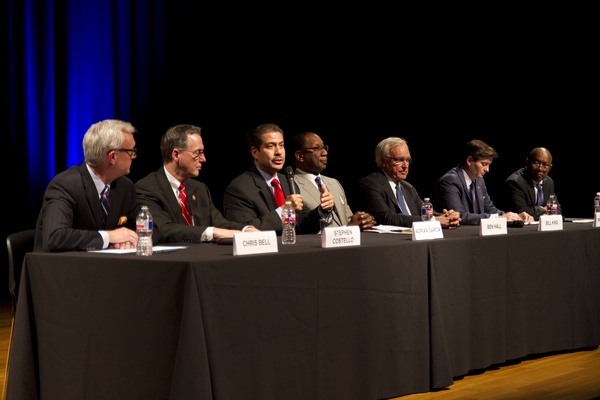 Twenty minutes into the first gathering of all seven candidates for Houston mayor on the same stage, former congressman Chris Bell noted an audience member stifling a yawn.

"It could be a lot worse. This could be a Republican presidential debate," he said, where as many as 20 candidates are expected on stage in a few months.


Bell always demonstrates the best sense of humor.  And why is Bill King so sour all the time?

While much of the evening was taken up with policy wonk questions about a cap on the Houston Hotel Occupancy Tax (aka the HOT tax), which funds arts projects around the city, the best — and most humanizing question — came from an audience member, who asked, "Who is your favorite artist and why?" You could almost see the wheels turning in each candidate's head as he scrambled to come up with an unscripted answer.

First up was former Kemah mayor Bill King, who lamely listed Van Gogh, whom he first learned about from his history teacher many years ago. Businessman Marty McVey picked the 13th century poet Rumi for the "great solace" his work provides, which drew the applause of one audience member.

Attorney Ben Hall had the most unconventional answer  — he's mad about Surrealists M.C. Esher and Salvatore (sic) Dali. "Read into that what you may," he said cryptically.


The man's name is Salvador, Clifford (or Pastor Hall, as the case may be).  Escher's name is also misspelled, despite the link to it, so we'll put both of those mistakes on Pugh and his editor, unless Hall actually pronounced it "Sal-vah-tore-ay".  Pugh still should have known better; Hall probably not.  (My guess is his disgust for Dali's nudes stopped him from learning the artist's name, if in fact he doesn't know it).  It's so easy to cull the field of prospective mayors by asking them a question that they didn't anticipate, isn't it?

Update: Those in attendance -- see comments -- report that Hall is a fan of Dali, with the phrase "mad about" in the article meaning good and not bad.  I got the wrong impression (pun intended).

The other two debates -- err, forums -- this week will be more policy-substantive, I predict.  I plan on being present for both of them.  No telling what unscripted moment may occur and reveal.
Posted by PDiddie at Thursday, June 04, 2015

I was there! I have no idea who I'll end up voting for or even who is going to run a decent campaign, but Turner definitely showed the most knowledge about the city and how government works last night.

So did Hall mispronounce "Salvatore" Dali's last name, or did Pugh at Culturemap get it wrong? I'm dying to know.

I think he must actually be a fan, because he LATER said he'd have Dali paintings up in his office and hoped that wouldn't disqualify him from office...

That's the opposite take from the Culturemap article, which left me thinking that Hall doesn't like Dali. Of course I took "mad about" to mean bad and not good, so I must have gotten the wrong impression (har har).

I'll give McVey a kudo for liking Rumi. Is there anything else to like about him?

I thought he might be the most liberal candidate in the race until he said he was inspired by Rick Perry's business initiatives (even Greg Abbott changed direction on that). Private equity investor. No name recognition, no experience. Can't get a good feel for him. Wish I was at the forum tonight.