The Texas Progressive Alliance has lots of juicy political news this week.

you can pretty much mark the exact 'shoreline' of the blue wave in houston suburbs pic.twitter.com/9oDNe3J6zi
— matt (@mattmxhn) August 11, 2019

The map above illustrates why Harris County and Texas Democrats are so excited these days, and why Texas Republicans are so worried.  'Texodus' is happening for a variety of reasons, none more obvious than Trump fatigue among college-educated women living in the exurbs of the state's metros.  Jim Schutze at the Dallas Observer connects the dots between the El Paso shooter -- who hailed from the Metroplex suburb of Allen -- and the changing demographics fueling white angst (and racism, and domestic terrorism).

Statehouse Donkeys, stealing a line from the Trump playbook, are going to use "drain the swamp" analogies against the GOP monolith in Austin.  With the Democrats filing suit against Speaker Dennis Bonnen and Empower Texas' Michael Quinn Sullivan, the controversy moved from tempest in a red teapot to the legislative committee investigation and courtroom phase.

“They are saying because (MQS and Bonnen) got together and drew up a plan to elect or not elect certain candidates, that makes them a political action committee,” (KUT's Ben) Philpott says. “That makes them an organization trying to influence an election and they did it without registering as a (PAC).”

Forrest Wilder at Texas Monthly attempts to sort it all out.

The race to stand against John Cornyn gained another entrant this morning.

Tzintzún Ramirez, 37, plans to run as an unapologetic progressive, supporting Medicare for All, aggressive action on climate change and a “massive disinvestment” in Immigration and Customs Enforcement. She has hired organizers from Beto O’Rourke’s 2018 Senate campaign and has drawn the support of some of his financial backers.

All of that will likely make her a target of incumbent GOP Sen. John Cornyn, who has already taken to branding several of the six other Democrats vying for the party’s nomination as Elizabeth Warren-style progressives.

This development undercut a couple of Texas bloggers who begged Beto last week to abandon his presidential bid and run for the Senate.  He was quite adamant over the weekend, as he mourned victims of the El Paso Walmart massacre, that he wasn't going to be doing that.  And this blogger will continue to support the Bernie progressive in this primary.

Kuffner, meanwhile, pooh-poohed on Emerson's recent polling of Texas races, including the presidential head-to-head matchups and the Democrats in the Senate primary.  And the Intercept revealed MJ Hegar's recent past as a Republican voter and a Libertarian supporter.

A lawsuit to protect the votes of those who use mail ballots from disqualification over the signature verification process drew attention this past week.

The Texas Civil Rights Project last week filed a federal lawsuit (PDF) on behalf of two Texas registered voters whose mail-in ballots were rejected based on mismatching signatures. The suit claims state law violates the Fourteenth Amendment, the Americans with Disabilities Act and the Rehabilitation Act of 1973.

“Current rules authorize untrained local election officials to arbitrarily and subjectively reject mail-in ballots if officials believe, based on their own layman analysis, that the signature on a ballot is not in fact the voter’s signature,” the suit alleges. “No advance notice is given to voters before their vote in rejected, and the decision to reject a mail-in ballot is final.”

The suit claims nearly 2K mail-in ballots were rejected during the 2018 general election based on local election officials’ determinations that the signatures did not match. The Coalition of Texans with Disabilities and League of Women Voters of Texas, among others, joined the suit.

If the ballot is rejected, local officials don’t have to notify the voter until 10 days after Election Day that their vote wasn’t counted.

In their complaint, lawyers for the plaintiffs noted that the Texas election code outlines no process those officials, who aren’t handwriting experts, are supposed to follow in comparing signatures.

The state relies “on untrained officials to ‘eye-ball’ a signature, leaving the sacred right to vote up to chance,” said Hani Mirza, a lawyer with the Texas Civil Rights Project who is helping represent the plaintiffs. “It’s time that we modernize this process and ensure that not one single Texan has their ballot thrown out for arbitrary reasons.”

In Harris County, that committee is called the Ballot Board, and its members do precisely what is described above.  This blogger performed the duties of Ballot Board Election Judge -- one of approximately thirty, appointed by the chairs of the political parties -- in 2013 and 2014.

Greg Abbott gets to fill another vacancy on the Texas Supreme Court, and everyone is hoping he won't select another white man. 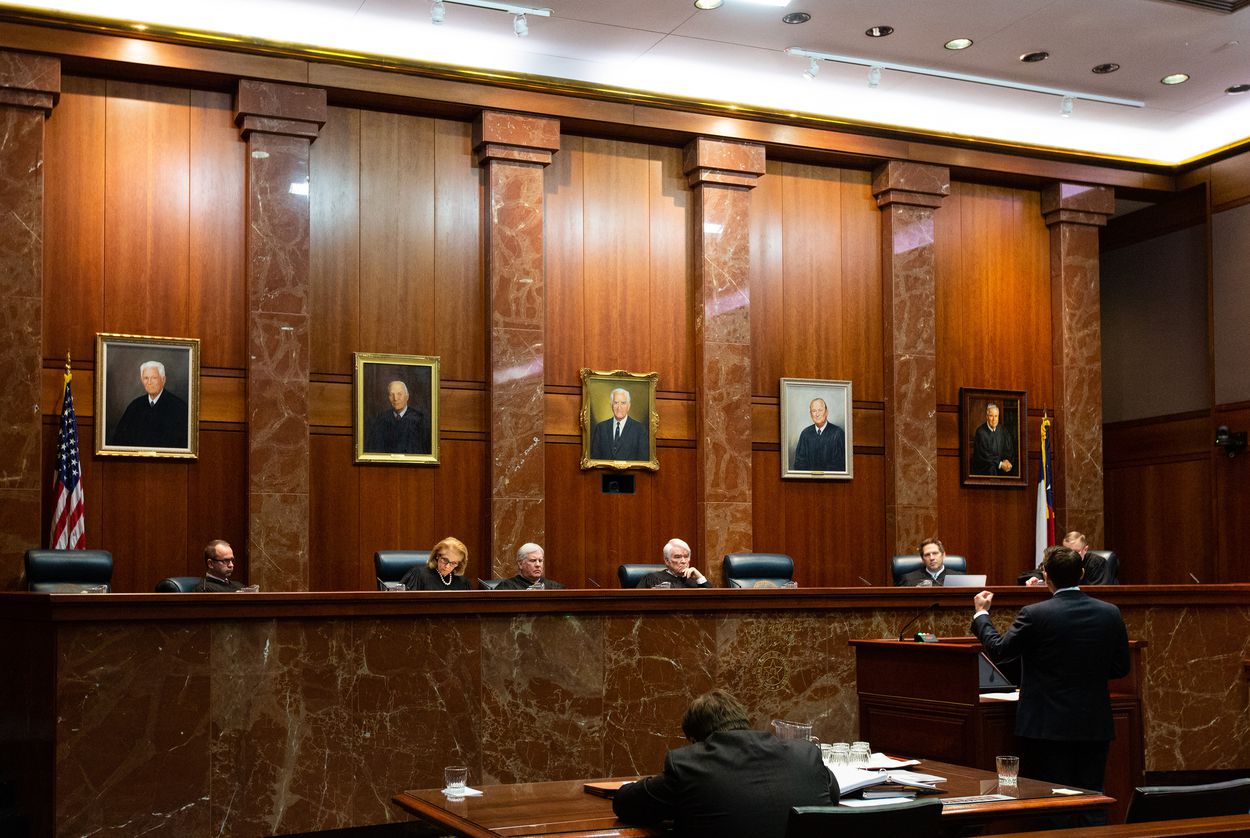 Currently there are just two women on the state’s highest civil court, the same as the number of justices named Jeffrey B.

That makeup could shift, if marginally, after last week, when one of those Jeffs -- Justice Jeff Brown -- was confirmed as a federal district judge in Galveston. That will give Gov. Greg Abbott, himself a former judge on the high court, his third opportunity to appoint a judge to the state’s highest civil court. His first two picks were Justices Jimmy Blacklock and Brett Busby, both white men.

As attention nationwide turns increasingly to inclusivity and representation in the highest branches of government, the Texas Supreme Court has actually become less diverse over the last decade.

Advocates and former judges are looking to this vacancy with hope that that will change; many in Texas’ legal circles were quietly surprised that Abbott didn’t choose a woman or a person of color for either of his appointments so far. Appointments are a powerful tool for addressing disparities in the court’s makeup and elevating diverse voices in a field that remains largely white and male.

The high court is “not just a little unbalanced, it’s a lot unbalanced,” said former Texas Court of Criminal Appeals Judge Elsa Alcala, who was the only Latina justice on the state’s highest court for criminal matters until she left the court last year.


G. Elliott Morris looks at one of the battle lines for 2020: immigration.

Gus Bova at the Texas Observer reported on the kidnapping of the director of a Nuevo Laredo shelter after he shielded some Cuban immigrants from being ransomed themselves.

Houston's Antifa found a supporter of the El Paso shooter who hails from Sugar Land, and whose father, a Koch Industries vice president, bankrolls his son's antics.

A Williamson County sheriff's deputy under investigation for sexual assault was found to have made and shared Facebook posts of a racial and misogynistic nature, KXAN via Political Dig reported.

Rey Saldana at the Rivard Report has a San Antonio lesson on climate change.

SocraticGadfly used the most recent anniversary of Hiroshima (and Nagasaki) to give his most detailed refutation yet to some leftist and liberal claims about WWII in the Pacific and the use of the atomic bomb.

Ken Hoffman at CultureMap Houston says that remediation projects at Houston Astrodome have been moved back to square one.

Two activist meetings of note on the calendar for tomorrow: Green Party Houston with its first public meeting, and the Feminist Action committee of Austin's Democratic Socialists host a panel discussion on "Before Roe and Now".  Details on both meetings at the links. 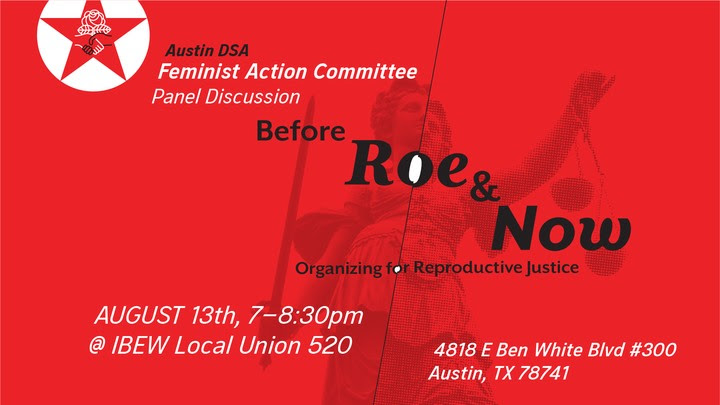 And San Antonio jazz legend Jim Cullum, who played at the Riverwalk's very first nightclub and many other venues around the Alamo City, passed away on Sunday.

(Cullum) and his ensembles also performed at Carnegie Hall and the Kennedy Center, among other high-profile venues.

Cullum also was the star of Riverwalk Jazz, a long-running live music program syndicated to dozens of public radio stations.