Democratic presidential candidate Beto O’Rourke said on Thursday he was resuming his campaign with a new sense of focus after a mass shooting in his Texas hometown, while rival John Hickenlooper ended his bid ... 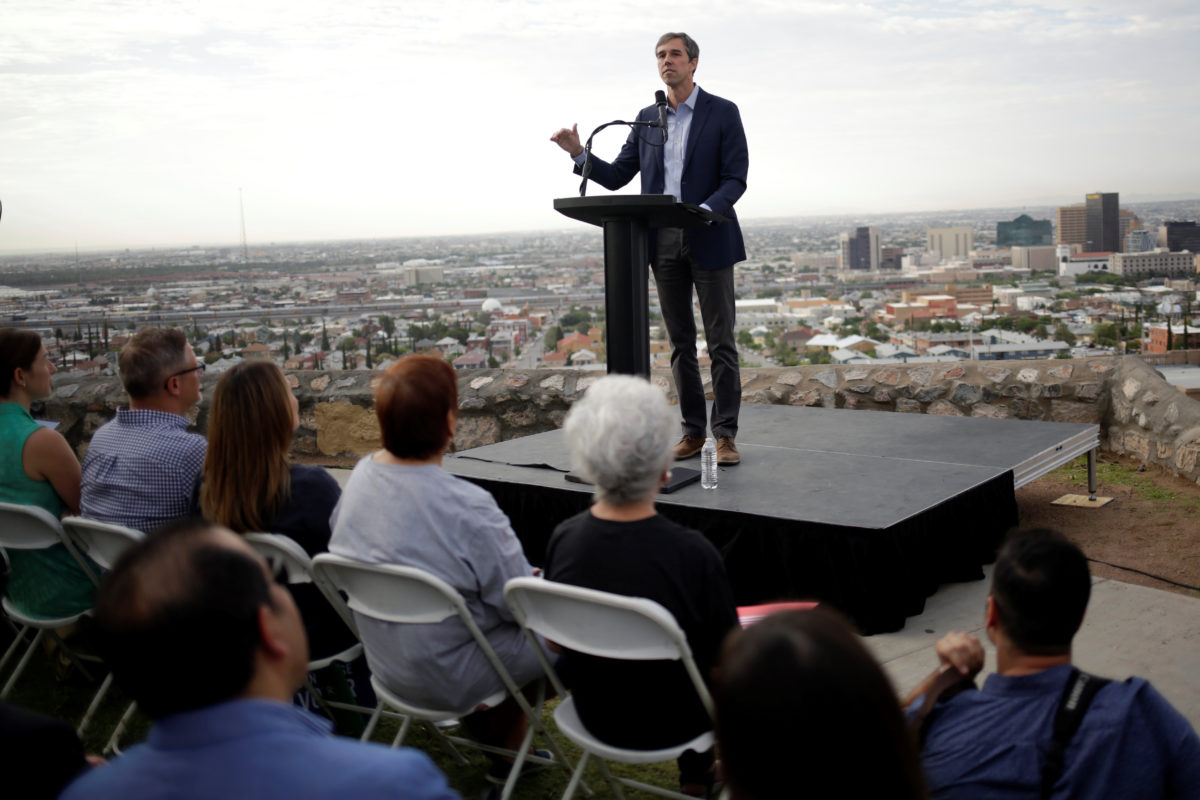 Both men have struggled with low opinion poll numbers in the historically large field of candidates running for president in 2020, and both have faced mounting calls to run instead for competitive U.S. Senate seats in their respective states.

O’Rourke, a former congressman from El Paso, rejected the idea. After a gunman targeting Mexicans killed 22 people at a local Walmart store on Aug. 3, O’Rourke said he would now use his platform as a presidential candidate to highlight the plight of immigrants and confront what he characterized as Trump’s racially charged and divisive rhetoric.

Hickenlooper, on the other hand, left open the possibility of a pivot to a Senate campaign. In announcing his withdrawal from the White House contest, the former Colorado governor said he would give such a run “some serious thought.”

Democrats need at least three pickups in the 100-member Senate next November to regain a majority. Party leaders know achieving their legislative agenda would be difficult without control of the upper chamber -- even if they win the White House and maintain control of the U.S. House of Representatives.

Democratic strategist James Manley, previously a spokesman for former Senate Majority Leader Harry Reid, said he hoped Hickenlooper’s departure from the White House scrum would “break the dam to show what is possible” to the other candidates.

“The time for these vanity projects is long gone. Some of these folks, including Beto, have got to face reality, realize they’re not going to be president of the United States and look at alternatives,” Manley said.

Another Democratic presidential hopeful with low poll numbers, Montana Governor Steve Bullock, is also facing pressure to drop out and focus on a Senate run he is seen as having far better chance of winning.

“For those that are thinking about dropping off and moving into another race, it’s much better to do it now than ... right up against the filing deadline,” Manley added.

A source close to O’Rourke’s campaign said he believes a Senate candidate cannot win Texas without a Democratic presidential nominee who is also competitive in the state. As a Texas native and former congressman, O’Rourke thinks he would be such a nominee.


State primary polling shows Beto trailing Sundowning Joe Biden, and losing to Agolf Shitler head-to-head.  National polling, the easiest to do and the most inexact, is similarly harsh.  Beto's premise, coming to us second-hand and anonymously, suggests a Democrat -- him -- might actually win Texas (extending "competitive" out on a limb).

About all I can buy of this today is that Beto as somebody's veep turns a lot of the Lone Star blue, but not our Electoral College.  The Senate contest might stand alone, or it might be part of huge tidal wave.  And things will always change.  Let's give him credit for what's going to be his Bobby Kennedy impersonation.

His campaign restart will take him on Friday to Mississippi to spend time in a state where roughly 680 food-processing workers were arrested in immigration raids last week. He will then head to Arkansas.

O’Rourke told reporters he would still campaign in traditional early-voting states, including Iowa, New Hampshire, South Carolina and Nevada. But he said he could not return to the “corn dogs and Ferris wheels” at traditional campaign events such as the Iowa State Fair, which he skipped after the massacre, given the serious issues facing the country.

“To those places where Donald Trump has been terrorizing and terrifying and demeaning our fellow Americans, that’s where you will find me on this campaign,” O’Rourke said in the speech in El Paso.

“Anybody here know how much Amazon paid in taxes last year?” Bernie Sanders asked the crowd.

“Nothing!” the crowd answered back.

“See, and I talk about that all of the time, and then I wonder why The Washington Post, which is owned by Jeff Bezos, who owns Amazon, doesn’t write particularly good articles about me. I don’t know why,” Sanders said.

The reaction has been swift and furious. Outlets ranging from NPR to CNN to Fox News have claimed that Sanders’ comments are “Trump-like” and “echoing Trump”. CNN’s segment on the story insinuated multiple times that there is no evidence for Sanders’ claims of biased coverage by WaPo.

“Sen. Sanders is a member of a large club of politicians -- of every ideology -- who complain about their coverage,” reads a statement by WaPo Executive Editor Marty Baron. “Contrary to the conspiracy theory the senator seems to favor, Jeff Bezos allows our newsroom to operate with full independence, as our reporters and editors can attest.”

"Bezos allows our newsroom to operate with full independence"

You'll be fired if you write anything that could be damaging to our corporate sponsors.


Lots more there, if you can handle the truth.  If you can't, too bad.

"@krystalball and @esaagar aired a segment on their online show Rising which is as damning an exposé on the dynamics of mass media empire propaganda as we are ever likely to witness"https://t.co/yzsF47gMlm
— Caitlin Johnstone ⏳ (@caitoz) August 16, 2019


If you're one of those Democrats who loves Rachel Maddow, thinks everything bad is ultimately the Russians' fault, declares you're voting #BlueNoMatterPoo ... you're the Resistance, and what you hate on your left is the Revolution.  You probably think Bernie's a grumpy old man who yells all the time, is too socialist to get elected, can't see yourself voting for him despite your  #VBNMW harping ...

At the extreme, you despise him and all who support him, think we're the same Russian bots as Trump's minions, get just as teeth-grindingly angry when you see him on your teevee as you do President Vulgar Yam.  So you're probably unconvinced that the corporate media has it in for him.


Remember that time CNN lied about Bernie & #MedicareForAll by contradicting itself?


No matter.  As he did four years ago with fundraising, he's changing the game again.  That's the thing about change; it doesn't care whether you like it or even acknowledge it.  It happens just the same; with you, or to you.  By the time some people realize the tide has come in, their shelter is flooded and their fire is out, while the smart ones are catching fish for supper.

Maybe they'll share a bite with you if you're sociable.

-- No change from the last Update in the number of qualifying debaters here in Our Fair City in just a few short weeks.  One week ago, in the polling wake of the Detroit debate:

Jonathan Bernstein: “On the surface, the main development was a slump for Kamala Harris, who has now dropped back to fourth place in the polls. But I’ll stick with what I said going in: Harris, Joe Biden, Pete Buttigieg and Elizabeth Warren didn’t really have much at stake in this round of debates. None of them had much to gain or lose from a modest shift in the polls. They’ll all be around for months, and will probably compete seriously in Iowa. And if Harris had to have a bad debate, this was probably the time to do it; she can learn from the experience and do better when more voters are paying attention.”

“The candidates with the most at stake were those who were in grave danger of failing to qualify for the September debates but might have still have had a realistic chance if they did well. None of them came close to doing what they needed to do. Michael Bennet, Steve Bullock, Kirsten Gillibrand, John Hickenlooper, Jay Inslee? None of them is any closer to qualifying, and that may mean the end of the road for them.”


Major Gabbard is in Indonesia for a couple of weeks, doing her National Guard duty.


Since June 28th @TulsiGabbard has hit 2-3% in over 20 legit polls posted on @RealClearNews and @NateSilver538. Number of @DNC Sept Debate “qualifying” polls? That would be ONE. RCP has us averaging 6th place in NH after Buttigieg with 5% from latest poll! #Tulsi2020 pic.twitter.com/JOeG9JVYBq
— California for Tulsi Gabbard (@CAforTulsi) August 13, 2019


Tom Steyer has almost bought his way in, but he still needs one more poll.

-- This is where we are with the leader of the pack.


Joe Biden has expressed frustration to allies that his candidacy will suffer if he is judged too harshly on the slip-ups, which he thinks he can do little to correct so long as he is being true to himself. https://t.co/aXBYyJA2ep
— NYT Politics (@nytpolitics) August 12, 2019


What is there to say?

-- There's about fifteen more links to other candidates news I could have included, but these posts are tl;dr already, to say nothing about having to eventually include Pres. Trumplethinskin.  So I'll stop here, and may add updates later.
Posted by PDiddie at Friday, August 16, 2019