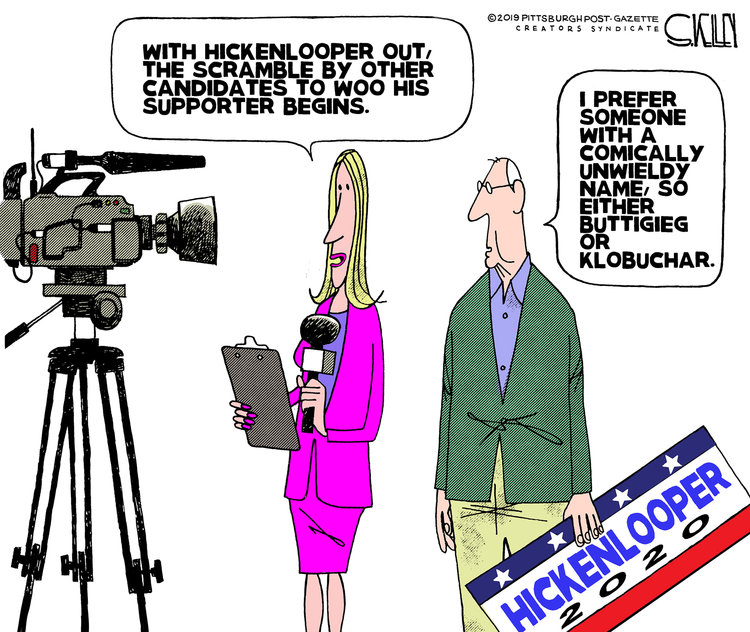 Alas, even the easier-named longer shots aren't catching a clue.

The day after Washington State Gov. Jay Inslee dropped out of the race for the White House, two even longer-shots for the Democratic presidential nomination say they’re staying put.

In interviews Thursday with the Monitor, Ryan and Delaney both acknowledged they won’t reach the polling and fundraising thresholds for next month’s third round of Democratic presidential nomination debates but aim to return to the stage for October’s fourth round of debates. Candidates have until the middle of next week to hit the criteria.

“We’re continuing to build it out so hopefully for the next one we’ll be back, which will be exciting to be on the stage,” said Ryan, an Ohio Democrat.

Ryan pointing to his performance in last month’s second round of debates, when he repeatedly criticized Sens. Bernie Sanders and Elizabeth Warren -- the Democratic Party’s top two progressive standard-bearers -- over their Medicare-for-all plans.

“People are seeing me as the moderate alternative to (Sanders and Warren),” he said.

Denial runs deep, as they say.  So does delusion.  Update:

Exclusive: Representative Seth Moulton of Massachusetts is dropping out of the Democratic presidential race. He said he sees only Joe Biden, Elizabeth Warren and Bernie Sanders as real competitors for the party's nomination. https://t.co/0qNfB0CeXx


A last word from Inslee.


The man is a class act.  Though Inslee's positions on other issues did not inspire me, you can easily see the impact of his urgency on climate chaos in Bernie's Green New Deal proposal, rolled out yesterday to wide acclaim.  Not at the DNC meeting, however, where they voted down holding a debate on the topic.

At a party conference Thursday in San Francisco, the DNC’s resolutions committee voted 17-8 against a resolution that has become a cause célèbre for activists and for more than a dozen presidential contenders who felt the traditional debate format failed to adequately address the looming threat of catastrophe. The issue could resurface during the full committee’s general session on Saturday.

It was a predictable outcome. Top brass at the DNC opposed the climate debate from the get-go, fearing it could sow discord in the base and hamper the eventual nominee in the general election. CNN and MSNBC announced plans last month to host forums on climate change in September. (Details on both fora appeared in this Update; scroll down past Kathy Griffin.) DNC Chair Tom Perez affirmed the forums in a resolution introduced earlier this month, which some activists saw as setting the stage for voting down the climate debate.

Symone Sanders, a senior adviser of presidential candidate Joe Biden, was among those who urged the DNC on Thursday to vote down a climate debate, saying it would be “dangerous territory in the middle of a Democratic primary process.”

That contrasts with what Biden had earlier said during a campaign stop in Iowa this summer. The former vice president had endorsed having a climate debate, telling Greenpeace, “I’m all in.”

Sen. Kamala Harris of California initially declined CNN's invitation (to appear at their Climate Crisis Town Hall), citing a scheduling conflict (a fundraiser with large contributors). But her campaign informed CNN (this past) Tuesday morning that the senator would participate.

Democratic presidential candidate Julián Castro tweeted Tuesday morning that he has achieved the polling requirement to qualify for the primary debate in Houston this fall.

Castro received 2% in a CNN poll conducted by the survey and research firm SSRS that was released Tuesday.

Castro has had another very good week; he released an animal welfare policy to extensive plaudits and appeared at the #NativeForum in Sioux City, Iowa.  There he made, IMO, the best impression of all the Democrats who spoke.

I believe @JulianCastro was one of the only candidates that gave a direct land acknowledgment in his presentation at the #NativeForum. #NativeVote2020 -- we need more of that. https://t.co/LtnYS5fOsw
— Dallas Goldtooth (@dallasgoldtooth) August 20, 2019


The most compelling candidate, however, was the Dine', Mark Charles.

Charles was on Democracy Now! yesterday; here's the video and transcript of that.  I certainly hope he can qualify for the ballot in Texas.  Today I would say that Charles would be my first alternate vote behind Bernie.  Given what I have recently learned about Howie Hawkins being a Russiagater, I've gone cold on his candidacy.  Speaking of, Hawkins will be in Texas -- Dallas and Houston -- right after Labor Day, according to David Collins.

-- Andrew Yang has names for his pectoral muscles.   No, I'm not going to tell you.  You'll have to click over.  This is disqualifying even without considering the rest of this guy's weird shit.

-- Tulsi Gabbard might not make the next debate because of the DNC's machinations of what constitutes a 'qualifying poll'.

Take, for instance, her poll standing in New Hampshire, which currently places Gabbard at 3.3% support, according to the RealClearPolitics average as of Aug. 20. One might suspect that such a figure would merit inclusion in the upcoming debates -- especially considering she’s ahead of several candidates who have already been granted entry, including Cory Booker, Amy Klobuchar, Beto O’Rourke, and Andrew Yang. But the Democratic National Committee has decreed that the polls constituting this average are not sufficiently “qualifying.”

They simply would not be the DNC if they weren't fucking somebody over.

-- As previously reported, Lincoln Chafee is interested in the Libertarian nomination.  Not running for it, just "open to it", like a draft or something.

-- Something more about Biden.

-- I suppose I should post something about Warren also.

Seeing double? It's not you -- it's Stephanie Oyen, an Elizabeth Warren doppelganger from Edina at the presidential candidate's rally in St. Paul last night. https://t.co/RMU5ka2Wpu
— Star Tribune (@StarTribune) August 20, 2019

Oh yeah, this too.

-- I'd rather not post anything about Beto or Booker or Kamala or any of the others if it's all the same to you.  Go read Kos' cattle call if you like; he's got the Cali junior senator in fourth now.

-- Joe Walsh is deemed likely to challenge Trump in the GOP primary.

In 5 days, Bernie has released the 3 strongest plans to:


...how we pick our president
“presidential electors who cast the actual ballots for president and vice president are free to vote as they wish and cannot be required to follow the results of the popular vote in their states.”