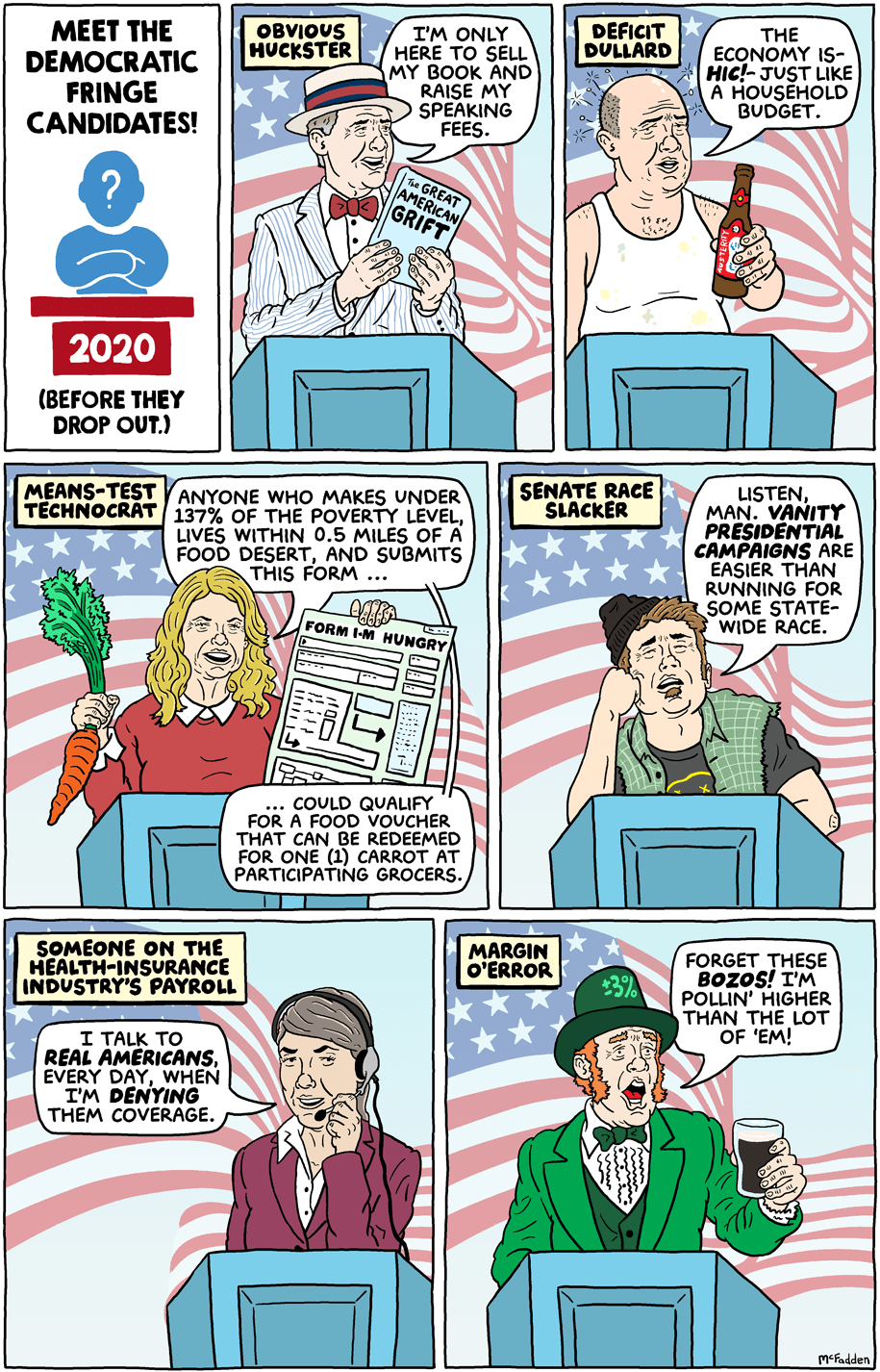 Entrepreneur Andrew Yang is the ninth Democrat to qualify for September's next presidential primary debates.

Yang crossed the threshold on Thursday after a Monmouth poll in Iowa put him at 2% support. He had previously hit the donor requirements of 130,000 unique donors from 20 different states. His campaign had said he qualified outright based on an earlier poll, but the Democratic National Committee said it wouldn't count that poll.

The other eight are Biden, Booker, Buttigieg, Harris, Klobuchar, O'Rourke, Sanders, and Warren.  Those that have cleared the donor threshold are Castro and Gabbard.  Steyer has the polling but not the contributor numbers.  None of the others -- and they're all shown here; this is a great resource, bookmark it -- have met either the poll or the donor requirement yet.

Castro is closest to being tenth on the Houston stage as of this posting.  If Gabbard or Steyer qualify, they'll make eleven and/or twelve debaters ... and the field will be split for September 12 and 13.

(The contestants ought to be broken up over two evenings even if there are just ten IMO, but there is probably a cost consideration for everyone involved.)

-- Enten/Cillizza at CNN's weekly ranking has them in what is now a familiar order: Biden, Warren, Harris, Sanders, Buttigieg the top five.  Bernie is ahead of Kamala on my scorecard, but whatever.  This caught my notice.

We aren't convinced that Sanders will be able to put together a coalition to win the primary. Sanders' chances go up, however, if this turns into a contest in which caucus and primary winners are taking a low percentage of the vote. The reason is that Vermont's junior senator seems to have a solid base of about 15%. One way you can see that is Sanders' voters are far more likely than others to say that issues matter more than electability.

That's more Enten than Cillizza, FWIW.  I laugh at loud at statisticians ignoring the obvious:

Sanders' support is under-reported and under-measured, as with Castro.  I would not expect Julián to do well in Iowa or New Hampshire but at this rate he is going to stun some corporate media types on Super Tuesday (Nevada, California, Texas).

-- Speaking of the Hawkeyes, there will be lots of pictures of candidates fellating corndogs at the state fair this weekend.  Goofy Joe is already choking on a corncob.

Ol’ massa Joe Biden had a little slip of the tongue in Iowa.
He slipped up and said:

"Poor kids are just as bright and just as talented as white kids."

He then immediately tried to clean it up


Context: “We have this notion that somehow if you’re poor, you cannot do it. Poor kids are just as bright, just as talented, as white kids." Biden quickly added, "Wealthy kids, black kids, Asian kids, no I really mean it, but think how we think about it.” https://t.co/ymj5z5lKB0
— Jamil Smith (@JamilSmith) August 9, 2019


The blunder came just hours after the 2020 hopeful confused voters by saying "we choose truth over facts" in a separate speech. https://t.co/dn5FhIQ8cf
— HuffPost (@HuffPost) August 9, 2019


As I blogged after the second debate, there's still plenty of time for his supporters to wake TF up.  If for no other reason than to make the motherfucker earn the nomination and not just be crowned in an "inevitable" consent decree issued from the corporate media, like Hillary.

-- Back to future debates for a moment. 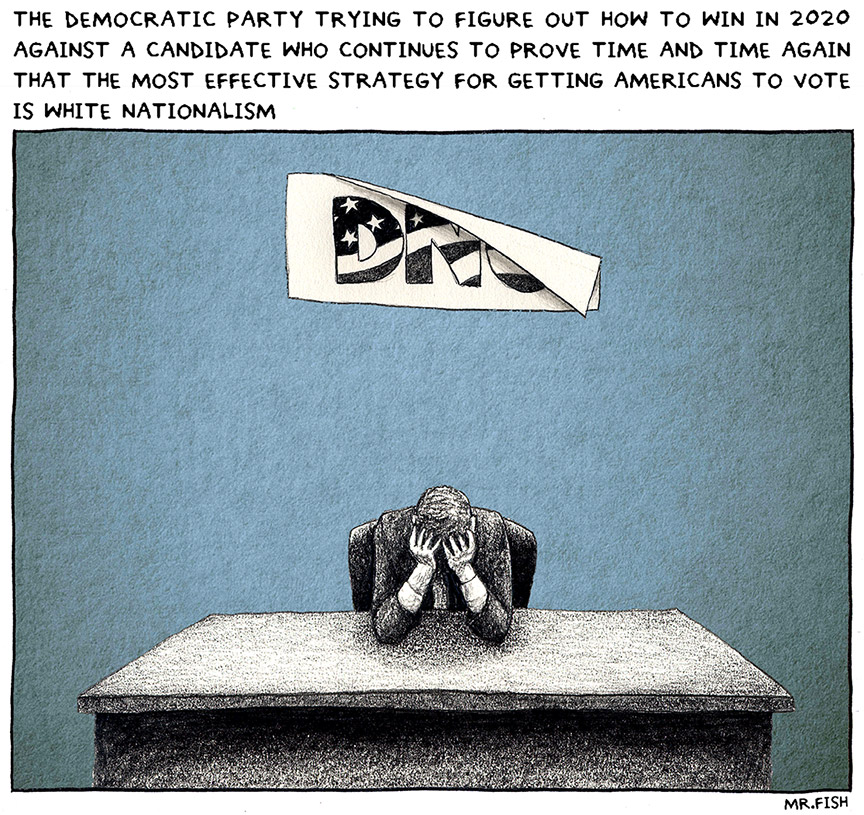 Democratic presidential hopefuls at risk of being elbowed out by the debate rules may have gotten a last-minute reprieve.

The deadline to qualify for the September debate is August 28, just a little over three weeks away. To reach the stage, candidates have to poll at 2 percent in four Democratic National Committee-approved surveys and have 130,000 unique donors. That’s a bar the majority of the field has not hit and isn’t on track to do so.

But a DNC memo sent to all the campaigns on Monday essentially gives those candidates who miss the September debate more time to qualify for the October debate, which could very well feature more candidates, not fewer.

Bold and italic emphasis in the excerpt is mine.  The DNC hasn't even scheduled the fourth debate yet, so to call this speculative understates it.  Something to keep in mind, however, especially considering all those proposed climate town halls next month (first reported in the 7/26 Update and which apparently dodge the DNC penalty for participating in unsanctioned "debates").  Recall that Mike Gravel -- who dropped out this week and endorsed both Bernie and Tulsi -- said he would sponsor a debate around this time -- between the second and third debates -- as well.  So it's possible that a) he's not going to do that after all, and b) this move by the DNC is designed to short-circuit that effort anyway.

There will also be a forum in Iowa later this month dedicated to the concerns of the First North American People.

So far, five of the 24 official candidates vying for the Democratic nomination have confirmed they will participate in a forum devoted entirely to indigenous peoples’ concerns on August 19 and 20 in Sioux City, Iowa. The conversation will include four familiar faces for those who watched the first Democratic National Committee debate: Vermont Senator and 2016 almost-nominee Bernie Sanders, author and meme fodder Marianne Williamson, Obama-era Housing and Urban Development Secretary Julián “Do Your Homework” Castro, and former Maryland Congressman John Delaney. They will also be joined by Montana Governor Steve Bullock, a Democratic candidate who did not meet the qualifications for the first Democratic National Committee debate, and Independent candidate Mark Charles, a member of the Navajo Nation.

Way back here, I posted Charles' campaign video.  It's worth watching if you haven't.  A few more quick hits:

-- Buttigieg is already courting superdelegates in case there is a brokered convention next summer.  What have I written about this guy playing king- or queen-maker?

-- Warren is bulking up in Nevada.  de Blasio needs to go ahead and join Gravel on the sidelines, endorsing Bernie on his way out the door.

-- Williamson and Gabbard elicit the most unhinged, foaming-at-the-mouth responses from the Democratic establishment, and from one or two obsessive/compulsives far away from it, too.  Both women plus Yang have factions of support for their views that are -- putting it kindly -- well outside the mainstream of conventional politics.  Candidly I find all three entertaining at minimum, and would vote for any one of them over shitheels like Biden, Delaney, Ryan, Bullock, Hickenlooper, Bennet, or Moulton.  "tHATZ hOW wE gOT tRUMP", the centrists will bray.