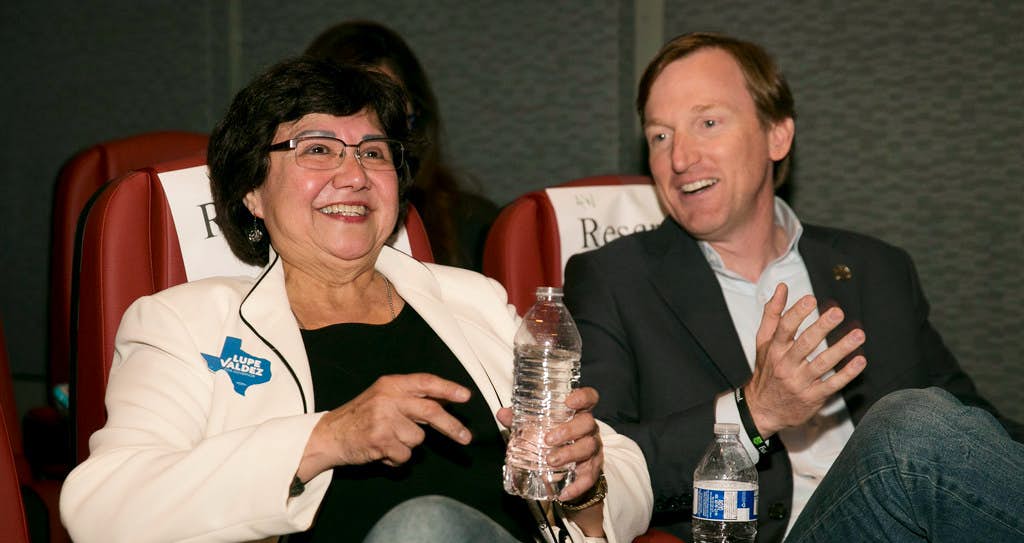 In an election year when no Democrat with statewide name identification stepped up to run, Valdez looked like an ideal party candidate—on paper at least. She had an impoverished childhood and made something of herself by attending college and obtaining a master’s degree in criminology. She rose to the rank of captain in the U.S. Army before starting a career with the U.S. Customs and Border Protection, then winning election as Dallas County sheriff in 2004 by defeating a Republican. She is also in a same-sex relationship.

A Hispanic gay woman in law enforcement who had proven herself in elective politics, Valdez seemed to have it all going for her. [...] everything except a knowledge of state government and seemed to lack a willingness to learn. Andrew White, a Houston investor and the son of a former governor, looked like he represented the Democratic Party of yore, not the new multicultural party. He finished a distant second in the primary voting, but then Valdez started stumbling. The party faithful began a debate over whether it is better to support a candidate like Valdez, who represents the party base, or a candidate like White, who might actually have a chance of defeating Abbott.


Let's set RG's record straight on a couple of things.

-- White has no chance of defeating Abbott.  None whatsoever.  Neither does Valdez, but she'll come closer than White in losing, and she helps the downballot by motivating the Latin@ vote.  White discourages D turnout over all.

We've been down this road before; with Wendy Davis four years ago, with another conservative Democrat named White before that, with a fake progressive named Chris Bell before that, and even with a wealthy Latino before that.  The blue share of the electorate has only gone in one direction over the past twenty years in midterm election cycles.  But hey, some Donkeys haven't figured out that's not working, so they're all in for Andrew.  I'm taking a hard pass, thanks.

-- That link above to the Facebook quarreling is full of the kind of Texas Democrats I have left in my rear view mirror, in both the TDP and the TPA.  Several of them used to blog but don't any more (rationales include 'blogging was so 2006' or '08 or so, among others).  The discussion, FWIW, centers around the contrasts between Lupe's competence and ability to turn out the vote versus White's, and which is more important in 2018.  As you have perhaps figured out, his competence compared to hers -- when neither stands a chance anyway -- is a non-starter for me.

This is not a debate between major contenders, though. (As of the last reporting period, Valdez had $57,000 in the bank; White, $1 million; and Abbott, $41 million.) Texas Democrats have the longest partisan losing streak in statewide elections of any party in the nation. With tens of millions of dollars at his disposal, Abbott has little to worry about from either White or Valdez, but if Valdez does not improve, if she does not study the statewide issues, if she continues to stumble, she could lead the party’s down-ballot candidates into defeat with her.


Yeah, no amount of money on God's green Earth, Hell's half-acre, or the dry, parched ground out in Doss, where Mike and Mary Porter raise cattle, is going to knock Abbott out of his wheelchair off his high horse this year.  Good Christian folk like the Porters will see to it.

My option in November (I've said it before, but I guess Gadfly didn't hear it) is Janis Richards, if she gets on the ballot.  Anybody got a status update on the Texas Greens' ballot signature petitions?  If my counting is accurate, 75 days from March 13 leaves us at Memorial Day weekend, about two weeks away, depending on how holidays are counted.  The GPTX needs slightly over 47,000 signatures from registered voters who didn't cast a ballot in either primary nor participate in the Libertarians' nominating convention process.  I don't see any recent updates to the party's website or Twitter feed with respect to an update, a request for help gathering sigs, or much of anything else.  And I don't do Facebook any longer.  If there's news there, or anywhere else for that matter, someone post it in the comments.

If Richards -- or an independent or party-affiliated progressive option -- is not on the November ballot, I'll probably be forced to undervote the race.  But I might be persuaded to vote for Valdez if she can acquit herself well tonight and going forward.  I still think she'll be the nominee regardless, mostly because the more I read of White, the lousier he seems.

Update: Tonight's debate is viewable live only in the San Antonio and Austin markets.  If you live in H-Town or elsewhere, you can livestream it via KXAN at this link.
Posted by PDiddie at Friday, May 11, 2018

Ahh, but I did hear about it, even if i didn't mention (J)an Richards by name. At the bottom of what you linked:

"Now, a Socialist Party USA write-in? Or a Green-affiliated one if the party isn't on the ballot?"

Right above that, you said I "was silent" on the question. I'm not finding your posts all that coherent lately, brother.

I was speaking about your silence IF Valdez, not White gets the nomination, and there's no Green party ballot access. I looked again at your previous post, and still don't see anything.

I"ll presumably undervote either White or Valdez without a Green line, myself.

Janis has informed me that she has filed to be an official write-in candidate. She's my choice for governor even if the Greens aren't on the ballot.

In related news, the Texas Greens will not regain their ballot line this year.