The following arrived in my inbox last Monday morning, from TSU professor, attorney, past Houston and Harris County elected official and several-times political candidate Carroll G. Robinson, under the header "Black to Blue in Texas 2".

If Democrats are going to turn Texas Blue in November, they will need strong Black voter turnout and right now there is nothing driving that turnout. 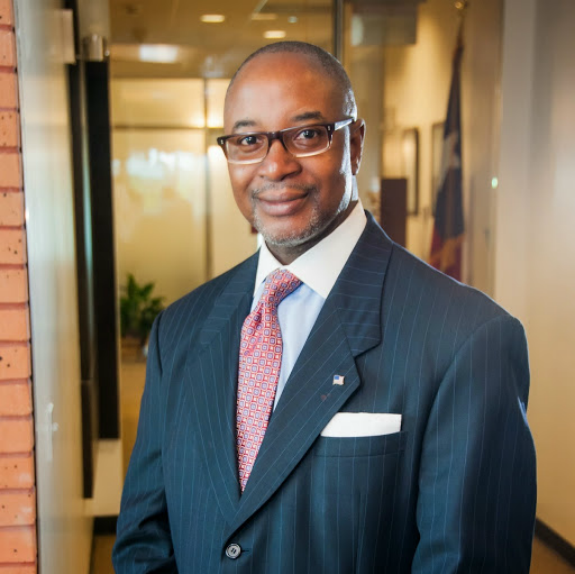 During the March Democratic Primary and May Run-Off, no statewide Democratic candidate invested significant financial resources with Black media - Radio,Newspapers, or cable stations such as BET, OWN or TV ONE - to introduce themselves and share their policy positions and commitments with Black Texans. That was a mistake.

Statewide Democratic candidates need to start introducing themselves broadly to the Black community now. Waiting until the Fall is going to be too late. There is just not enough time between Labor Day and the start of Early Voting, by mail and in person, to have voters get to know a candidate and their policy positions, especially when the candidates are being attacked in negative ads on TV, radio, in the mail and by auto-calls and emails.

For Democratic candidates, reaching out to Black voters now and caring about the issues of importance to the Black community across Texas is not pandering; it's the right thing to do. It leads to good public policy and it's good politics.

Black voters, like many other voters, are going to need more than just being against Trump to turnout in record numbers in November.

Beto and all the Democratic candidates for Congress should do a group 60 second TV commercial built on the message that electing a Texas Democratic Congressional Delegation would be electing candidates that look like and represent the interests, issues and concerns of all of us in Texas.

Black voters must know that their issues and concerns are being addressed and that they, their communities and the candidates of their choice are being "respected, included and invested in."

The Texas Democratic Party slogan for 2018 and moving forward should be "Making Texas Better...for All


This, as regular readers know, has been an occasional topic mentioned in this space (most recently at the bottom of this post), so while I can't call myself a fan of Robinson's, he's making a very important point that Lone Star Donkeys had better hear as they move toward their state convention, in Fort Worth in late June, and on to November.

I'm thinking Robinson's 'demand letter' styling above isn't going to be met with a receptive audience, but even if the wrong messenger is communicating the right message too aggressively ... the threat of black Democrats sitting out another election is not too cool to contemplate.

[I could write a long and separate post about what it would take for Democrats to re-energize black turnout.  After all, they saved Alabama for Doug Jones.  But Jones has already bitten the hands of those who cast their ballots for him, a warning that the sage of hoops, Charles Barkley, issued on the night Jones won.  More recently, when Chance the Rapper responded to Kanye West's coming-out as as a Trumpet, Chance's point was clarified by Brianha Joy Gray at Rolling Stone (recently named political editor at "something called" The Intercept).  Her piece is worth the full read.

There is ... a significant group of unreservedly enthusiastic supporters for a third party challenge. To those disillusioned by both sides, it's clear that the long-term benefits of breaking up the two-party system outweigh the short-term harms of a spoiler election: Even if a third-party were to split the vote, the loss would force the Democratic Party to pay attention to the needs of all its voters.

While this argument can, at times, bear the mark of privilege, its critics tend to forget the visceral human consequences of "incrementalism" – the gradual change traditionally advocated by establishment figures – even as they rightly fear the potential havoc of conservative leadership. The "fierce urgency of now" that motivates third-party advocates, those undeterred by the possibility of spoilers, is not merely about privilege – it's also the call of the institutionally ignored.

Clarifying his earlier tweets, Chance The Rapper, who made headlines last year for donating $2 million to Chicago public schools, explained today that his frustration with Democrats stemmed from the party’s lack of investment in his hometown: "My statement about black folk not having to be democrats (though true) was a deflection from the real conversation and stemmed from a personal issue with the fact that Chicago has had generations of democratic officials with no investment or regard for black schools, neighborhood[s] or black lives." After apologizing for the timing of his remarks, he went on to argue that "[w]e have to talk honestly about what is happening and has been happening in this country and we have to challenge those who are responsible, as well as those who are giving them a pass."


Yeah, her article is actually about Ranked Choice Voting.  It's a real thing.  This is officially a digression now, so let's return to where we began; Carroll Robinson's letter and his caution to Texas Dems: stop taking black votes for granted.]

And then yesterday morning, again via email, 2018 gubernatorial candidate Cedric Davis Jr. announced his challenge to Gilberto Hinojosa for the TDP chairmanship.  Here's the entire message he sent, introducing himself again (the audience is delegates to the party's convention). 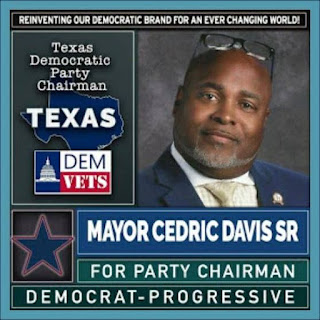 The Democratic Blue Wave is sweeping across many states in our nation. I am excited to be a part of this energetic historical movement by the people to make government and party officials more responsive to needs and concerns of the people. After finishing third in the 2018 Democratic Gubernatorial Primaries, the level of energy of those looking to transform our state and nation to people-oriented governments is unmatched! That is why tens of thousands of Democrats around Texas has personally challenged and encouraged me to seek the chairmanship of our party. After considering the people’s challenge to me after the March primaries, I filed to run for Chair of the Texas Democratic Party. I am running to continue being a viable voice for those who have been disenfranchised, to continue bringing forth inspirational messaging, fight the Republican Leadership with new aggressive progressive strategies and tactics, and to ensure the Democratic Blue Wave finds its way to Texas!

I am a proud native of North Texas who is the father of five, a Desert Storm Veteran, an alumnus of Sam Houston University (B.Sc. CRIJ), and Tarleton State University (Graduate Studies in Public Administration). I am a Master Peace Officer, Police Instructor, and Investigator. I have served the public in a public safety and security role for more than 30 years. I currently teach pre-law, criminal justice, and law enforcement to the students of Garland ISD.

I have over three decades of political activism and community involvement experience as a North Texas political and community figure. I enjoy motivating individuals to be active on municipal, and state boards and commissions which also includes encouraging individuals to run for local and state offices. During the past three decades, I have had the pleasure of advising, managing, and assisting in fundraising for campaigns on the local and state level. I am proud to have served as Mayor of Balch Springs, Texas. As your Chair, I will work to help find a Chairperson for every County of Texas and find additional funding sources to support Chairs of rural areas with newer communication technologies such as current web-pages and universal Wi-Fi so our democratic messaging reaches the entire state.

As a former Mayor, Police Chief, School Board Trustee, and EDC Board of Director and many other community Boards and Commissions have made me viable and battle-tested in the importance of diversity in governance, education, and the workforce within our state and country. During our 2018 campaign travels around the state, we found many communities were more accepting to my presentation of new strategies and ideologies that would empower more Democrats into political offices, that would support current and new community and social programs, add job creation, encourage new voting blocks to become Democrats. Our message was embraced more often than none because I possessed the experience of being on the ground long before I ran for governor; that’s what mattered to the people. My public service leadership record of having a “Real Soldier” mentality when fighting for people and their community’s tower above the other candidates. I have been able to organize, moderate, and speak on issues of social justice and political empowerment with little to no resources. I plan to use my extensive experience to help our party unify our base of voters and energize new blocks of voters to elect Democrats across the state!

These are a few reasons why I believe African Americans, Whites, Latinos, Asians, Muslims, Women, Veterans, Teachers, and others of the poor and middle class have continued to support me in bringing their message forward. Because people prefer responsiveness and transparency over political games, I would be honored to have your vote at the 2018 State Convention. I look forward to talking to you soon!


Now Davis is somebody I do like, and not just because he's running against the worst TDP chair in a long list of bad ones.  This blog's second most-clicked post, with more than 13,000 hits, is about El Patron and his South Texas (alleged) corruption.

I would imagine some collection of Hinojosa stooges, perhaps including Puss in Boots Horwitz, is whipping the number of brown and black delegates to the June convention.  You can count two Caucasians from SD-13 in Davis' column.

Whether Davis prevails over Hinojosa or not, Democrats (not just in Texas, mind you) had better be paying attention to the message they're being sent.  It ain't just black voters -- though this caucus is the most critical to their 2018 blue wave hopes -- and it damn sure ain't "Not Trump".
Posted by PDiddie at Wednesday, May 09, 2018

Had to give you a link after skipping you in the Wrangle. Fits to a tea, I see?

I'm sure the Houston Chronicle dearly misses both of your referrals.

Can we have somebody whipping Hinojosa, speaking of the spot of the Noah call-out?

Out of their three million daily hits? I kinda think not. On the other hand, you shouldn't let anybody's disrespect bruise your fragile ego, Puss. You'll be a big boy some day, all growed up, and I'm just glad I won't be around to see it.