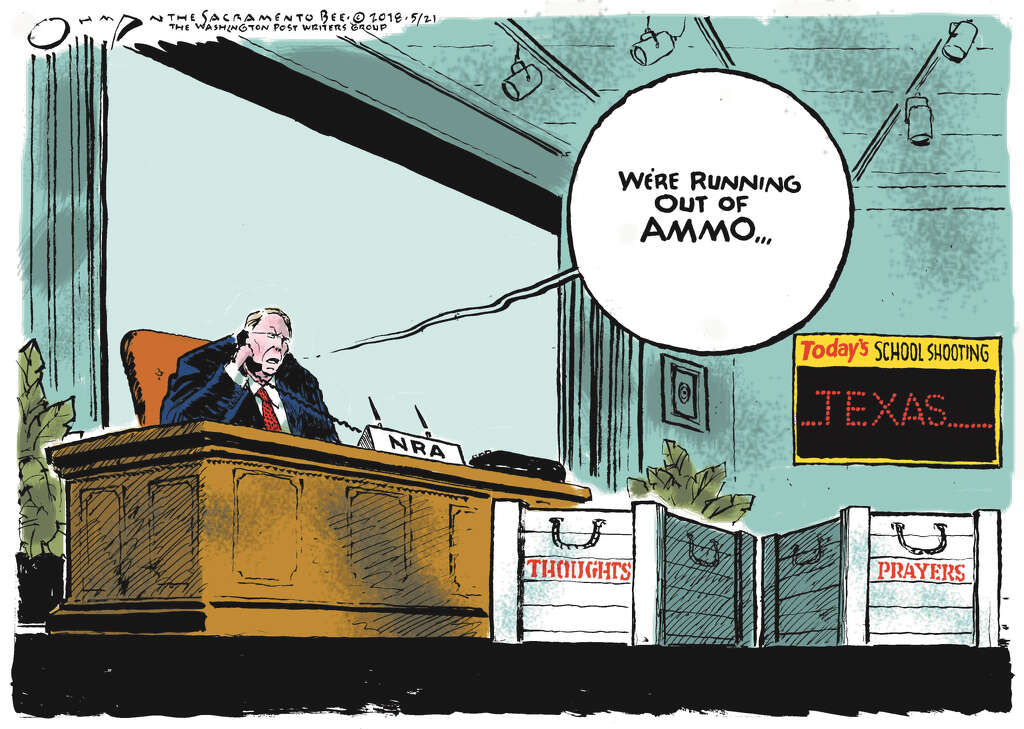 The Texas Progressive Alliance weeps for the families of the Santa Fe victims, the latest in America's ongoing carnage of gun violence and the predictable aftermath of excuse-making and inaction by our bought-and-paid-for lawmakers.

Everything is bigger in Texas, and Dan Patrick broke records for his creative ignorance, first blaming school exit doors, and later video games and even women's reproductive choice.  He also referred to something called a "well-run militia", which appears nowhere in the Constitution.  Brand-new NRA president Oliver North fingered Ritalin as the culprit.

(Odd that cowardice and white privilege weren't mentioned to any prominent degree.  The killer's parents -- you might have read he used his father's guns -- remain in deep denial.)

Greg Abbott claimed he might do something, and was challenged to do so, but his response so far has been long on thoughts and prayers and short on action.  HPD chief Art Acevedo got 15 minutes of social media fame by having his Facebook post picked up by the NYT.  State Rep. Gene Wu Tweeted "y'all" a couple of times in solidarity.

And it's almost time for the cycle to start anew.

A few bloggers and news sources weighed in: Somervell County Salon has Jimmy Kimmel's reaction.  Socratic Gadfly called out Abbott for both his usual hypocrisy and his egotism after the killings.  And Casey Fleming does not want to have to write about school shootings ever again.   (Good luck with that, buddy.)

Last but most importantly, No More Mister Nice Blog eviscerates the New York Times for perpetuating the myth that Texans love their guns.

All of this may be true, and the story goes on for sixteen more paragraphs in this fashion. But then we're told:

Polling shows the state’s voters are more split on guns than popular culture might indicate. According to an October poll by the University of Texas and The Texas Tribune, more than half of the registered voters surveyed said gun control laws should be stricter. Only 13 percent said the laws should be less strict than they are now, and 31 percent would prefer to leave current gun laws unchanged.

My response is: So it's not "popular culture" that's misinforming us about Texans' attitudes regard gun laws -- it's you, New York Times. It's you saying that "guns are hard-wired into the state’s psyche" and quoting (as the story goes on to do) primarily Republican politicians and residents of this rural community. (Texas isn't a rural state -- it has four of the eleven most populous cities in America. City dwellers are Americans, too -- and city dwellers in Texas are Texans.)

I wish this story had examined the disjuncture between the widespread support for at least some tightening of gun laws and the political impossibility of tightening in many parts of America. In Texas, it's not because keeping the gun laws loose is the will of the state's residents -- the poll numbers make that clear -- but because the minority that resists change is dominant. The story could have made clearer that that's what's going on, rather than implying that love of unrestricted guns is essential to the entire state's culture and we liberals just don't understand.


This week's Wrangle contains some election news ahead of tomorrow's vote, and some lighter reading posted before Friday's tragedy.

Wait, didn’t Texas already hold its primaries? Well, yes, but more than 30 contests needed to go into overtime because no candidate received 50 percent of the vote. Those runoffs, between the top two finishers from March 6, take place Tuesday.

In the final days of the Democratic primary for Texas’s 7th Congressional District, the Democratic Congressional Campaign Committee ignited a controversy by releasing opposition research against one of its own candidates, progressive activist Laura Moser. Intended to show Democrats that Moser would go down to certain defeat against Rep. John Culberson in the general election, the smear may instead have rallied anti-establishment voters to Moser’s side, and she finished second in the primary to attorney Lizzie Pannill Fletcher (29 percent to 24 percent).

The runoff has been a relatively drama-free affair, but those battle lines remain drawn, as FiveThirtyEight’s Clare Malone and Galen Druke discussed in a special podcast episode last week. The Fletcher-Moser race actually bears more than a passing resemblance to last week’s Democratic primary in Nebraska’s 2nd District: The two candidates agree on all issues except single-payer health care, but Moser speaks with the defiant tone of the #Resistance, while Fletcher is trying to appeal to both sides of the aisle. In Nebraska, the progressive eked out an upset win; if Moser does the same, it could deal a similar blow4 to Democrats’ chances of picking up a reddish-purple seat (in this case, R+7). In the big picture, a Moser win would suggest strong anti-establishment sentiment among Democratic voters, and the DCCC would surely think twice about intervening in a similar way in a future primary.

Texas’s 21st District is 16 points more Republican-leaning than the nation as a whole, but with the retirement of Rep. Lamar Smith, Democrats may have an opening. Both parties have runoffs in this open seat. For Democrats, Mary Street Wilson edged Joseph Kopser, 31 percent to 29 percent, in the first round, but Kopser, an Army veteran and tech entrepreneur, would be the party’s stronger candidate in a general election. Unlike Wilson (who has pulled in less than $100,000 all cycle), Kopser has proved that he can raise funds. For the GOP, former Ted Cruz chief of staff Chip Roy (27 percent in the first round) faces off with perennial candidate Matt McCall (17 percent). Bet on Roy, whose campaign has been backed by $584,000 in TV and mail ads from the Club for Growth.

Texas’s 23rd District is the state’s most evenly matched district between Democrats and Republicans (it has an R+1 partisan lean), but it’s also the one with the least competitive primary. Gina Ortiz Jones, a gay Air Force veteran, is looking to become the first Filipina-American congresswoman. Before she can take on incumbent Republican Will Hurd, however, she will need to defeat Rick Treviño, a progressive teacher in the mold of Bernie Sanders, in the Democratic runoff. It should be an easy task: Ortiz Jones has outraised Treviño $1.2 million to $49,000, and having beaten him 41 percent to 17 percent in the first round, she doesn’t need to pick up much more support to get to a majority.

It’s a similar story in Texas’s final competitive House race, the 32nd District (R+5), in the fight to take on Rep. Pete Sessions. Former NFL player Colin Allred led the Democratic primary in March with 38 percent to businesswoman Lillian Salerno’s 18 percent, and the DCCC responded by adding him to its “Red to Blue” program. Salerno does, at least, have the cash ($666,000 raised) to make it a real race, and the Emily’s List endorsee may benefit from a year when female candidates seem to be doing well.

Finally, Democrats’ choice for governor could set the tone for Democratic campaigns statewide. Lupe Valdez, the gay Latina former sheriff of Dallas County, excites progressives with her diversity and is favored by those who believe motivating Latino voters is Texas Democrats’ recipe for success. Having received 43 percent of the vote in March, she’s the favorite in the runoff against self-described “very conservative Democrat” Andrew White. White, the son of former Gov. Mark White, has had more funds at his disposal thanks to a $1 million loan he made to his own campaign. Like in Georgia, it’s debatable whose strategy truly gives Democrats the best path in the general election. Although it could have coattail effects on down-ballot races, it’s probably academic for this one; neither Valdez nor White is given much of a chance against incumbent Gov. Greg Abbott.


jobsanger charted the EV numbers in the D runoff from the state's thirty largest counties, and Kuff looked at the potential for online voter registration in Texas in the wake of the "motor voter" lawsuit.

Texas Freedom Network hears demagogue David Barton make a misleading case for politicizing houses of worship, while Gus Bova at the Texas Observer introduces Farris Wilks, the Texas GOP kingmaker.  (Wilks, a fracking billionaire, is an elder at a church that does not allow women to speak during church services.)

Grits for Breakfast points to a Dallas Morning News piece in asserting the state is still using junk science like 'forensic hypnosis' in death penalty cases.

Zachery Taylor notes the feudal system incarnate in our corporate media and questions their incessant coverage of crooks and thugs.

Texas Vox visited the Bayou City and met with the Healthy Port Communities Coalition while touring the Manchester neighborhood and areas around Pasadena's refineries and the Port of Houston.

Bonddad has an interest rate and gas price watch posted.

Texas Public Radio's storyteller from Brownsville, Dr. W. F. Strong, is profiled by Mike McGuff and can be heard on Texas Standard-affiliated stations.

And nonsequiteuse believes there's only one way we can bring about real change going forward.
Posted by PDiddie at Monday, May 21, 2018