Woo hoo moderates and centrists.  Clap for the conservaDems (and for that matter, the same standing-in-the-middle-of-the-road armadillos in the TXGOP.)  Dilly "pragmatists".

(Laura Moser) spent a recent Saturday walking from door to door in the Houston suburb of Cypress, trying to convince voters who rarely come out to the polls in Texas’s Seventh District to support her progressive agenda in the Democratic primary runoff Tuesday.

These are the voters Texas Democrats want to see turn out in droves during the 2018 midterms. But in past years, they haven’t had a lot of success convincing them.

“You’re the most powerful voting bloc in the country,” Moser told one skeptical resident. “If everyone voted, you would get people representing you who looked like you.”


Moser was being complimentary; it's simply not accurate to call non-voters a voting bloc.

Houston is Moser’s hometown, and like the rest of the state, it has diversified since she grew up here. Many people working on their lawns or sitting outside in Cypress spoke Spanish, and a group of Latino and African-American children raced their bikes up and down the cul-de-sac.

Several neighborhood residents told Moser they don’t often see candidates for Congress knocking on doors as she encouraged them to get out and vote during the May 22 election.

This lines up with how Democrats have historically tried to win races in Texas — paying more attention to voters they know will turn out reliably. The Democratic Congressional Campaign Committee (DCCC) typically backs moderate candidates who they believe will appeal to independents and Democrats, and be more competitive against Republican incumbents.


How's that worked out for ya in the last twenty years, Donks?

The DCCC is following the same playbook this year, favoring Moser’s opponent in the runoff, Lizzie Pannill Fletcher. The DCCC hoped Moser wouldn’t make it this far, dropping an opposition research file on her ahead of the March primary — a decision that backfired and seems to have helped propel Moser into this week’s runoff this week. The organization has stopped short of explicitly backing Fletcher ahead of the runoff, but she’s clearly their preferred candidate.

Tuesday night (tested) which path appeals to Texas Democrats: Are they are still rooted in the center, or does their future lie in changing demographics and embracing a progressive ideology? More broadly, the TX-7 race has become emblematic of the conflict between the Democratic establishment and its newly emboldened progressive base, who wants to see the party swing left. 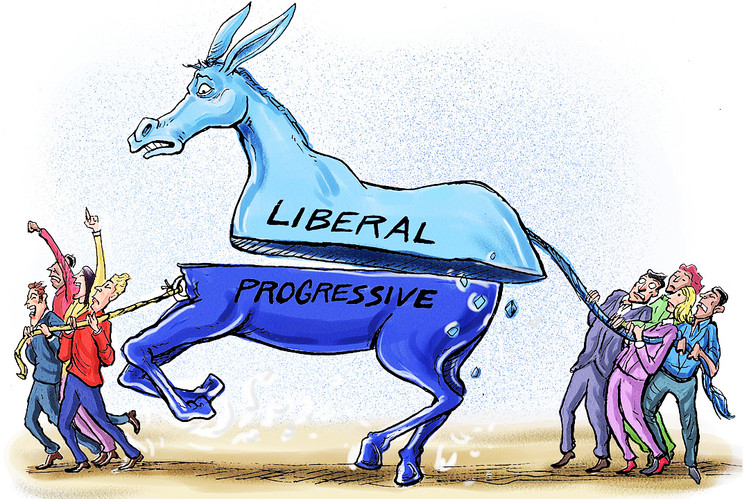 Expect a #DemExit again.  It's really not an even split as the toon suggests, but the prags do get the ass.  I like the red shirts on the left, too.

I'll have a lot more about last night later.
Posted by PDiddie at Wednesday, May 23, 2018

That Vox piece misses some historical context and leaves some inaccurate impressions, particularly of Cypress. I got a good chuckle from the use of the phrase "the neighborhood of Cypress."

Cypress is a large unincorporated area of Harris County with 175,000 people and 3 Starbucks locations. Yes, it has a growing LatinX population (22%, per the wiki), and the proportion of immigrant families from everywhere is substantial. However, even through its transition from rural to suburban, it has maintained its redneck vibe. The Mexican-Americans there with whom I went to school were part of that redneck vibe.

It's the kind of place where if you show up to vote in a Democratic Primary, everyone, including the precinct judges, stops mid-whatever and looks at you like you just arrived from outer space.

Good on Ms. Moser for trying, though.

A black or brown person showing up at these Election Day polling places in the exurbs is more than likely to have the cops -- or ICE -- summoned for no good reason. Just another little form of voter suppression. And everybody except the white people running the Harris County Democratic Party know it.

I'm a Neoliberal Shill, sayeth you and the other Bolsheviks, and I voted for Moser. I know a lot of folks far, far more liberal than me who voted for Fletcher. The race was not a re-litigation of the 2016 presidential primary that evidently broke your brain, but if it gives you validation for your perennial theatrics of taking your ball and going home in time for the autumn, I guess that's all good and well.

Looking forward to your Pop getting his ass blown out in November.

Cheering a right-wing judiciary to OWN THE LIBS!

Booing a loser and his kid with some expectation the NEOLIBS will learn to stop nominating their kindred pieces of shit. A long shot hope, but better than, say, Fletcher's chances against Culberson. Nothing to cheer about there.

Really, it makes me wonder why James Cargas wasn't nominated a fourth time.