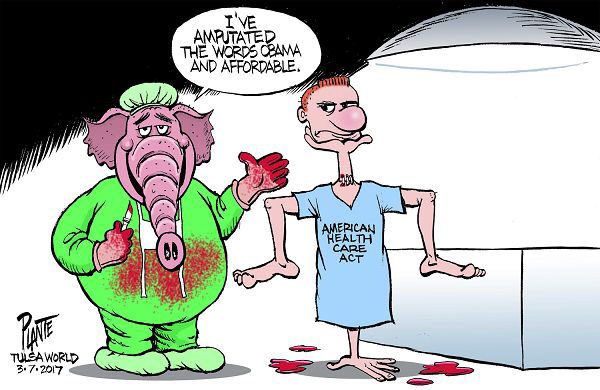 Like everything else President Twitler touches with his tiny hands, the American Health Care (sic) Act is doomed.  Terminal.  DOA.  Conductor Pence says get on board the train; right-wingers say, "where's the smoking car"?

“As the legislative process goes forward, the president and I believe that the American Health Care Act is the framework for reform,” (VP Mike) Pence said in the Capitol on Tuesday alongside the Senate Republican leadership. “We’re certainly open to improvements and to recommendations in the legislative process. But this is the bill, and the president supports the American Health Care Act.”

Conservatives have a different view of what the bill should be. To them, the American Health Care Act is 'Obamacare Lite', which repeals too little of the original and offers one too many new entitlements. Conservatives have the numbers to kill the bill—if they so choose. Will they?


At first intake, that would appear to be no.

The most vocal resistance, though, has been from conservatives: The Freedom Caucus in the House and the conservative triumvirate of Sens. Rand Paul, Mike Lee, and Ted Cruz in the Senate. Each of these blocs is large enough to deprive their party a majority vote in their respective chambers, and the cavalry of outside conservative groups -- Heritage Action, the Club for Growth, Americans for Prosperity (the Koch brothers), FreedomWorks -- have backed them up with swift expressions of disgust at the bill.

Those minds that see the American Health Care Act as Obamacare Lite believe that the federal government should have little, if any, role in spending dollars to provide poor and lower-income people with access to medical care. If your baseline is that the Medicaid expansion should be undone and what remains of Medicaid should be slashed and block granted off to the states, that no federal dollars should be spent to help lower-middle income individuals obtain health coverage, that few federal regulations should govern the financing of and delivery of health services, and that no taxes should exist, then sure, this proposal would come across as 'Obamacare Lite'.

The Freedom Caucus, along with Sens. Paul and Lee, held a press conference Tuesday afternoon outside the Capitol to explain that position. (Conspicuously absent was Cruz. It is worth keeping in mind that while the Texas senator has expressed similar misgivings with the bill, he is up for re-election in 2018 and cannot rule out a serious primary challenge from the establishment if he fails to mind his manners.) They portrayed the bill as “the leadership bill”—just one of several proposals floating around out there, any of which could be picked up. This view borders on denial.


With Poop Cruz's political problems duly noted, if Trumpcare suddenly gives Senate Republicans the courage to cut and run from Trump, I'm all in favor.  Let's encourage that.  Keep those calls and postcards going to your senators, Resistors.
Posted by PDiddie at Wednesday, March 08, 2017

Speaking of the last graf, do you think Dowd has much of a shot?

He says he'll run as an indy and not a Rethug, so I would have to say no. But if the November options were Beto and Cruz and Dowd, that might be the Dems' best chance to flip the seat. I'm not a Castro fan as you know.

But if McCaul jumps into the GOP primary and spends a wad, Ted might not make it to November.