Unlike the president and the Republican Congress, the Texas Progressive Alliance does NOT promise to repeal last week's roundup and replace it with something 'better' and 'cheaper' this week. 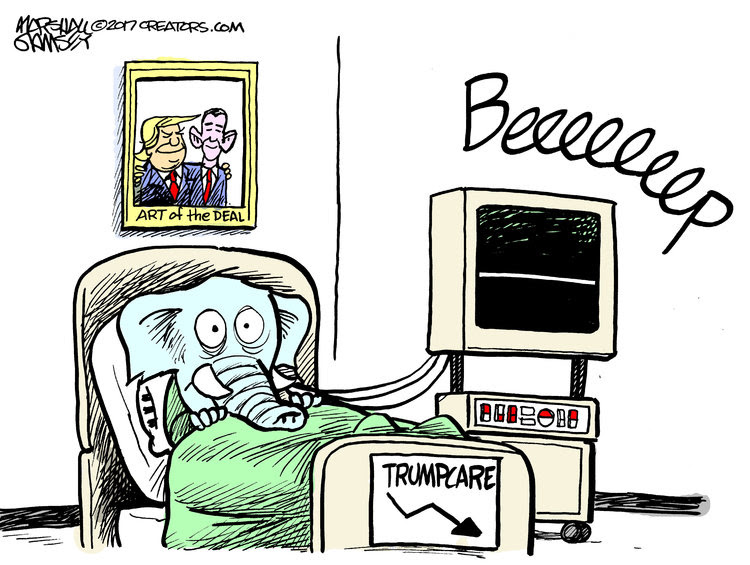 Off the Kuff identifies the top legislative districts to target in 2018.

Socratic Gadfly sees Greens and other left-liberals talking libertarian-style about getting rid of the Federal Reserve and offers them a reality check about it, with suggestions for proper reform, while noting its neededness.

CouldBeTrue of South Texas Chisme warns Texas Republicans on track to destroy local rule, another anti-democratic war on citizens and on voters.

It was another lousy week to be a Republican as Trumpcare went down in flames, the Russian problems flared up again, and the TXGOP started fighting with each other right out in the open. PDiddie at Brains and Eggs managed to cram all the action into one blog post, with some crow left over for the Democrats.

Neil at All People Have Value has four observations on the failure of Trumpcare.

Teddy Wilson at Rewire investigates the state's contract with the anti-abortion Heidi Group.

The Lewisville ISD superintendent testified in a federal civil trial that he did not believe a 14-year-old student was sexually assaulted, as she alleges, as reported by the Texan Journal.

Texas Leftist repeated the story told in the Texas Observer about one Texan's effort to bring living transgender into focus for members of the Texas Legislature.

Texas Vox has the bulletin regarding the public hearing on the toxic chemical emergency alert system, tomorrow at the Lege.

jobsanger took note of Politifact's report that millions of guns have been sold in the US without a background check.

More news and blog posts from across the Lone Star State!

Via the Houston Chronicle, Energy Secretary Rick Perry somehow found time in his busy schedule to weigh in on the Texas A&M student body presidential election.

The San Antonio Express News reports that plans for a fracking sand mine in Atascosa County -- near the site of one of the state's historic battlefields, and over the objections of residents -- are moving ahead.

Edinburg Politics reports on Rep. Terry Canales' bill in the Lege that would reform the practice of jailing Texans who cannot pay fines for petty offenses.

The Austin Monitor took pictures of the new MetroRail trains arriving (by tractor trailer) in the capital city, and Streetsblog highlights five good transportation bills in the Lege.

Save Buffalo Bayou sees the private organization in charge of Houston's Memorial Park still determined to make some wrong-headed decisions about the fate of the bayou.

Beyond Bones provides a road trip map from spring breaks of yore.

Juanita Jean gets in one last cackle over the Trumpcare debacle.