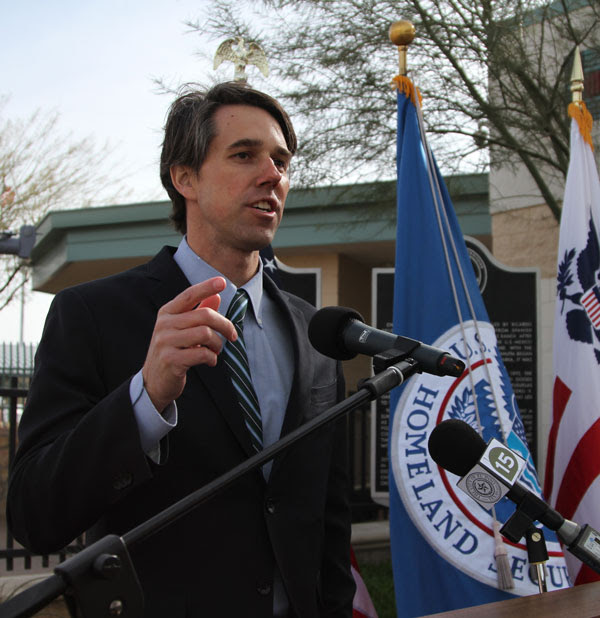 Or will be officially, tomorrow.  Jon Tilove at the Statesman:

U.S. Rep. Beto O’Rourke’s political operation has sent an email to supporters Wednesday promising a “big announcement” on Friday, an almost certain sign that the El Paso Democrat will be announcing his candidacy for the U.S. Senate seat held by Republican Ted Cruz.

“Beto’s been traveling across Texas for the past four months, meeting with people in communities big and small. The energy and passion he’s seen have been inspiring. Together, we can do something really big, and really powerful for the state of Texas — and for this country,” the email read. “Congressman Beto O’Rourke has a big announcement to make on Friday.”

U.S. Rep. Joaquin Castro, D-San Antonio, also has been considering entering the race and promised a decision by the end of April.

“It’s no secret that Joaquin is heavily weighing a Senate run, and he will continue to have those discussions with his family, friends and supporters across Texas,” Castro’s political director, Matthew Jones, said in a statement Wednesday. “He plans to make his decision in the coming weeks.”

If he entered the race, Castro would have distinct advantages in name ID and organization over O’Rourke. But he has been considered a less likely candidate. Both O’Rourke, 44, and Castro, 42, are in their third terms in the House. O’Rourke has promised not to serve more than four terms while Castro has a potentially longer, brighter future there. He serves on the House Intelligence Committee which is investigating potential Russia ties to the Trump campaign and Trump administration.


I wouldn't care for a contested primary (Democrats need less divisiveness, not more) and would rather Beto than Joaquin, as O'Rourke is somewhat to the left of Castro.  I say 'somewhat' because Justice Democrats, another organization trying to pull the Donkeys to the left, has a graphic that shows neither man has signed on to Bernie Sanders' Medicare for All bill, so there's an opportunity to take a stand for something that Hillary Clinton said would 'never, ever happen'.  I'm also no fan of the manner in which the twins perform this Hamlet-esque rumination over their political futures -- or perhaps more accurately, the way they allow and encourage reporters and bloggers and supporters and opponents to do so.  It's a little annoying.  Be that as it may ...

O’Rourke, little known outside his district, would be a long shot in a state that remains reliably Republican. But the Trump presidency adds an element of uncertainty to political calculations everywhere in 2018, and O’Rourke’s recent bipartisan road trip with U.S. Rep. Will Hurd, R-Helotes, demonstrated a talent for winning positive notice and using social media to engage a large audience.

O’Rourke, a fluent Spanish speaker who lives on the border and says that it is the safest and best place to be, would offer a stark contrast to the politics of Cruz and Trump.


The key to victory for O'Rourke -- and not Castro -- won't be the money but the enthusiasm he is able to generate.  That, and Matt Dowd running.  Notable among his otherwise cipher-like qualities, Dowd predicted in September of 2015 that Trump would be the GOP nominee, which was a couple of months after Michael Moore did so, but was certainly a narrow limb to be perched on at that point in the 2016 cycle.  Now he wants to bid for the Senate as an indy, and that will IMO take more votes from Poop Cruz than it will either Democrat.  There is an Evan McMullin quality to Dowd that represents his greatest threat to the status quo today, and by virtue of the outcome of extremist conservative developments like the bathroom bill in the Lege, he may be able to parlay a chunk of unmeasurable anti-Trump/anti-Dan Patrick sentiment into something significant enough to tip the scales in a general election.  It would have to be at least ten percent of the vote, probably higher.

Debates between Dowd and O'Rourke would definitely not be at lowest-common-denominator intelligence level, and whether I'm right or wrong about the participants -- after all, Michael McCaul could still primary Cruz and defeat him -- a three-way race makes for some fun in 2018.

Gadfly has a good take and so does Kuff.
Posted by PDiddie at Thursday, March 30, 2017

Thanks for the link, and I'll link back. I've added your notes about both O'Rourke and Castro not co-sponsoring Conyers. And, you've seen what I think about Dowd — but neither O'Rourke nor Castro has a chance of winning unless Dowd is in the race, IMO.

If Dowd does not jump in, it's hard to see anything but another 60-40 win for Cruz (or McCaul).