Rick Casey looks behind the scenes of the Texas redistricting ruling 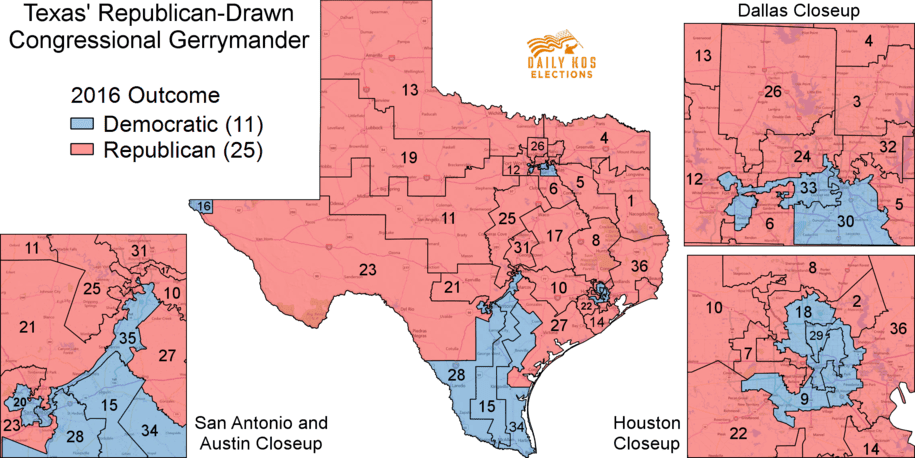 Last week’s ruling by a three-judge panel in San Antonio that the Texas Legislature racially discriminated in drawing three congressional districts is being hailed as a major civil rights triumph in some legal quarters.

“This is a huge victory for voting rights plaintiffs,” wrote nationally-recognized elections law expert Richard Hasen in his Election Law Blog. He predicted the 2-1 decision was unlikely to be overturned by the U.S. Supreme Court because “it closely tracks Justice (Anthony) Kennedy’s views of the issues in this area.”

Kennedy is often the swing vote on the closely divided court.

Hasen said the ruling was especially important because it could lead to Texas once again being required to pre-clear redistricting and other election matters with the Justice Department, as was required before the Supreme Court gutted the Voting Rights Act in 2013. This is because Judges Rodriguez and Orlando Garcia found intentional discrimination in the case.

The Justice Department under Attorney General Jeff Sessions is not likely to be much of a watchdog on voting rights matters, but that would likely change if a Democratic president is elected in 2018. (sic)

The three judges who decided the case include one Democrat and two Republicans. Ironically, the decision may have gone the other way if one of the judges hadn’t been punished for joining in an earlier ruling in the case. Here’s the back story.

Judge Xavier Rodriguez, a graduate of Harvard University and the University of Texas law school, was first appointed to the Texas Supreme Court by then-Gov. Rick Perry. He lost in the Republican primary, however, when he had to stand for election. He returned briefly to private practice before being appointed to a federal district bench here by President George W. Bush.

Back in 2013, Rodriguez was asked to fill out the voluminous paperwork to be considered for promotion to the 5th Circuit U.S. Court of Appeals. President Obama had selected a Democratic judge from Corpus Christi, but the two Republican senators reportedly made it clear they would block her nomination. So the Obama Administration lit on Rodriguez — a non-ideological choice who had been appointed to important benches by two Texas Republican leaders.

But the appointment languished until 2015 when, a friend of Judge Rodriguez said, he was told his name was withdrawn because of a lack of support from the two senators. The reason: His previous rulings in the redistricting case.

Had Rodriguez been elevated to the appellate court, he might well have been replaced with a more conservative Republican on the three-judge panel hearing the redistricting case. The 2-1 decision could have gone in the other direction with Rodriguez’s replacement joining the very conservative third member of the panel, Judge Jerry Smith of Houston.

Smith, a Reagan appointee, issued a bitter dissent. He was especially hostile toward lawyers from Obama’s Justice Department.

“It was obvious, from the start, that the DOJ attorneys viewed state officials and the legislative majority and their staffs as a bunch of backwoods hayseed bigots who bemoan the abolition of the poll tax and pine for the days of literacy tests and lynchings,” Smith wrote. “And the DOJ lawyers saw themselves as an expeditionary landing party arriving here, just in time, to rescue the state from oppression, obviously presuming that plaintiffs' counsel were not up to the task.”

A postscript: The seat on the 5th Circuit Court of Appeals for which Rodriguez was considered remains vacant. In fact, two seats reserved for Texas judges on the appeals court are vacant. So, going back as far as 2011, are 11 seats on federal district courts around the state.


Next week begins the confirmation hearings for Neil Gorsuch to be elevated to the Supreme Court, to fill at last the seat left vacant by the demise of Antonin Scalia fourteen months ago.  Senate Democratic resistance to Gorsuch is reportedly impotent.  Scalia oversaw appeals to the SCOTUS from the Fifth Circuit; that will likely also be Gorsuch's beat upon his confirmation.  As for the rest of these federal bench vacancies, it remains to be seen whether Chuck Schumer, et.al. will have the skilz to play the stalling game as well as Mitch McConnell, etc. until 2020.

Per the Twittersphere, official Dems and major para-group hangers-on, including and starting with David Brock, have thrown in the towel on ad campaigning against Gorsuch. Ryancare / Trumpcare? is considered much lower hanging fruit.