With this week's blog post roundup, the Texas Progressive Alliance can remember a time when Republicans thought Russian meddling in our affairs was a bad thing. 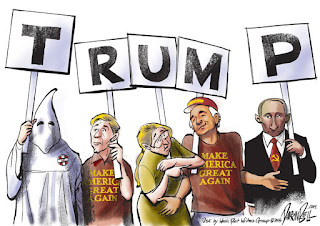 Off the Kuff notes that businesses have calculated the cost of Dan Patrick's bathroom bill, but wonders if they have calculated the cost of Dan Patrick.  And Libby Shaw at Daily Kos is grateful to a Houston Chronicle business reporter for exposing Patrick’s rationale for his bathroom obsession. Practicing bigotry to mask fiscal and ethical failures. How we can expose this malpractice?

Socratic Gadfly looks at Trump's so-called "generals' cabinet," and suggests some additional generals, and CouldBeTrue of South Texas Chisme is also alarmed over Trump's military cabinet choices. This is how a junta starts. He did promise regime change.

The December 7th anniversary nobody in Southeast Texas wants to commemorate was shared by PDiddie at Brains and Eggs.

The Lewisville city council reviews its legislative priorities as the 86th session approaches, and local control is going to take a hit, according to Rep. Burt Solomons and the Texan-Journal.

Neil at All People Have Value said Oakland warehouse fire victims used alienation to create rather than to attack. APHV is part of NeilAquino.com.

And here's more news from around Texas.

The Great God Pan Is Dead contemplates fire codes and art spaces in the wake of the tragedy in Oakland.

After arrests made in the wake of anti-Trump protests, the Houston Press sees that the ACLU of Texas will be sending legal teams to monitor the cops at future Houston protests.

Grits for Breakfast observes that asset forfeiture to the government now takes more money from people than burglars, and the number of heroin deaths has surpassed gun homicides.  (Can't blame Donald Trump for either of those, can we?)

Juanita Jean gets mad about the latest governmental intrusion into uteruses.

Better Texas Blog highlights how much Texas will lose if the Affordable Care Act is repealed.

And The Dallas News reports that the Killeen ISD has gotten themselves in hot water over a showing poster from A Charlie Brown Christmas.
Posted by PDiddie at Monday, December 12, 2016