Washington Post header: "Trump era confronts organized labor with gravest crisis in decades".  That is not an understatement.

President-elect Donald Trump’s Twitter attack this week on a union official, followed by his choice of a labor secretary who has criticized new worker protections, has rattled leaders of the American labor movement, who fear unions may be facing their gravest crisis in decades.

On Thursday, Trump announced that he would nominate as his labor secretary Andrew Puzder, a fast-food executive who has opposed additional overtime pay for workers and expressed skepticism about increasing the minimum wage. That followed a pair of Twitter messages Wednesday evening in which Trump attacked an Indiana union leader who had criticized him, saying the official had done a “terrible job representing workers.”

The actions, coming just four weeks after Trump won the presidency in part by wooing union voters with promises of better trade deals and a manufacturing revival, fed fears among national labor leaders that Trump was now planning a broad assault on unions.

“The president-elect campaigned on reaching out to working people, and this is one of a string of nominations that run counter to that,” said Eric Hauser, the AFL-CIO’s strategic adviser and communications director.


Indeed, it was labor's rank-and file in the Upper Midwest states of Michigan, Wisconsin, and Pennsylvania -- Hillary Clinton's so-called firewall -- who defied their bosses (and their union's PACs) and swallowed Trump's line about "bringing jobs back".  They appear to be the ones most severely duped.  But we're just to the holiday season's halfway point and there's a lot of duping yet to be revealed.

The crisis for unions is a combination of direct threats from Trump’s agenda and the knowledge that many rank-and-file workers are sympathetic to his populist message. Exit poll data from the Nov. 8 election shows that Hillary Clinton’s smaller margin of victory among union members, along with Trump’s unusually strong performance, helped him win the White House.

The last time unions faced such an environment was when President Ronald Reagan slashed regulations, named a con­­struction company exec­utive as labor secretary and took on the air traffic controllers union. But, even during that onslaught, unions were in a much stronger position than today — representing 20 percent of private-sector workers compared with 7 percent today.

The list of potential setbacks for the labor movement is daunting. Some union leaders are worried that a Trump administration would attempt to introduce a national right-to-work law — allowing any employee anywhere to exempt themselves from participating in a union — and block unions from deducting dues from paychecks.

Trump also will be able to fill two of the five spots on the National Labor Relations Board, which adjudicates disputes between unions and corporate management.

Some union leaders, who spoke on the condition of anonymity because they were not authorized to speak for the unions, said that labor leaders also fear that a Republican Congress and Trump White House would launch investigations of union finances­ while failing to enforce labor laws when employers underpay workers or violate occupational safety rules.

“The assault on unions, as institutions, is indeed unprecedented in scale,” Georgetown University historian Michael Kazin said in an email. “Even in the 1920s, conservative Republicans did not argue against their very legitimacy.”


This comes on the heels of the Obama administration's setback in a Texas court last month regarding the expansion of overtime rules for non-salaried employees, many of whom happen to be single mothers.  A few businesses had already rolled out the changes, including raises for some and converting others to hourly, in anticipation of the law's implementation on December 1.  A number of employers cheered the ruling striking the order down.

Which brings us to the soon-to-be Labor Secretary, fast-food magnate Andrew Putz-der. 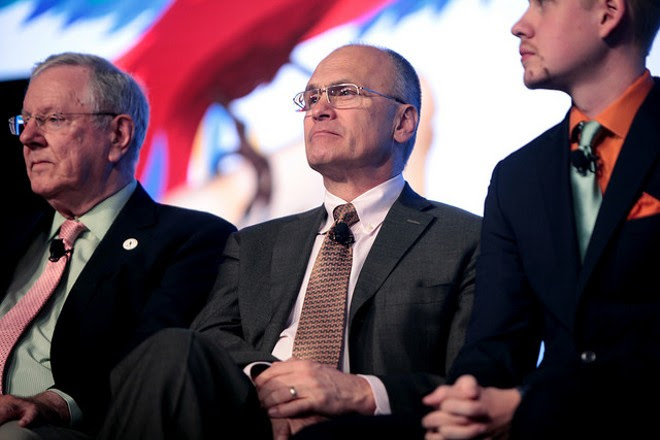 Puzder, who is chief executive of CKE Restaurants, which includes fast-food chains such as Hardee’s and Carl’s Jr., has sharply criticized Obama’s efforts. The overtime rule would affect many low-paying transient jobs such as those in retailing or the fast-food business.


Putz-der has a lot less going for him as well.  As you might have guessed, he thinks raising the minimum wage is a bad idea.  As he does the previously-referenced overtime rule and also the Affordable Care Act.  But he's a big fan of women in bikinis selling his hamburgers.

Commercials for Carl’s Jr. feature scantily clad women, which has drawn criticism, the New York Times pointed out, from women’s groups and religious activists. The aim of these ads, according to Entrepreneur magazine, is to attract “hungry young guys.” And it’s an approach that Puzder enthusiastically endorses.

"If you don't complain, I go to the head of marketing and say, 'What's wrong with our ads?'" He told Entrepreneur in 2015. "Those complaints aren't necessarily bad for us. What you look at is, you look at sales. And, our sales go up."


In his career before fast food, he helped write a landmark anti-abortion bill that became law.

Puzder was an attorney in St. Louis in the '80s and '90s, when he helped draft a law that placed strict restrictions on abortion access in Missouri, according to the biography on his blog. The law banned the use of public employees and public facilities in performing abortions. The executive director of an abortion clinic in St. Louis sued to overturn the law, according to the New York Times. The suit ultimately went to the Supreme Court, which upheld the restrictions, marking it the first time the court allowed states to enact restrictions on abortion, the Times reported.


He does seem to want to work toward solutions, for what that's worth.

Puzder later teamed up with the very man who sued to overturn the law he wrote. Together, Puzder and B. J. Isaacson-Jones, then executive director of Reproductive Health Services, established the Common Ground Network. The organization, which is now nationwide, seeks to find ways for pro-choice and pro-life advocates to work together, including promoting adoption and limiting unwanted teen pregnancies, according to the Chicago Tribune.


But his reputation as a wife-beater, taken together with the reports above, IMO cements him firmly as a misogynist.  The local newspaper had the story ...

Andrew Puzder, the St. Louis attorney who rose to become CEO of Carl's Jr. and now stands as Donald Trump's pick to be Secretary of Labor, was accused of abuse by his first wife in the 1980s — with police twice summoned to the couple's home.

The allegations were first aired in the couple's 1989 divorce. The abuse allegations in the divorce filings then became the subject of a July 26, 1989, Riverfront Times cover story.


Again FWIW, he denied the allegations and his ex-wife has recently walked them back, claiming they have resolved their differences and have a convivial relationship today.

Of all of Trump's shitty Cabinet selections to date, this one might be the worst.  Working men and women are quite likely to suffer the most over the next four years.  I wonder if they will wake up and smell the coffee.
Posted by PDiddie at Friday, December 09, 2016