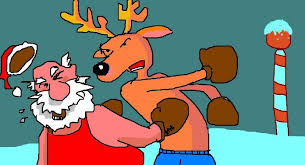 It's not as rough on Santa as you might think.

Off the Kuff looked at presidential voting results in two Congressional districts with an eye toward future elections.

Socratic Gadfly punctures bits of East Texas, and general Texas, historical mythology with a look at the history of Nacogdoches. (Part Two this coming Friday.)

Grits for Breakfast watched the video of Fort Worth police officer baiting, and then arresting, the woman who called 911, and wonders right alongside the police chief if it was rudeness or racism.

In a 24-hour period last Thursday, Trump managed a trifecta: antagonize US-Israeli relations, start a nuclear arms race with Russia, and knock Lockheed Martin around for a discount on F-35s by threatening to have Boeing build a 'modified F-18' in its place.  PDiddie at Brains and Eggs says that if we don't get his Twitter account suspended, he's going to kill us all.

jobsanger reprints a FWST op-ed that points out that the Texas Lege still plans on defunding Planned Parenthood.

The Lewisville Texan Journal reported on the Texas Education Agency's final school ratings for the year, and quoted some administrators as calling them a crock.

South Texas Chisme says that in the wake of the Corpus Christi public water emergency last week, that city's manager says there's "a lot" of non-compliant users of city water.

Neil at All People Have Value took a picture of Houston's excellent Christmas Tree of Tires.  APHV is part of NeilAquino.com.

And still more Texas news from a variety of contributors!

From space poop to Jupiter, the Houston Press recounted their ten best 2016 stories about NASA.

The Longview News Journal exposes the East Texas judges who pay themselves a $25,000 bonus just for showing up for work.

The Texas Observer posts the worst of 2016's social media offerings from the likes of our elected 'representatives' such as Robert Morrow, Konni Burton, and Sid Miller.  Basically all of Sid Miller's Facebook timeline.

Equality Texas sees North Carolina buckling under the economic pressure of their 'bathroom bill', and watches as Texas charts a similar ill-fated course.

Ashton Woods at Strength in Numbers excoriates 'Pantsuit Nation' in his semi-regular series on intersectionality and the problematic white gaze.

And Houstonia has the Texas state park camping trips you need to book now.
Posted by PDiddie at Monday, December 26, 2016