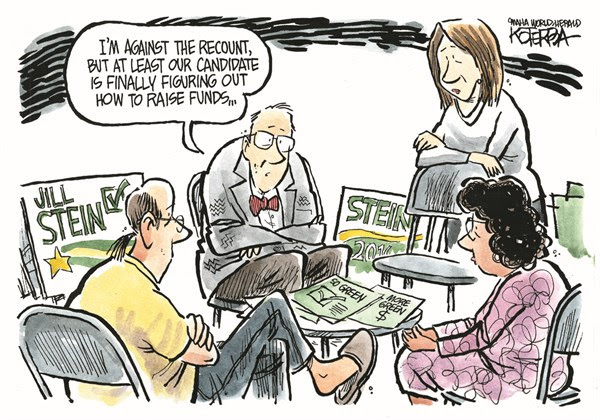 With Michigan's recount ended by federal by court order last Friday (despite some severe irregularities), the conclusion and subsequent certification of Wisconsin's vote, and the scolding rejection by a federal judge of the recounting in Pennsylvania this past Monday, the 2016 presidential election is to be finally determined by the Electors meeting in College on December 19.  There's some question as to how that might turn out, about which you've likely heard.  Don't get your hopes up is all I'm sayin'.  Jill Stein announced day before yesterday that any funds remaining from her effort would be donated to "groups dedicated to election reform and voting rights".  There are election lawyers disturbed by the outcomes of the erstwhile recounting, and there are bloggers happy/not happy about it, and the strife it caused within the Greens themselves.  Gadfly did his post-mortem a month ago; David Collins' is a week old, taking stock of the ending and looking ahead.

Jeffrey Koterba, above, perhaps speaks for the Greens on the other side of the internal divide from me.  Since the GP has not demonstrated they can raise large amounts of money from a donor base in small amounts (as both Stein and Bernie Sanders proved is possible, but only if you cater to Democrats' whims) then they're not going to grow.

I supported the recount and Jill Stein, still do and will going forward because, as blogged three weeks ago, I'm not so much of a purist as some.  I believe that with a shrinking electorate (Texas will be an exception, as I'll show in the next paragraphs) and thanks to the combined efforts of people like Trump's eventual Supreme Court nominee, Greg Abbott, Catherine Englebrecht, Kris Kobach, and many others -- the fastest way to greater relevance for US Greens (as blogged a month ago) is going to be to convince former Democrats like me, and more significantly some electeds, to come over and bring some of their professional campaign skills and tools with them.

The scale of the task remains massive: here in the Lone Star, Greens nearly tripled their share of the presidential vote in 2016 over 2012, but that translated into just 71,558 votes, or 0.80% (compared to 24,657 and 0.31%).  As you might already know, the next Green who bids for statewide office -- on the party line that must be secured via petition following the 2018 major party primaries -- must capture 5% of the statewide vote in order to hold that line in 2020.  That's easily done if the Texas Democrats fail to run in all the races, and impossible if they do not.

Using the same TXSoS numbers as above, and at the link here, the Texas electorate grew over the past four years from 7.993 to 8.969 million voters, or a 12% increase.  But despite the most favorable climate for third party growth in at least sixteen years, Jill Stein's share managed just a bit more than a 2.5% gain.  With an assumption that there will be another million Texans voting four years from now, and in order to reach 5% of that projected ten million voters in 2020, the next Green presidential candidate would have to earn -- not siphon -- 500,000 votes in Texas just to keep ballot access for the party in the 2022 midterm elections.

That's simply not going to happen absent a full collapse of the national Democrats, an extinction event long overdue but certainly more possible than it was on November 7, 2016.  Waiting for that Godot, however -- as the Democrats have helpfully demonstrated with the mythical Latino surge voter -- is folly.  If in the short term the DNC chooses soon-to-be-ex-Labor Secretary Tom Perez as chair instead of Sanders-supported Keith Ellison, there will be more erosion from the progressive wing of the Democratic Party.  How much, quantifiably, can best be answered today with the words "not much" and "not enough".  All you need to do is look at Sanders' 33% share of the Democratic primary vote last spring to see that the Sandernistas in Texas were dutifully sheperded onto the Clinton bandwagon in time for November. 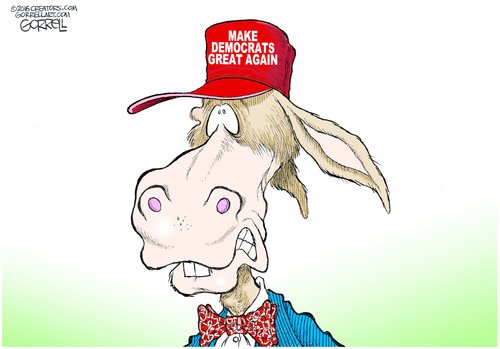 So as left-leaning bitter-enders agitate for something resembling reform with hopes the Democrats can engineer at least a White House comeback, the rest of us continue to endure the status quo: full GOP control, with Texas (and many other states, mind you) statewide races determined in the GOP primary and not the general, a state Democratic party apparatus moribund, unfunded, and at less than a 40% share and sinking.  Twenty-eighteen stands woefully small chances of moving that needle.

And as long as Texas Democrats can employ a recruiter like Cliff Walker and judicial candidates like Betsy Johnson, they can keep their finger in the dyke and prevent less than one percent of their potential vote leaking out to the Greens.  I say 'potential' because this is what Democrats believe: Green votes all belong to them, and no facts seem able to crack that shibboleth.  Maybe some day, but Team Donkey remains content to sell shit sandwiches as hope and change for the foreseeable future.

A pretty dim view of US progressivism generally and Texas particularly, irrespective of your being blue, green, or red, but an accurate one.  There is now a model for progressive populist activism, including electoral gains, but it will be necessary for those of us on the left to stop fighting with each other and work together, across party and even left-ideological lines.  A tall order, but at least there's some evidence it can be accomplished.

" ... I think the success of the Richmond Progressive Alliance as an electoral force really is due to the fact that it has taken an exceptionally ecumenical approach. It has welcomed people who are left-leaning Democrats, who are independents, who are registered members of third party like the California Greens or the California Peace and Freedom Party. There are members of different socialist groups. But it’s a broad charge, and under the banner of a local progressive movement, people have agreed to set aside disagreements that they or the organizations they belong to nationally might have about some issues in the interest of getting things done in a kind of united front at the local level. And that’s, as I’m sure you know, not characteristic left behavior in this country. Too often, people can’t get beyond their petty factional squabbles and ideological differences and [corroborate rather than compete]. So creating that kind of united front and kind of rebranding as the Richmond Progressive Alliance and welcoming people with different views and organizational affiliations on a left-liberal spectrum was really important."


More at the link from Steve Early, quoted above, and his book.
Posted by PDiddie at Thursday, December 15, 2016

Good overview in various ways. Did you get an invite to that GP conference call for this evening? I'm going to email the invite to you in case you didn't. (I did because I signed the "statement" on Flowers' website.)

Got your email and registered, thanks. That will my third webinar of the day.