-- In hopefully the last epic fail of the Hillbots (at least for 2016) it looks like they succeeded in getting Electors to be faithless.  To Hillary Clinton. 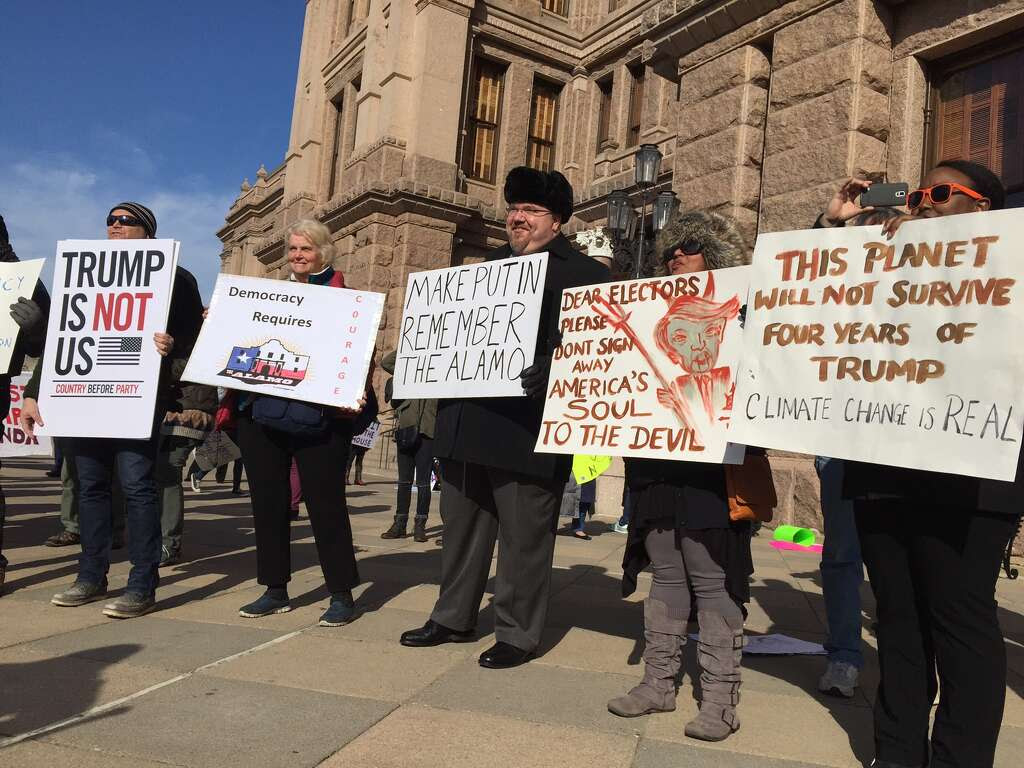 More photos from the Chron here


I relish the irony of Ron Paul having earned more EC votes -- well, vote -- than Gary Johnson.  And anything that angers Greg Abbott would delight me, no matter what it was.

But four Democratic electors voted for candidates other than Hillary Clinton:

Only eight of 12 Democratic electors in Washington cast their votes for Democrat Hillary Clinton, who won the state in November. In an act of symbolic protest, three electors voted for former Secretary of State Colin Powell, and one cast a vote for Faith Spotted Eagle, a Native American elder from South Dakota.

It’s the first time in four decades that any Washington electors have broken from the state’s popular vote for president.


Emphasis theirs.  Three Washington state Democratic Electors, pledged to Her, appear to have conspired to vote for a Republican who refused to run for the office and was never seriously considered for it by the Republicans.  You can't make this stuff up.  If there's hope for abolishing the Electoral College -- and there isn't very much IMHO -- it has a little seed germinating in the aftermath of this impotent act of defiance.

Democrats that choose Tom Perez over Keith Ellison will extend the losing streak in 2018.  That's my early bet, and I'm bookmarking me for future gloating.

-- I believe Barack Obama's acts of clemency -- more than the previous eleven presidents combined, 50 times the number of his most recent predecessor, George Walker Bush -- are the very best thing he has done as president of the United States.

Just weeks before leaving office, President Obama on Monday issued 78 pardons and commuted the sentences of 153 prisoners, extending his acts of clemency to a total of 1,324 individuals, by far the largest use of the presidential power to show mercy in the nation’s history.

Of the 231 people who received a pardon or a reduced sentence from Obama, virtually all had been serving sentences under tough anti-drug laws, including those convicted of low-level, nonviolent crimes like possession of cocaine.

Those who received pardons had completed their sentences and are, in the words of Neil Eggleston, the White House counsel, now leading “a productive and law-abiding post-conviction life, including by contributing to the community in a meaningful way.” The pardons wipe away any legal liabilities from a conviction.


I stepped away from this president in 2009, when he did not show any commitment to getting the legislation passed that has long borne his name.  I was incensed by his replacing the torture of the Bush administration with unadjudicated assassination of suspected terrorists by drone, a legacy of fomenting the very thing he pledged to eradicate.  This legacy will live on long after him.  Not just after he leaves office, but after he is dead and gone.

The president has said he has been motivated to exercise his clemency power by a belief that the sentencing system in the United States was used to lock up minor criminals — often minorities — for excessively long periods of time.

At the end of 2015, as he commuted the sentences of 95 federal prisoners, Obama said it was “another step forward in upholding our ideals of justice and fairness” and added that “if we can show at the federal level that we can be smart on crime, more cost effective, more just, more proportionate, then we can set a trend for other states to follow as well. And that’s our hope.”

Tens of thousands of inmates, mostly young African-American or Hispanic men, were locked up in the effort to combat drug violence during the past three decades. Many of those men were sentenced under federal guidelines that required them to serve decades or longer in prison.

During the past several years, a bipartisan coalition emerged to overhaul that system. The unlikely allies included conservatives like Charles G. and David H. Koch, the billionaire brothers, and the Center for American Progress, a liberal advocacy organization with close connections to Hillary Clinton.

But hopes for a legislative deal to overhaul the nation’s sentencing system failed to materialize during the bitter 2016 presidential campaign. That left Obama with one option: to use his clemency power case by case.


Emphasis above is mine.  I applaud this action and I hope the president will pardon more individuals before he leaves office.
Posted by PDiddie at Tuesday, December 20, 2016