Or Fright Night, if you'd rather. 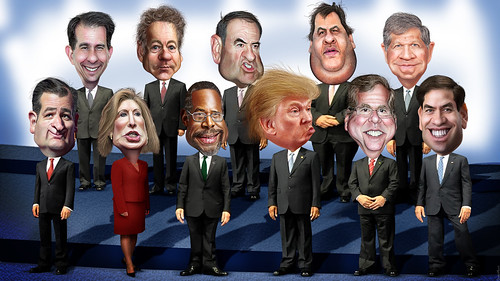 The Republican primary field looks very different today than it did nearly six weeks ago, when the first debate was held in Cleveland. Donald Trump has added to his lead, Ben Carson and Carly Fiorina are starting to show momentum — and some of the others are in danger of joining Rick Perry in falling off the map. A lot is riding on how the top 11 candidates, and the four in the undercard forum, handle the questions from CNN’s moderators at the Ronald Reagan Presidential Library in Simi Valley, Calif. Here is a rundown on where the race stands and what each of the candidates needs to do to stay competitive.

-- Trump is coming off back-to-back days of massive rallies, in Dallas and in Los Angeles. He spoke to roughly 15,000 people Monday inside the American Airlines Center, home of the Dallas Mavericks and the Dallas Stars, and on Tuesday he held a rally aboard the 887-foot-long USS Iowa, a decommissioned battleship in the port of Los Angeles. He continues a steady rise in the polls, although his velocity has decreased somewhat. The question is, does this debate mark the beginning of a downward trend for Trump, or can he actually keep gaining in popularity? He’s led the pack now for almost two months, going from the mid-single digits in early July to the clear frontrunner, at 22 percent, in the space of a few weeks. He’s now at 30 percent, but his negatives are very high with a significant number of voters. Political observers have gone through different stages in their reactions to Trump. First came amusement, then mockery, and we have now been in the mild to moderate alarm phase for a few weeks. What happens with Trump on Wednesday night and in the following days will determine whether the GOP establishment goes into action and does what it can to derail and take down the demagogic anti-politician.


Trump is starting to lose women, which is the first data point that his act is finally getting tired.  (But so is Hillary Clinton, a more shocking turn of events.)

-- Carson is arguably the story of the last month, even if he has been overshadowed in the press by Trump’s “perpetual attention machine.” Carson has come from the middle of the pack to now a clear second place, at around 18 percent. And that’s despite a performance at the first debate that most political experts thought was forgettable and unimpressive. But clearly Carson’s lack of experience and absence of establishment connections has benefited him. Now, however, the soft-spoken retired surgeon is becoming a target. He and Trump have sparred recently. And he’ll be under a much bigger microscope than he’s ever experienced.


There is no apparent reason for a neurosurgeon who disbelieves climate change to be rising in the polls except that he benefits from the Herman Cain Effect, which is a wormy calculus swirling in the conservative hive mind that tells them African Americans of all political persuasions will vote for an African American even if he's as lousy a candidate as Cain or Dr. Carson.  Large portions of the Republican racist base believe they can defeat any Democrat by splitting the black vote.  I would like to see this theory tested, which is the only reason I'd like to see Carson maintain his standing near the top of the polls.

-- Jeb Bush has to improve his debate performance. The good news for him is that it won’t be incredibly difficult to do better than he did in Cleveland. The bad news is that he is cratering in the polls. Donors are restless. Bush is flying commercial now to some events rather than on a private jet, a telltale sign of a campaign that is tightening its purse strings. Still, Bush retains significant advantages in his ability to raise money and field a national organization capable of driving supporters to the polls in a drawn-out primary. [...] If he can deliver any kind of body blow to Trump, that would be a huge win for Bush. But at the very least, he needs to show more forcefulness and clarity.


Bush won't be able to lay a glove on Trump.  He can only hope that Trump's mouth eventually does him in.  And even when that finally happens, Bush will see little of the electoral benefit.

-- The freshman U.S. senator from Texas continues to watch the rise of the non-politicians — Trump and Carson and Fiorina — and waits with open arms for the moment when the bottom falls out of their candidacies. Cruz advisers have watched Trump show up to events with little to no organizational effort to identify and collect contact information from supporters. They don’t think he has any capacity to translate his current popularity into votes, even if he doesn’t implode. “I think we are in a breakout moment,” a Cruz adviser said recently. But Cruz does need Trump to lose some altitude for that to happen. Cruz is focusing his energies on denouncing President Obama’s Iran deal, on defunding Planned Parenthood, and on talking about religious liberty. He is third in Iowa and positioned quite well for the fall. He needs to avoid any big errors or damaging moments.


A lot of luck has to break Cruz's way, but I think it is more likely than not that he stands to benefit from the deflation of The Donald, and Mike Huckabee, and the other weaklings mentioned at the end here.

My prediction today is that Ted Cruz will be one of two left standing sometime next spring.

-- Political observers have expressed surprise that Marco Rubio did not reap any real benefit from the first debate, where most agreed that he was among the most impressive. But the U.S. senator from Florida continues to play the role of the tortoise. He does not have a large, expensive campaign and so he does not have to worry about sustaining a massive fundraising effort. He is making smart organizational moves to position himself well in Nevada, which goes fourth in the primary process. His campaign said not to expect any surprises. He’ll be looking to hit singles and doubles, counterpunch if and when he’s attacked, and stay within himself. There’s not a lot of incentive for others to go after him at the moment, however, so it is likely to be clear sailing for him.

-- The former Hewlett-Packard CEO was the breakout performer from Cleveland. She wasn’t even in the primetime debate, but her eloquence and charisma onstage, as well as in an interview afterward with MSNBC’s Chris Matthews, vaulted her into the national conversation and bumped her polling average up to as high as 6 percent in mid-August. She has lost a little momentum since then, but was also given a gift by Trump when he insulted her looks in an interview with a Rolling Stone reporter. Fiorina spokeswoman Sarah Isgur Flores said the Reagan Library debate is “another opportunity for us to introduce Carly to a lot of voters. She still has among the lowest name ID in the field.”


Fiorina is most likely to be someone's vice presidential ticketmate.  Not Donald Trump's but somebody's. The latest news about 30,000 more layoffs at HP should provide easy debate fodder for the debate mods and tough questions for her.

-- Scott Walker has fallen the furthest of any candidate since the debate in Cleveland. For a sampling of all that has been written about his woes, just Google “Scott Walker struggles.” Rep. Reid Ribble (R-Wis.), a supposed ally of Walker’s, said in a recent Molly Ball look at Walker’s downward trend, “At some point he will figure out what he actually believes.” Walker has been going the wrong direction for months. He has developed a reputation as a flip-flopper. His campaign knows he needs to have a strong performance at the Reagan Library. “He didn’t use all of his time” in response to every question during the first debate, said an adviser. “He recognizes he can work on that” and that he needs to show “a bit more energy and contrast.” The nod to “contrast” is a signal that Walker will be more aggressive in critiquing others in the field. But Walker also remains in fourth place in Iowa. His favorables are high there. He may need to stop the bleeding, but he doesn’t need to panic yet. “We’re playing the long game,” the adviser said.


As much as he has already lost, he still has the most to lose.

-- The former Arkansas governor may have hoped that his rally outside the Carter County Detention Center in northeast Kentucky, on behalf of the county clerk who was jailed for refusing to issue marriage licenses to gay couples, would have given him a bigger bump than he has experienced. And that may still come. But you can bet that Huckabee will bring up his role in the Kim Davis saga. It might be interesting to see what he says if Cruz “mentions” that Huckabee’s staffers prevented Cruz from going onstage and speaking. Clearly, Huckabee wanted the spotlight for himself. But it might be too rich for Cruz, who himself loves the stage, to complain about it.


Mike Huckabee will never be the nominee.  As crazy as the rest of the field is, Huck is just too far gone for even the worst of the GOP base.

-- Like Fiorina, John Kasich’s polling average was so low around the time of the first debate that it’s not visible on the Real Clear Politics graph. And also like Fiorina, the Ohio governor was one of the most talked-about surprise candidates in Cleveland. The home crowd gave Kasich a huge ovation, he made some waves with his welcoming rhetoric toward gays and lesbians, and he has since seized third place in New Hampshire polling, where he is now discussed as a major obstacle there for Bush ­— who is seen as needing to do well in the state since he has little chance to win Iowa. Kasich needs a solid performance here, but nothing spectacular. He just needs to keep his modest momentum going and keep plugging away in New Hampshire.


Frankly, it's Kasich that I worry about the most.  In a saner conservative environment, he'd be the guy at the lead.  And he could still get there.  He's my choice to be standing with Cruz in the rubble of the mid- to late 2016 primary season. 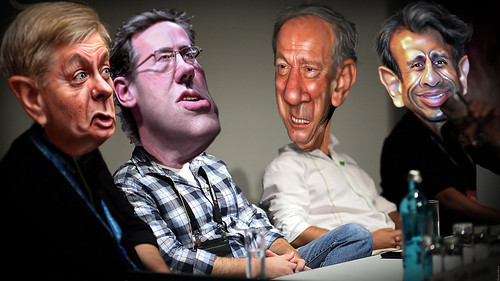 Rand Paul, Chris Christie, and -- once again at the little table -- Bobby Jindal, Rick Santorum, Lindsey Graham, and George Pataki are all dead men running.  Rick Perry is saving them a seat at the bar for whenever the third debate happens.
Posted by PDiddie at Wednesday, September 16, 2015

I have a couple Republican friends who love Kasich. But the mere fact that I'm old friends with both of them shows that they're not the sort of Tea Party people likely to flood the primaries.

I don't know that someone that moderate can get the nomination, especially since a lot of Republicans believe they nominated moderates the last two times and still got flattened.

Of course, they won't be running against someone of Obama's strength this time.

Honestly, Cruz seems to me to be the candidate best playing to his particular strengths and constituencies. I agree with you - he'll benefit in the long run.

Rubio is the one I worry about the most, despite how lackluster he's been.

I put a new poll on my blog about who's likely to drop out or "suspend" before the Iowa caucuses.