This is worse than watching Madonna through the years.  How many more versions do we need?

The New York Times reported Tuesday that the Democratic candidate will no longer use the term “everyday Americans” when promoting her plans to bolster the middle class. While continuing to draw on her experience as a new grandmother, Clinton will talk in more general terms about bettering the U.S. for future generations, instead of making specific references to her own, privileged granddaughter. And five months after launching her candidacy with a series of small, media-free meetings with voters in Iowa and New Hampshire, Clinton’s fall schedule includes upcoming appearances on “The Ellen DeGeneres Show” and “The Tonight Show” with Jimmy Fallon, and plans for larger, more informal gatherings with supporters.


More general terms than she has to this point?

In the face of an email scandal that has swelled alongside the unexpected surge in support for her less-scripted rivals Donald Trump and Bernie Sanders, Clinton aides told the Times that they are determined to highlight the former secretary of state’s sense of humor and compassion on the campaign trail.

This is, of course, just the latest attempt to reshape Clinton’s public image. In the many public roles she’s played over the last two decades — from first lady to U.S. senator to secretary of state — appearing down to earth and even human has been among Clinton’s most difficult challenges.


One she is losing. Again.

The word “polarizing” has been used to describe Hillary Clinton since she first hit the presidential campaign trail alongside her husband in 1992. Clearly interested in more than just a supporting role in the White House, Clinton’s unabashed ambition became a source of contention early on in the primary race.

By then, New York Times columnist Maureen Dowd wrote at the time, Clinton was already “on a mission to soften her image and show that she has a sense of humor.” Months earlier, she’d caused controversy with the now infamous quip, “I suppose I could have stayed home and baked cookies and had teas, but what I decided to do was to fulfill my profession, which I entered before my husband was in public life.” So, Dowd wrote, “she smiled and described herself as a wife, a mother and an activist.”


This is simply excruciating.  And it's closing in on its 24th year in syndication.

In 2014, the Clinton Library in Little Rock, Ark., released nearly 4,000 pages of internal White House communications, including a series of confidential memos revealing much of the behind-the-scenes work that went into crafting Hillary Clinton’s public image.

Memos from 1995 show Clinton staff determined to rehabilitate the country’s perception of the first lady in the wake of the health care reform failure and ahead of the 1996 election. In one of many memos sent that year, press secretary Lisa Caputo described the Clintons’ 20th wedding anniversary as “a wonderful opportunity for Hillary” to regain public affection and suggested they throw “a big party” and invite People magazine to do a photo spread of the event.

Some of Caputo’s other image-conscious ideas for the first lady included an appearance on ABC’s family-friendly sitcom “Home Improvement,” a birthday celebration for Eleanor Roosevelt to make her look “less extreme” and monthly meetings with women’s magazine editors in an effort to “turn the editors into Clinton surrogates.”


I feel like Malcolm McDowell's character in A Clockwork Orange, forced to watch the carnage until I am desensitized to it.

“For someone like Hillary Clinton, who has gone through so many incarnations in the public eye, at some point they lose themselves,” (author of the 2006 biography Hillary Rodham Clinton: Polarizing First Lady Gil) Troy said. “It’s not just about her finding her voice, it’s also about her trying to convince people that she’s authentic.”


Somebody pleeeeze tell the lady that ship has sailed. 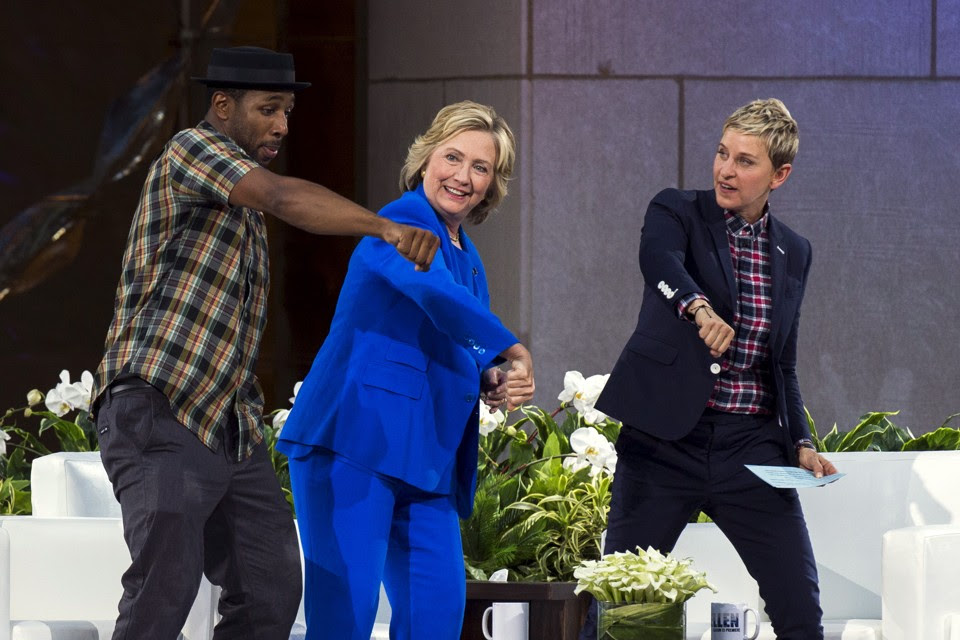 She could win more votes in the 18-59 demographic -- and thus the election, hands down -- in five seconds if she would say, 'I support the full legalization of marijuana', but she won't say that because of the millions she's taken from Big Pharma and the private prison industry.  And I swear to the Flying Spaghetti Monster, if she starts twerking I'm voting for Trump.
Posted by PDiddie at Wednesday, September 09, 2015

Your Madonna comparison seems right on.

And not Madonna in 1989, but Madonna in 2004, where you can picture a bunch of record executives sitting in front of her saying, "We know the last album didn't do well, but we have a bunch of hot young producers picked out this time who know what the kids like!"

Clinton is simply not a good candidate.