Once more from the top of your ballot to the bottom.


Both of my previous postings about this race got lots of clicks, so if you want some recent past history about these men then there it is.  Here's one relevant excerpt...

Frankly I am delighted to see Jew Don Boney run for city controller against Carroll Robinson. They have squared off before, and it wasn't pretty. No matter his own bumpy history, I will be pleased to support former councilman Boney's campaign -- unless I vet the potential candidates for a better one -- because Robinson is not only shady himself but also aligned with the absolute worst political mafia in Houston politics. I'm looking at you again, Hector Carreno, you slug. And Reps. Miles and Thompson, you should know better.

But this "lesser of two evils" option once again might let the Republican slip into office.


As a reminder: one of the easiest choices you can make as a voter is to never, ever vote for a candidate who doesn't understand what the responsibilities of the office he is running for are. 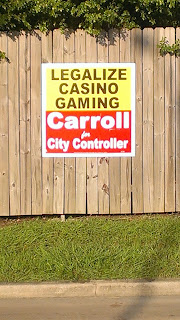 Also in the doomed-to-repeat-history department, both of the two Republicans bidding again for this seat barely lost to outgoing incumbent Ronald Green.  From 2013, here's my live-blogging as the returns came in that night (scroll all the way to the bottom):

The incumbent may yet hold off the Republican challenger, but late returns will tell the tale. At 9:00 p.m., Election Day results continue to narrow the gap for Frazer.

At 10:20 p.m., when the votes from Fort Bend and Montgomery are added, Controller Green has a 5,062 vote lead. He has narrowly avoided being upset. 38,134 Harris County voters did not vote in this race.


Khan is experienced as a former three-term council member, came very close to beating Green himself in 2009 when the term-limited Annise Parker first ran for mayor, and benefits from being tops on the ballot in a race filled with qualified candidates.  But Khan's greatest value is in siphoning off enough of Frazer's Republican support to force him into a runoff with a Democrat.  Frazer is in the catbird seat with the four Ds squaring off and "bathroom election" turnout looking promising for the city's conservatives.  He's hosted fundraisers with David Dewhurst and state comptroller Glenn Hegar, and earned the endorsement of the Kingwood Tea Party (that covers all the the GOP bases, from plain old stupid to stupid, mean, and crazy).

So who has the best chance of advancing to the December playoff with Frazer?

Morning-line handicappers might favor Son of Brown-Schlumberger.  He's been the city's deputy controller throughout the Green years, has access to all the money he needs not to lose, and he's a legacy.  Constable David Rosen wrote his own forecast of this race in the Daily Court Review praising Brown's "colossal network", evaluating the candidates most particularly on the basis of their campaign finance reports.

At least two of those four are reasons are why I cannot support Brown, though many Democrats of the Caucasian persuasion will, and that could be enough to get him over the hump.  There's also the fact that African American voters both liberal and conservative will split their votes among Boney, Robinson, and Jefferson.  The two Democratic former city council members and one former Republican state district judge (in that order) have some divergent opinions about how the office they seek helps manage the city in harmony -- or discord -- with the mayor's office.  There's an opportunity here among all these controller hopefuls for some very strategic voting.

Consider some mayoral runoff possibilities: Hall-Garcia, Hall-Turner, Turner-Garcia for just a few. With a conservative Democrat or quasi-Republican mayor and Frazer (or Khan) crunching the numbers, you can pretty much count on a lot of municipal employee layoffs to try to balance the looming crisis of a city budget, a hard line on firemen and police pensions, lots of closed libraries and swimming pools, city parks going to seed, and yes, more potholes.  If the cons sweep some of the swingy seats on council as well, a new dark day of severe austerity and homophobia takes reign over Houston.

If a someone more moderate, like Turner (or Steve Costello or Chris Bell) makes the runoff and prevails in it, then a controller like Brown or Boney or even Jefferson gives the city a little less talk and a little more action that demonstrates tolerance for threatened municipal employees, be it their jobs or their retirement plans.  In short, consider whether your choice for mayor is going to have someone in the beancounters' office he can work with... or will have to fight with.  And which of those scenarios you think might be preferable, depending on how things turn out on November 3rd.

Chris Brown straddled the fence on this matter when asked about it at the Sunnyside candidate forum.  That's not leadership, IMHO.

Prediction for the general: Too close to call on whether there will be a runoff, or whether who on either the left or the right might make one.  This is the least predictable contest on the ballot, and one which depends completely on whose voters show up.
Posted by PDiddie at Sunday, September 06, 2015