(We're back to Wrangling after one week of Wangling.) 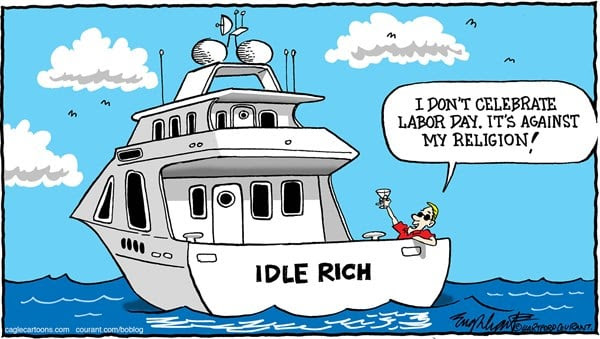 "Nobody can think straight who does not work. Idleness warps the mind." -- Henry Ford

The history of Labor Day was, as we know, once quite radical.  The Haymaker Martyrs -- along with these other forgotten heroes of the labor movement -- are best remembered as such.  The battles of labor against their oppressors is somewhat lost to the history books Wikipedia pages, but the struggles represented by the birth of the Black Lives Matter movement remind us that, as Frederick Douglass said, power concedes nothing without a demand, and that there will always be reactionary pushback against that demand. 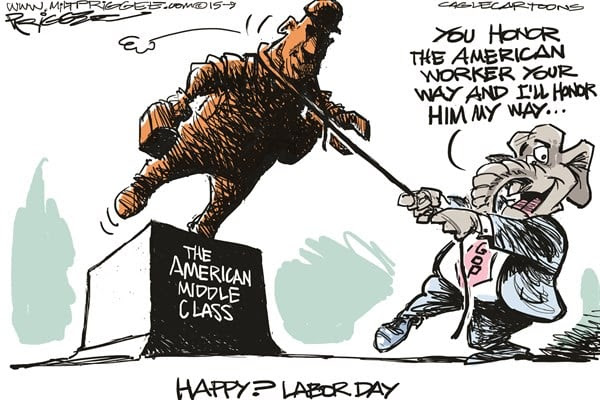 Here's to the radicals, the anarchists, and the actual socialists (not to be confused with our generation's Democratic ones) who gave us this day of rest, along with the elimination of child workers, the establishment of the 8-hour day and the forty-hour work week, the paid vacation, healthcare and retirement programs that were defined by their benefits and not by the employer's contributions.  They are precisely why we had a prospering middle class in the 1950s -- you know, the good old days for white men every Republican wants to take us back to -- and the reaction to their success from the greediest people history has ever seen is why we don't have one today.

“The only place success comes before work is the dictionary.” -- Vince Lombardi

People fought and died for those freedoms, too.

Off the Kuff reported on a busy week at the state Supreme Court, which heard the school finance appeal as well as a case involving the city's of Houston's anti-pollution ordinances.

Libby Shaw at Texas Kaos, and contributing to Daily Kos, is disgusted by the right wing's politicization of a horrible tragedy in Houston. Harris County needs a new sheriff.

CouldBeTrue of South Texas Chisme thinks Bexar County Sheriff Susan Pamerleau should be ashamed of herself for inviting death threats and hate on the TV station that broadcast video of her deputies shooting a man. Now we're supposed to trust her investigation of the incident?

PDiddie at Brains and Eggs finished posting about Houston's citywide races on the November ballot with At Large 4, At Large 5, and the controller's contest.

Egberto Willies has an example of how white allies can dispel misinformation about BLM.

Dos Centavos wants to know why Bernie Sanders doesn't have his own Hispanic billionaire funding his campaign.

Joe Deshotel at Left in Texas has the latest podcast on 'Guns, Alcohol, and the Confederate Fail Army' posted at Burnt Orange Report.

Gaswork, a new short film by anti-fractivist and actor Josh Fox, premieres in October, and TXsharon at Bluedaze has the details and the trailer.

And last, looking for a balance in a complicated world, Neil at All People Have Value visited the place were Deputy Darren Goforth was killed in Harris County and the location in Prairie View of the incident that led to the police death of Sandra Bland. APHV is part of NeilAquino.com.

Better Texas Blog is ready for a school finance solution.

TransGriot gives you some reasons to fight for the Houston Equal Rights Ordinance.

The Texas Election Law Blog fears that with redistricting still unsettled, the 2016 primaries could be a mess.

Newsdesk looks back at the Austin smoking ban, ten years after its implementation.

Bonddad has five graphs for 2015, and four bonus ones for a look ahead at our economic forecast.  Don't miss his summary at the end.

Socialist Alternative explains what the two faces of capitalism in the world represent, and the options for left movements going forward.

If You Only News presents the perfect TeaBagger socialist-free Purity Pledge.

And Fascist Dyke Motors tries to start a rumor that she is having an affair with Huma Abedin.
Posted by PDiddie at Monday, September 07, 2015

I intend to read every link. So, thanks. I'll go get a beer and start.