The House bill that continues funding for the government is expected to pass on Friday. It will go to the Senate, where Senate Majority Leader Harry Reid (D-Nev.) will face two potential filibusters of the legislation.

One is on the vote to begin debate — which is not likely to produce a fight. The language will enter the Senate with the House language, so there's no reason for conservatives in the Senate to vote against opening debate on the bill.

The key procedural movement will come next. A Democratic Senate aide said that it's likely Democrats will introduce an amendment to strip the House language defunding Obamacare after the vote to end debate occurs. Because of Senate rules, they can do so by a simple majority vote.

That makes the second cloture vote the one to watch. That's when Cruz, along with Sens. Mike Lee (R-Utah) and Marco Rubio (R-Fla.), can argue that voting to end debate will enable Reid to get rid of the House language that defunds Obamacare — "which is true," the Democratic aide said.

Here's why that's a problem: Reid needs 60 votes to end debate. He can count on all 52 Democrats (including himself), as well as the Senate's two Independents, to vote to end debate and strip the language defunding Obamacare.

That means he needs only six Republicans to vote to end debate. And 14 Senate Republicans have already expressed their dismay with the strategy — mostly because doing so involves the possibility of shutting down the government.


Even the cartoonists have grown tired of lampooing Cruz, when there are others just like him (only lacking some of his talent at bombast). 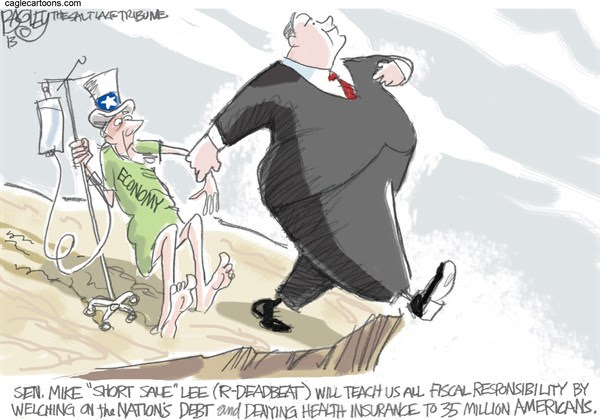 For his part, "Poop" has already worn out his welcome in Washington, and in less than a year.  You have to admit that's quite an accomplishment.

The truth is that defunding Obamacare -- just like ending abortion -- is a fundraising mechanism for the GOP.  They use the issue to fleece conservatives who have more money than sense.  It's always been this way.

There are Republicans who are starting to see through Cruz, they're just not the poor saps who sent him to DC in the first place.  These folks who vote in the Texas Republican primary are probably not redeemable at this point after so many errors in judgment (Rick Perry, Greg Abbott, David Dewhurst, Dan Patrick,John Culberson, Louie Gohmert, Steve Stockman, blahblahblah).

We have to stop allowing deranged, delusional people create the reality that the rest of us have to live in.  How's Battleground Texas coming along, anyway?

Former House Majority Leader Tom DeLay, reveling in victory Thursday against Texas prosecutors in a money-laundering case, said his political career is over but he’s eager to return to the courthouse.

If he can find a lawyer “with a backbone,” DeLay said, he’ll considering suing the Travis County district attorney for the eight-year legal clash that ended with an appeals court tossing his conviction.

“I cannot take this laying down. For the welfare of the people that serve in the future, I can’t just let this go,” he said.

The threat was vintage DeLay.


Let's allow him to get comfortable, then let's squash his guts all over the floor.  Again.

-- The NFL wages war on another halftime performer, and she's fighting back.

On Feb. 5, 2012, nearly 167 million TV viewers tuned in to Super Bowl XLVI to watch a matchup between the New York Giants and New England Patriots. Besides the football action, what had people talking that day was a halftime performance by M.I.A. and, specifically, how she extended her middle finger during a performance of "Give Me All Your Luvin' " while mouthing, "I don't give a shit."

But the NFL did care. One month after the performance, the league initiated legal proceedings against the English-Sri Lankan rapper-singer. In a March 13, 2012, filing at the American Arbitration Association, obtained by The Hollywood Reporter, the league demanded $1.5 million from M.I.A. for allegedly breaching her performance contract and tarnishing its goodwill and reputation.

In the 18 months since, the 38-year-old M.I.A. (born Mathangi "Maya" Arulpragasam) has been waging a secret legal war with the NFL over what happened at Super Bowl XLVI. Last week, league lawyers continued their push to have her deemed liable for her actions on summary judgment before moving to a trial for damages.

This is not going over too well with M.I.A, best known for her catchy agitpop music including the hit song "Paper Planes," which includes the repeated sound of gunfire. She's also used her fame to spotlight human rights abuses in her war-torn South Asian homeland. Now her lawyer Howard King tells THR that his client plans to launch a public war on the mega-powerful football league.

"Of course, the NFL's claimed reputation for wholesomeness is hilarious," King tells THR, "in light of the weekly felonies committed by its stars, the bounties placed by coaches on opposing players, the homophobic and racist comments uttered by its players, the complete disregard for the health of players and the premature deaths that have resulted from same, and the raping of public entities ready to sacrifice public funds to attract teams."


What, you forgot the NFL was a big bunch of socialists?
Posted by PDiddie at Friday, September 20, 2013

Well, not so socialistic with the players, is the NFL: http://espn.go.com/espn/otl/story/_/id/9690036/older-players-cut-nfl-settlement-concerns-growing-whether-enough-money-exists

After the way Mike Webster suffered, to cut him out because he passed away in 2002 is just fucking criminal.