These three stooges aren't actually related to each other.

-- I just don't think I can trust Carney's definition of the word 'stupid'.  Because, after all, he helped get Rick Perry elected.  And then got his own fat ass fired -- by Anita, no less -- for screwing up the presidential campaign (as if that was actually his fault).

If anybody is more stupid than that when it comes to potential Texas governors... well, it would simply have to be Greg Abbott.  What else can be said about a guy that makes his entire job about suing the federal government, and loses those lawsuits more often than not? 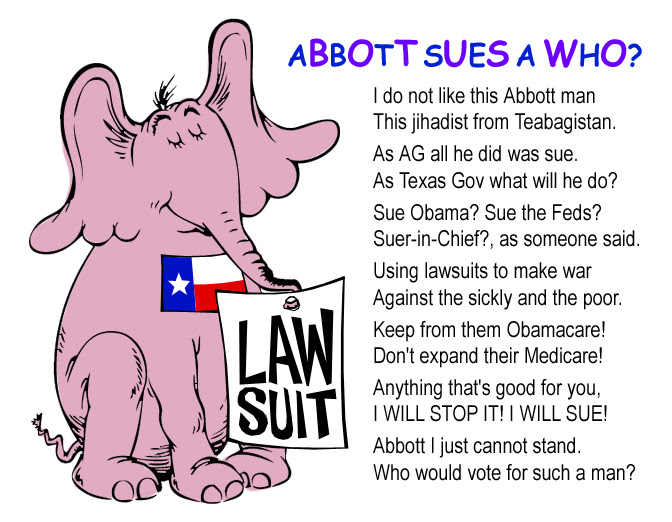 All the Republicans are trying to do here, of course, is intimidate Wendy Davis from running at all in order to demoralize Texas Democrats in their quest simply for candidates in the 2014 elections.  Clinging to their last national stronghold, they know they cannot defend their antiquated, morally bankrupt ideology anywhere else.  So they must use the same bullying tactics that they employed in the Lege at the end of the sessions last summer.

Davis is the Democrats' only hope, everybody knows it, and the GOP is straight-up scared to death about what could happen to them if she runs.

Going nasty is really all they have.

-- A Japanese newspaper is reporting that Obama will name the worst person in the world, Summers, to head the Federal Reserve and that it will happen as soon as next week.  I find myself embarrassed to be in agreement with John Cornyn in this regard (though not, naturally, for the same reasons).

As with a Congressional vote to intervene in Syria, I am going to keep fingers crossed that the whip count compels the president to back away from this ill-advised move.

Update: Summers withdraws himself from consideration.

-- A PAC has been formed and is being spearheaded by the daughter of Judge Roy Hofheinz to raise money to do advertising to try to save the Astrodome (at the 11th hour).  Emmett and my precinct county commissioner, El Franco Lee, both passed $5000 checks at the presser.  There's enough good news in this story to allow me to rekindle a flicker of hope.

Organizers of the PAC say they’ll put a special focus on winning support from voters inside Houston’s city limits, who will probably turn out in larger numbers because of the mayoral election.

“It’s a little late,” said Bob Stein, the Rice University political scientist and KHOU political analyst. “However, if the supporters of the referendum are organized, spend a lot of money and there is no organized and vocal opposition, I don’t see this having great difficulty in passing.”

I'm obviously in the demographic that favors resuscitation.  In 1965, at the age of seven, my Dad took me to a game and we sat in the center field stands, me in my Little League uni and with my glove on my hand, praying for a home run to be hit my way.  In the late '70's while in college, I sat in the nosebleed seats among the reefer smoke clouds watching the bands at the Texas Jam.  In the '90's I took my nephews to monster truck shows (and made sure they had proper earplugs to protect their hearing).

I spent some time helping Katrina evacuees there in 2005.

The last season the 'Stros played inside it, I took my Dad back for a ballgame and we walked all around the old stadium, reminiscing.  Today, he can't remember what day of the week it is, but he can remember that day.

Wouldn't it be grand if some mayoral or council candidates could summon the courage to come out publicly in favor -- or for that matter, opposition -- to the referendum?

Perhaps we might ask them where they stand at upcoming forums and debates.

(T)he coalition of preservation groups launched its educational campaign with a Facebook page called "Our Astrodome", the Twitter handle @OurAstrodome and the Twitter hash tag #SavetheDome.

We (My late husband who coached our kids) and I, took Little League teams to the Astros games at the Dome. It cost the kids $ 1.00 each to get in, if they were in uniform. I've taken grandkids out there, on more than one occasion.
Now, what I can't remember is where were the living quarters for the Hofheinz family? A group I belonged to got to tour them once. The kids bedrooms had realistic themes, jungles, trees, etc.,circus themes, all kinds of unique stuff. So, if the Dome goes, I guess that all goes, also. Would be a shame. And the Hofheinz kids should be leading the charge to save all that. JMHO.

It was at the top of what was then the AstroWorld Hotel, now the Crowne Plaza, at the corner of the Loop and Kirby.

Unless you're referring to the Presidential suite inside the Dome itself.