If you want to send a message, call Western Union

Conservatives among the general public are about to learn something liberals and progressives have known for well over ten years now: when it comes to opposing military intervention, nobody cares what you think.

Senators John McCain and Lindsey Graham, Republican hawks who have long advocated deeper US involvement in Syria's civil war, met President Barack Obama as part of his efforts to sell US lawmakers on military action.

McCain emerged from the meeting with a stern warning for fellow Republicans who may be considering voting against military action purely to damage the Democratic president.


Cover your ears and brace yourself for the "McCain is a RINO" caterwauling from the right.  The New Pacifists have a point; they just haven't connected all the dots yet.  Perhaps a cartoon will help. 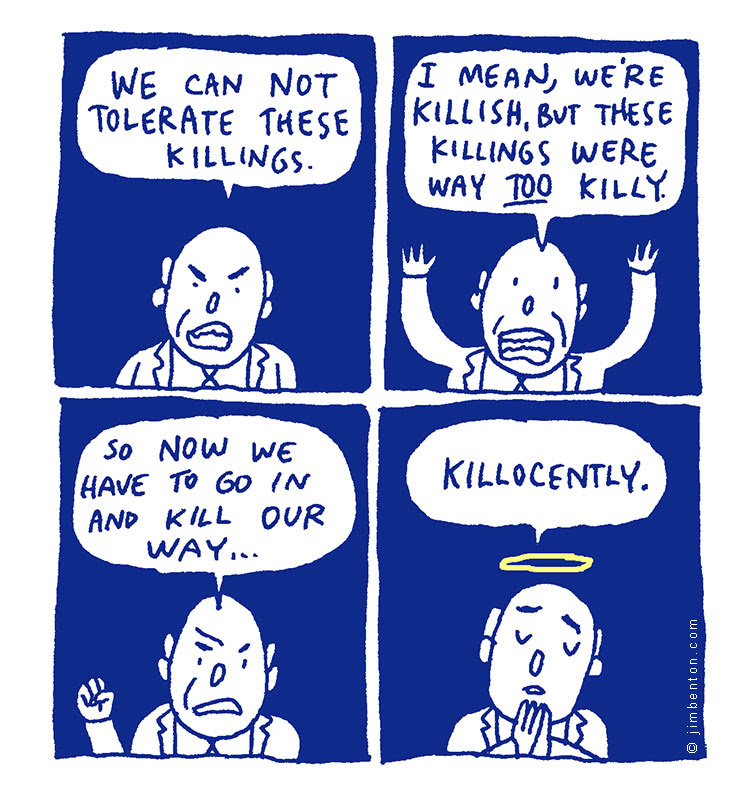 Please note that the cartoon is a deep azure blue, and that the fellow portrayed is wearing large earrings.  In other words he's a classic Neoliberal, supporting the president in whatever he does... as Britney Spears once helpfully suggested.  He might have marched in an antiwar protest in the last decade or so, maybe even made the pilgrimage to Crawford and Camp Casey.  (Update: Yes, I understand the cartoonist possibly drew his subject with bifurcated ears and excessive lobes.)

But Obama inherited Bush's mess, you see, and besides Congress has completely obstructed everything he's tried to do in the past 5 1/2 years.  So bombing Syria is really not (going to be) his fault.

This is the part where I write, again: if you need an example of what non-voters mean when they say "both parties are just alike", this would be it.

But we're peering into the conservative hive mind here, so let's get back to that.  For some fairly horrifying anecdotal evidence, read this Facebook post by Rep. Ted Poe -- who represents both the Montrose and Kingwood -- but most certainly read some of the comments.  As many as your toxicity meter will allow.

Poe was already going to vote 'no', as will many other Republicans in the House, but that really isn't the point.  As previously posted, Obama is going to launch Tomahawks no matter what Congress decides.  And maybe something more, if you believe John Lindsey McGraham.

Graham, who is facing a tough primary fight from his right for the Republican Senate nomination in South Carolina, warned of the wider consequences of a failure to back military action.

"I can't sell another Iraq or Afghanistan, because I don't want to," Graham said.

"It weighs on the president's mind strongly about the signals we send," Graham said.

"(What) I can sell to the people of South Carolina (is) that if we don't get Syria right, Iran is surely going to take the signals that we don't care about the nuclear program.


See, it's clearly about what a Republican hawk with a Tea Party challenger can sell to South Carolina Republicans. Oh, and Iran.  And also Russia.  Which is to say, Putin.  Because he's been disrespectful to Obama.

So that message is going to get sent. (Some of us dirty hippies have seen this movie before.)

Update: Poll: 2/3 Of Britons Don’t Care If Rejecting Syria Action Damages Relations With U.S. Who's going to start calling the English "crumpet-eating surrender monkeys", and call for a boycott of spotted dick? The Neoliberals or the Republican hawks?

Update: When the WSJ is busting Robert Taft and isolationism on ya, GOP peaceniks, you've already lost the battle to not fight a war.
Posted by PDiddie at Tuesday, September 03, 2013

I looked it up. You can too.

Secretary of State John Kerry said Sunday that samples collected by first responders after the reported August 21 chemical weapons attack in Syria have tested positive for the nerve agent sarin.

"In the last 24 hours, we have learned through samples that were provided to the United States that have now been tested from first responders in east Damascus and hair samples and blood samples have tested positive for signatures of sarin," Kerry said on NBC's Meet The Press. "So this case is building and this case will build."

So it's not clear to me that those were deceased, Muslim first responders; just offering the link as partial explanation.

Here, this is better.

Chemists this week around Europe are feeding samples of bodily tissue and dirt collected after chemical attacks in Syria into sophisticated machines. They are waiting for those three numbers to read out in a bar graph on a computer screen. Carlos Fraga, a chemist who specializes in nerve agent forensics at the Pacific Northwest National Laboratory in Richland, Wash., calls those numbers sarin's fingerprint.