The leadership may not want to listen to TX women, but they will have to listen to me. I intend to filibuster this bill. #SB5 #txlege
— Wendy Davis (@WendyDavisTexas) June 25, 2013

Actually it's her most recent stand (you should recall that she did this at the close of the last biennial, that time regarding the budget cuts). So the senator from south Tarrant County will represent once again at the end. 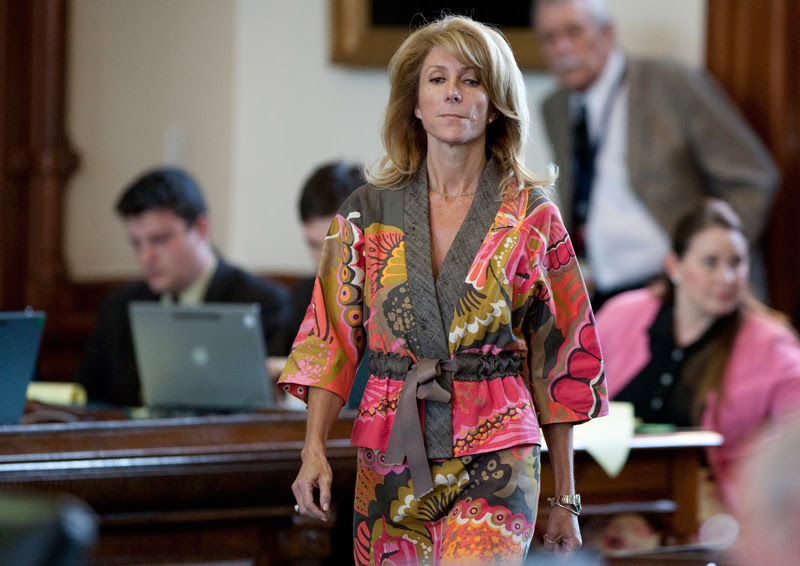 Two years after drawing national attention with a filibuster, state Sen. Wendy Davis is poised for an encore today as she plans to lead another talk-a-thon that could bring down a contentious abortion regulation bill as the special legislative session grinds to a close.

The Fort Worth Democrat signaled her intentions after the package of abortion restrictions cleared a final House vote and headed toward the Senate. Republican leaders are scrambling to pass Senate Bill 5 before Tuesday's midnight adjournment but acknowledge that a Democratic filibuster could kill the bill.

Sen. Kirk Watson, D-Austin, the Senate’s Democratic leader, said Davis, a mother of two and an outspoken advocate on women’s issues, will be the lead participant because of the bill’s importance to women.

“There’s an assault on women in this state and this legislation is a prime example of that,” said Watson. “It’s important that a woman who’s the mother of two daughters will be the one standing. We will all be there providing assistance and help.”


Davis is the last best hope once more for foiling Republican plans to damage the lives of Texans. That would be natural born Texans, of course.

If you are poor, of color, or female in this state -- God forbid you are all three -- the advice from some quarters is to get out while you're still alive.

Once again women are placed in a lower priority than a biological organism, and every other member of her family.  The pecking order in Texas is Father, unformed fetus, children who have been born, and finally the mother.

No man should make a decision regarding abortion.  They have no knowledge and no relationship to the issue.  Too many backward thinking men assume that abortion is an easy choice for a woman.  Quite to the contrary, and that is why abortion clinics are necessary.  Unlike a regular hospital, they offer psychological counseling before the procedure is performed.  In the State’s scenario, women will receive a lesser quality of health care.

If I was a woman, I’d be leaving Texas, and live somewhere where everyone was treated equally under the law.


Some of us would naturally prefer to stay and fight to the finish. Thank goodness for Wendy -- and everyone who was at the Capitol for most of Sunday afternoon, all of the night, and into Monday morning in support of what now becomes one woman's job.

No better woman for it, IMHO.

BOR has the action items for those who can be in Austin this morning. Twitter has the hashtags #txlege and #SB5 for you to follow the action (I recommend "people you follow" and not "all", as there are a few venomous Xtians and anti-choice spammers full of vitriol cluttering up the "all" feed). Hashtags can also be used to collect conversations on Facebook now. Or you can just watch the live video from the Senate floor at the TexTrib.

I understand that Davis will be reading some of the personal accounts Texas women have sent her regarding the difficult choices they have made in their lives. I hope she reads a few pages from The Handmaid's Tale. You know, for historical context.
Posted by PDiddie at Tuesday, June 25, 2013