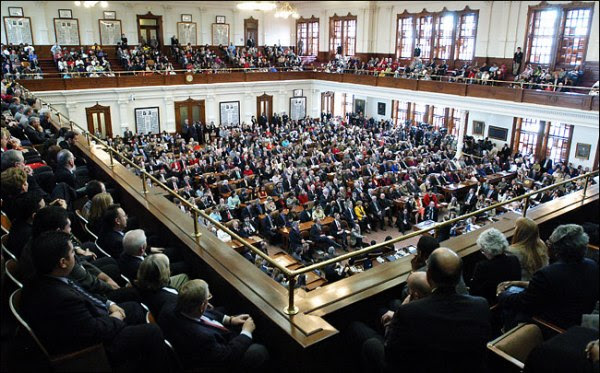 While speaking during the Texas legislative session, representative Tom Alvin (R) Altruria, dropped something unexpected on the House floor. Upon picking up the item, cameras caught a glimpse of what appeared to be a marijuana cigarette.

He quickly put it back in his pocket as legislators looked on and then continued to speak. Several DPS officers were on hand but did not seem concerned about Rep. Alvin’s possession of an illegal substance.

Ironically, the bill being discussed pertained to decreasing penalties for the possession of small amounts of cannabis. If passed, the bill would change state law and no longer jail those with small amounts and would instead only require a fine.

Rep. Alvin spoke in opposition to the bill stating “marijuana is a deadly and dangerous drug. It ruins people’s lives and is so addictive that people can become hooked on it just by touching it. We have to keep in mind that allowing any steps towards its legalization will ensure that children have access to this drug. Only by keeping it illegal and imposing tough sentences can we continue to ensure that this plant is no longer consumed by people who should not have it.”

Jajuana Thomas, 19, and her toddler son Nathan outside their apartment in Greenspoint. Thomas is five months pregnant with another child.
It's hard enough having one teen pregnancy, but what happens when you have two or more?

Public health researchers say teen birth rates are at a record low in the United States, falling 44 percent since the peak in 1991. But the problem remains, with more than a thousand teenagers giving birth every day.

Now, for the first time, the Centers for Disease Control and Prevention has examined a troubling sub-group: teens who give birth to a second, third or even fourth child. These are called “repeat teen births.” Of all 50 states, Texas ranks #1 for this phenomenon. (CDC Factsheet.)

Jajuana Thomas, 19, is five months pregnant with her second son.

“I wasn’t expecting to have a second child but now that I am I’m happy about it,” she said during an interview at her apartment in the Greenspoint neighborhood of Houston. “I wanted a girl, but I’m having another boy. So it’s okay.”


Here's a better question than true/false: Which news item is true but ought to be false, and which is false but likely to be true as well?
Posted by PDiddie at Tuesday, June 04, 2013

After the session adjourned Rep. Alvin was questioned about the joint he had in his pocket and his remarks made in opposition to the bill.

“Well obviously state legislators enjoy special privileges that other people do not” he stated. As for his stance towards the penalty reduction bill he remarked “times are tough, budgets are tight and we have to make the best use of the state’s money. Having our police focus their time and effort on keeping these dangerous criminals away from society is a major priority, not to mention the jobs we are able to create in the prison and judicial system in general. Without jailing these people, we could be looking at creating more unemployment. It just isn’t economically sound to let these people go with just a ticket. We must have zero tolerance.”

Most people that smoke this stuff don't come to such absurd conclusions.

*shaking head wondering what is wrong with some people*

State Legislators enjoy special privileges" which I guess includes smoking a joint, and getting a free pass?? If it does, and if it is.... that may be the understatement of the year.